Caribou Coffee has teamed up with a local grocery store chain in the Chicago area to grow its retail and footprint as well as to lay the groundwork for continued expansion, not unlike Starbucks' partnership with Dominick's years ago, which has since been scaled back. 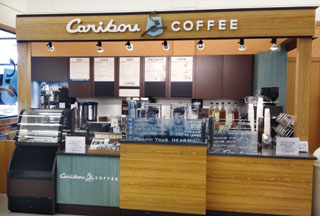 Caribou opened its first retail location within a Jewel-Osco in Barrington, Ill., and has plans to introduce five additional coffeehouses within Jewel-Osco stores in 2013, including in Hoffman Estates and Countryside.

Many of the design elements of Caribou's traditional coffeehouse stores have stayed the same, including the light wood paneling, plush seating, and idioms scrawled on glass. President and CEO Mike Tattersfield said the partnership was intended to open up additional coffeehouse settings throughout Chicago and perhaps beyond, as well as to expand distribution for Caribou's packaged coffee beans. The coffee chain owns and operates 585 coffeehouses, including 174 franchised locations in 21 states and 9 overseas companies, and plans to open an additional 60 to 70 locations this year.