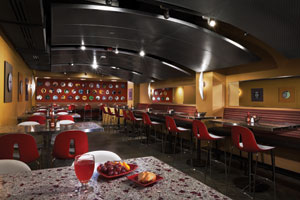 Booths and table seating under a sloped ceiling create an intimate dining environment at Plate. Photo courtesy of Mesher Shing McNutt; Robert Pisano, photographerResidence halls at Penn State University provide nearly 14,000 students of the total 44,000 graduate and undergraduate student population with housing and a community environment for socializing. Located at the center of campus, Pollock Halls is the third-largest residence area on campus. In August 2011, students were introduced to a massive renovation of the second floor of the Pollock Dining Commons. The 30,000-square-foot facility, featuring an all-you-care-to-eat (AYCTE) dining plan, was gutted and turned into a platform-style operation offering an enormous variety of food and beverages.

As part of the renovation, the 10,000-square-foot back-of-house kitchen space was refreshed to support the front-of-house dining operation. This was the first major dining hall renovation on this campus since that of Redifer Dining Commons in 2004.

"A change at Pollock was long overdue since it hadn't been renovated since 1991," says Lisa Wandel, director of residential dining who has worked at Penn State since 1984. "The old facility had straight-line serving counters and very little display cooking."

"Pollock's operation was efficient but not a great place to eat because food sat in a warmer for quite a while as customers walked through the line and customers all sat in one large room with similar types of seating," adds Jim Hopey, assistant director of Pollock Dining Commons. He joined Penn State's dining operations in 1982. He was intimately involved in the design process from its inception.

Introducing menu and seating variety was a primary emphasis given to the Pollock Dining Commons transformation. "Pollock Dining Commons serves students living at Pollock Halls and also any students, faculty, staff and visitors who wish to eat here," Wandel says. "Pollock also serves students who previously ate at Simmons Dining Hall, located between Pollock and Redifer. In 2011, Simmons was converted into a residence hall."

Wandel, Hopey and other members of the Penn State residential dining staff worked closely with the architects and interior designers at Mesher Shing McNutt and foodservice consultants at Porter Khouw Consulting to determine how Pollock could best serve a large multicultural population day after day during the academic year and give the dining commons longevity. "We conducted a lot of research with students, faculty, dining's full-time union staff, maintenance shop staff, our culinary team and managers," Wandel says. "We learned that our customers wanted everything from cheeseburgers and fries to more salads, vegetables and low-fat foods, which were very popular at Simmons. They didn't like huge seating spaces, and liked big tables at dinner but not at lunch. We had many considerations to take into account in order to transform this dining hall into a contemporary operation that would have relevance long into the future."

Wandel says she and other managers also visited several colleges around the country that had recently introduced renovated or newly built dining facilities.