When Neal Lavender arrived at Texas Health Presbyterian Hospital Dallas in December 2002 it quickly became evident that he would need to replace the facility's 36-year-old kitchen. Located in the hospital's main building, the kitchen had poor drainage, inconsistent power and inadequate storage and would no longer meet the needs of a growing hospital population. 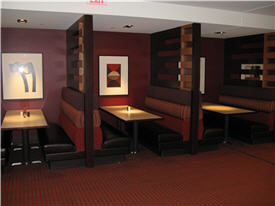 Café Presby’s seating areas were renovated in 2006 for a more-comfortable environment.

"The goal in building a new kitchen on the massive, four-square-block campus was to provide a state-of-the-art foodservice operation that could evolve with growing volumes of patients, staff and visitors," says Lavender, the hospital's director of food, nutrition and hospitality. "We needed the capability to provide innovative patient foodservice while being able to operate on a tighter budget. We also needed the capability to serve the retail dining operations and catering." 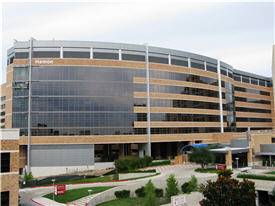 The new 177-bed, $220 million Hamon Tower stands six stories high with two lower levels, and occupies 460,000-square feet on the Texas Health Presbyterian Hospital in Dallas.
Three months after Lavender's arrival, planning began for 177-bed critical-care facility Hamon Tower, which would specialize in critical care. "My foodservice leadership team and I wanted the kitchen to be situated in Hamon because it was located at the center of campus. The positioning of the kitchen here would allow us to more easily transport food to all buildings," Lavender says.

Initial plans for Hamon did not include a kitchen, but Lavender convinced administrators that such a facility was necessary. The project's architects, HKS, Inc., then contracted Eli Osatinski, president of Systems Design International Inc., to design a new kitchen two levels below ground. "We did many conceptual drawings before we arrived at the right layout and equipment selection," Osatinski says.

The economic downturn, however, meant more adjustments to the plans for Hamon Tower. "Rising costs of materials and supplies can wreak havoc on established and approved capital budgets," Lavender says.

"For example, the price of stainless steel went up 20 percent from the time the project was in its planning stages until it was completed, so we had to make cuts," says Bill Cunningham, Texas Health's retail/production manager and chef, who came to the hospital in 2003. "The original plan called for two flight-type dish machines but we cut back to one by rescheduling labor hours. We also had six combi ovens in the original plan and cut back to five, and a test kitchen with combi-oven, range, fryer and more was put on hold, Cunningham says. "Though the gas lines are still in this space, we couldn't afford to put in the equipment. We will do it some day."

Another alteration was necessary when cutbacks in labor were required. "We built the kitchen to get away from a traditional trayline," Lavender says. The new kitchen contains a hybrid system with three pods for patient-tray assembly.

The hybrid system came as a result of Lavender's benchmarking against three hospitals with high patient counts: Shands at the University of Florida Hospital in Gainesville, Florida Hospital in Orlando and New York University Hospital in New York City. "With the pod system, each staff member works in a very high capacity," he says. "And, if the census is low, we can close one of the pods. We complement the pods with retherm equipment that goes to the floors where trays are then distributed to patients." 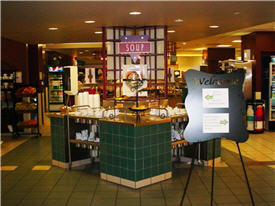 The new kitchen produces food for two cafes, including Café Presby in the original main building. Total annual sales are $2.2 million in this unit.

Consideration was given to Hazard Analysis Critical Control Point (HACCP) guidelines. The design includes easy-to-clean, features, making it easier for the facility to remain complaint with local health codes. Following HACCP guidelines also allows the facility to remain compliant with Joint Commission standards. (The Joint Commission accredits and certifies more than 17,000 health care organizations and programs in the United States.)

For example, the kitchen includes a large number of stainless-steel work surfaces that are easy to clean: a double-cart roll-in blast chiller; centralized bulk storage with a HACCP check-in area for quality and safety control to complement the HACCP requirements; a computerized temperature monitoring system that alerts the key members of the foodservice team when temperatures get into the danger zone, an emergency power system; a patient-services cold environment and an elevator designated for transporting food and related equipment.

"Another important aspect of the kitchen design was a comfortable staff break room with computer access, television and DVD player to support employee training," Lavender says. "Kitchen employees must use a computer to take mandatory training sessions, choose their annual benefits, and watch streaming videos. Providing computer access is a must because not all of our staff have access to a computer. Furthermore, this is a private area and we can have many employees here at one time. Our last break room sat about 10 people with a staff of 120, so this is a very important addition."

Food deliveries arrive at the Support Services Building (SSB), about 20 yards from Hamon. This warehouse includes two 30-foot-high walk-in coolers, a 30-foot-high walk-in freezer, and dry storage, all of which hold a week's worth of food, as well as emergency food and supplies. Staff move food from the SSB storeroom to the kitchen via an underground tunnel. "We all felt this SSB storeroom would be less expensive to build and maintain than if it were inside Hamon," Osatinski says. "Also, the trucks could not get into Hamon because it is in the center of campus. Osatinski adds that when the SSB storeroom became operational, a decision was made to centralize all foodservice loading docks to SSB, as well."

Staff place food from the SSB storeroom into the kitchen's walk-in coolers, a freezer and ambient storage. "The kitchen's design allows food to flow from storage to production to tray assembly and out," Osatinski says, adding that its horseshoe configuration allows production and finishing teams to work side by side and communicate among themselves and with the finishing and tray assembly."

"We were blessed with a lot of space and room to grow in the storage, production and patient-services areas," Lavender says. "In addition, the flexible kitchen design allows us to adjust staffing levels as needed to serve as many patients, childcare center, staff and retail customers as we have.

"We also chose to go with mostly gas-fired cooking equipment due to the fact that it is more efficient, heats faster and lasts longer with less maintenance," Lavender says. "Start-up is quicker in the early morning so there is less down time. And in the event of a disaster, natural gas is more likely to be available than electricity."

Energy-saving measures include Energy Star-rated equipment, sensors that turn off lighting in unoccupied areas, and exhaust hoods that use fewer cubic feet per minute (cfm) than conventional hoods.

Bread, cakes, pies, cookies, cobblers and other desserts are prepared in the bakery area set up with ingredient bins and shelving, baker's and work tables, sinks, oven racks, 20-quart mixer, can opener, overshelves with utensil rack, proof cabinet and rack oven. An adjacent prep area also supports production for the bakery and hot food with a 140-quart mixer and other equipment similar to that found in the bakery area.

Turning to the bulk-cooking area, 40- and 60-gallon kettles cook sauces, vegetables, boiled eggs, pasta, rice and beans for casseroles, side dishes and entrées. Also used are a food cutter, food processor, 20-quart mixer, meat slicer/trimmer, bain marie heater and fill faucet. Thirty- and 40-gallon skillets are used for beef stew, stir-fry and rice; a four-burner range warms sauces and pasta. Many of the items made here are transferred to a large blast chiller for three-day storage.

Combi-ovens are the kitchen's workhorses. "We use the combi-ovens to cook or finish 80 percent of our menu items, including most proteins, vegetables, potatoes, ready-to-cook items, purées and scrambled eggs," Cunningham says. 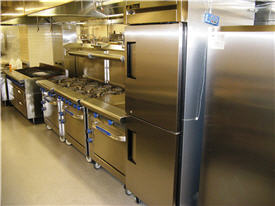 Entrées such as roasted salmon with balsamic maple glaze, blackened tuna with sweet lime sauce and beef tenderloin with mushroom demi-sauce are finished in the bulk-finishing area, with equipment including a countertop fryer, griddle, and broiler, four- and six-burner range with ovens beneath and reach-in freezers and refrigerators. A cook-and-hold cabinet stores completed items destined for the pods or cafeterias.

From the pods, bulk-transport carts transport food to the dining and catering areas. Though it is too early to know the pods' effect on satisfaction scores, patients have been complimentary. "We have increased staff productivity," Lavender says. "With the previous kitchen trayline, we had 13 positions that were required daily. We now run at 10. Our stretch goal is to get to nine by 2010. Still, we are certain that scores will go up." Lavender acknowledges that the first few weeks were anything but smooth. "We had a flood due to a mishap with a sprinkler head, some equipment didn't fire up, and we had power and water issues. We rushed to get into the tower and had a short window to get staff trained and everything up running."

"We had training challenges because cooks were learning to use new equipment, making the transition to gas from electric, and just managing change," Cunningham adds. "Also, we should have started with a non-select menu for a couple of weeks to ease into the new patient-services model, which featured pods. We also had a very short window to review equipment installs before we moved in on August 4. If we had it to do over again, we would not rush it like we did."

Flexibility for growth was built into the plan. "There are also many opportunities for our department to extend its services to smaller local hospitals," Lavender says, adding that the life of this new kitchen will be at least 50 years. How the equipment is maintained will no doubt contribute to this facility's longevity.