An upscale Asian restaurant and bar offers guests at San Manuel Casino a dining and beverage experience never before available at this 30-year-old property that sits 60 miles from downtown Los Angeles. Hong Bao Kitchen, which features cuisine found throughout China and surrounding regions such as Vietnam, Korea and Japan, operates from between two new gaming spaces: high-limit tables and a high-limit slots room. The restaurant, which sits on the first level of the casino, replaces a sports bar and grill. 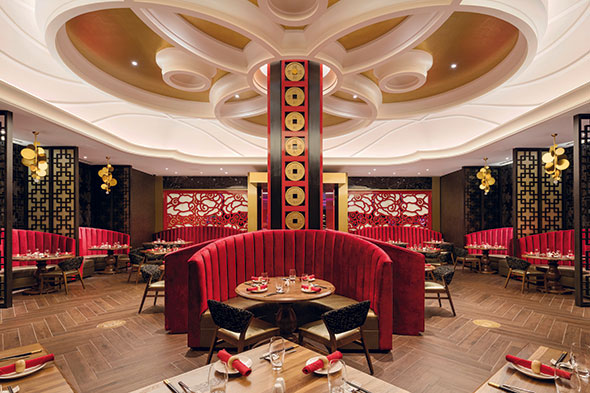 “We selected an Asian concept to provide a memorable experience for our loyal guests, who have wanted an Asian restaurant for some time, and to attract new guests who are interested in Asian cuisine,” says David Kopasz, San Manuel’s chief operating officer for Hospitality. “We made a conscious decision to invest the time and money to create an upscale, authentic, Asian-inspired concept absolutely right. To do that, we had to remove everything from the old grill space and rebuild from the ground up.”

The restaurant’s name comes from the Mandarin word “hongbao,” which means “red envelope” and is synonymous with happiness, luck, goodwill and good fortune. The mission for the architects and interior designers at Klai Juba Wald in Las Vegas was to create a playful environment with pops of bold color and true Asian references. “We wanted to bring the liveliness of the bar and casino into the space and have the restaurant act as a hub for the new gaming area,” says Ann Fleming, principal of interiors for Klai Juba Wald. 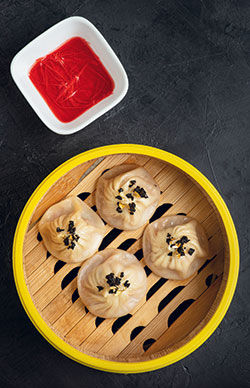 Chefs at the dim sum station cook savory specialties such as shrimp dumplings, lobster dumplings, steamed pork dumplings and black truffle xiao long bao. The intimate and welcoming destination also pays tribute to the San Manuel Band of Mission Indians, one of several clans of Serrano Indians. “We paid homage to the tribe with a ceramic obsidian sculpture in the front entry, a nonnative material often used by the tribe to make arrowheads and found on Serrano land,” says Kelly Scherbenski, associate and senior interior designer at Klai Juba Wald. The entrance also features two laser-cut screens in the shape of clouds, which represent good luck and bring positive energy into the space.

“The existing footprint of the restaurant had a significantly large column in the center,” Scherbenski says. “Our solution was to feature the column in our design and use it to create zones for different dining areas.” Chinese coins decorate the center column, symbolizing money, good luck and abundance. Plain sliced, red oak-stained wood creates divider walls at semiprivate dining booths. Repurposed vintage teapots sit on the shelves as artwork. 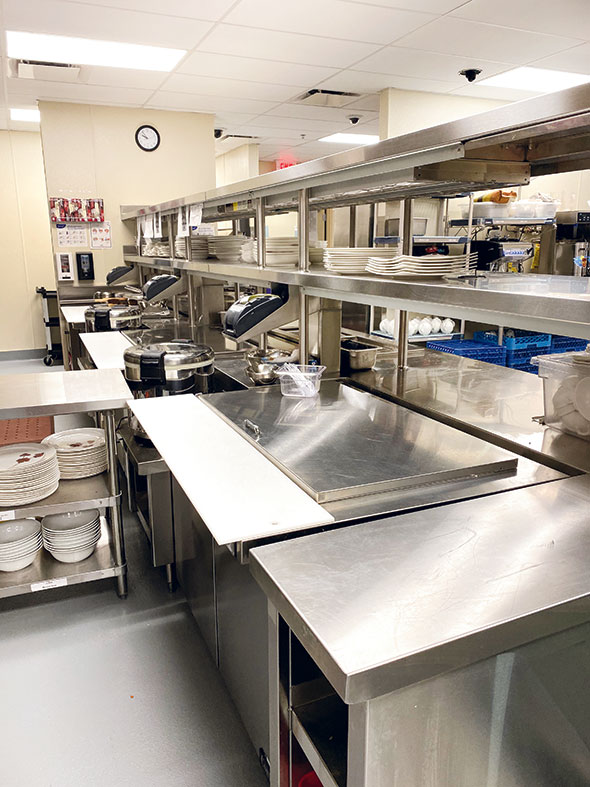 The layout of the chef’s counter allows staff to produce large quantities of menu items throughout the day and evening.After food arrives at a loading dock on the casino’s lower level, culinary staff place ingredients on carts and bring them up in a dedicated elevator to the next level. They walk the carts down a corridor, through swinging doors, and place the menu ingredients in a walk-in cooler, walk-in freezer and dry storage. “We installed roll-up doors rather than walk-in doors to make the space more efficient and cost-effective,” says John Egnor, principal, JME Hospitality, based in The Woodlands, Texas. “Space is money.”

The entire kitchen’s design follows classic flow principles so staff can move food easily from storage to stations to guests. Because the space is relatively small for the size and complexity of the menu, Egnor worked closely with the chefs to position stations and equipment for easy access. 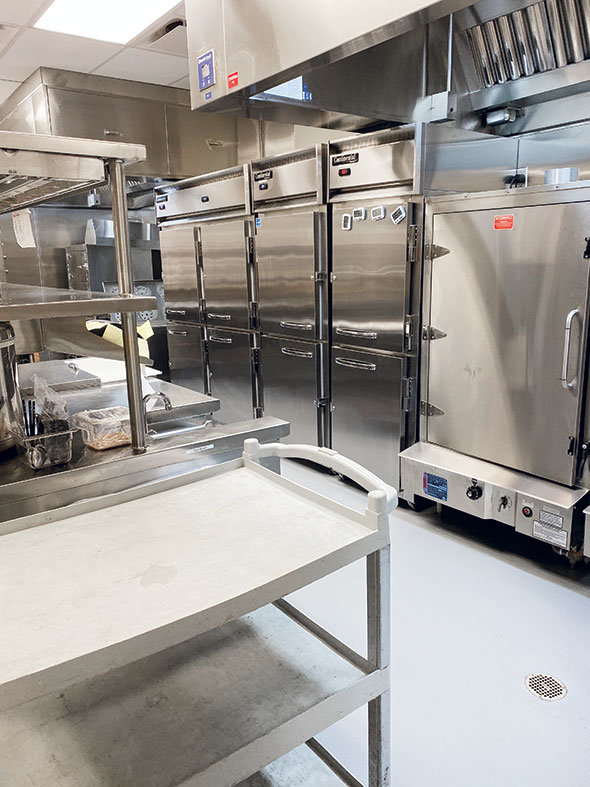 Junior chefs take food from storage as needed and bring it to the various preparation stations. The entire kitchen is enclosed and not visible to guests. “We were given a particular area for the renovation and did not have the space for an open kitchen,” Egnor says. “Even if we would have moved the kitchen, we couldn’t have placed it anywhere that would interfere with cellular raceways that run beneath the gaming areas to power them.”

The heavy production area contains a tilting braiser, tilting steam-jacketed kettle and two stockpot burners for making soups such as hot and sour with seafood, wonton, and chicken ginseng, as well as broths and sauces.

Peking duck ranks as the restaurant’s main specialty item. Culinary staff wash the ducks and allow them to soak in a brine solution for three to four hours. They then pump air under the skin through the neck cavity to separate the skin from the fat. Staff plunge the ducks into boiling water for one to five minutes, and then hang them to dry in cabinets for up to four days. The cabinets, which can hold 60 ducks, must maintain a temperature of less than 40 degrees F and 40 percent to 50 percent humidity. This process tightens the skin and helps the duck achieve its traditional crispy texture. 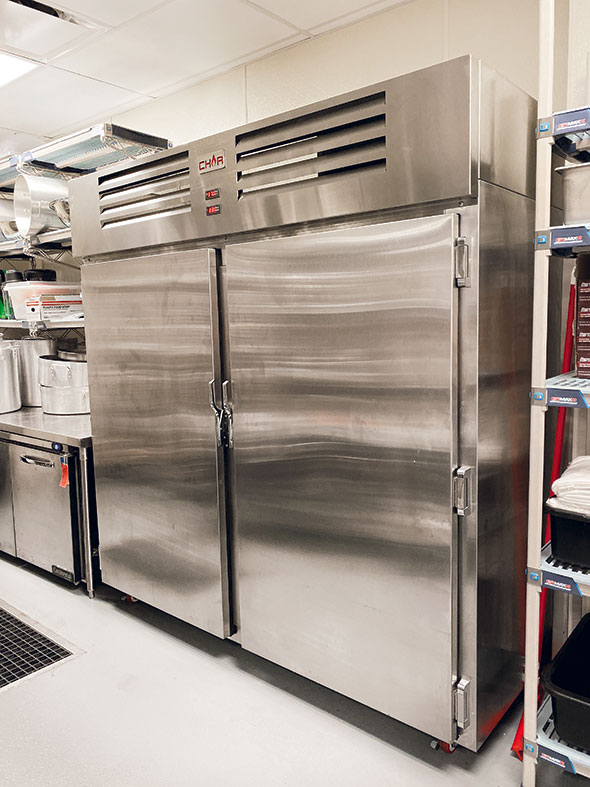 “We cook up to six ducks in each of two roasting ovens for about 45 minutes at 400 degrees F,” Zhang says. “This process allows the skin to get crispy while the duck meat stays juicy on the inside.” Staff place the cooked ducks on a cart and wheel them to guests’ tables, where they carve the birds. 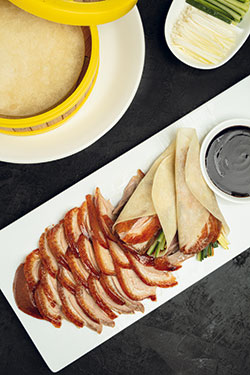 Peking duck, one of the restaurant’s specialties, receives an artful presentation.Photos courtesy of San Manuel CasinoThe culinary staff prepare 35 to 40 ducks per day. Staff alert customers that the wait is approximately 45 minutes for Peking duck orders. “During busy periods, we are cooking ducks continuously, so guests don’t have to wait as long to get their orders,” says Jerold Brooks, executive chef, San Manuel Casino. Staff also use the ovens to cook Shanghai braised pork.

A station with cutting boards, knives and rice cookers support staff as they prepare sushi and cold apps such as hamachi with jalapeño ponzu sauce and soft-shell crab rolls. A nearby 32-quart mixer allows staff to make batter for dim sum. 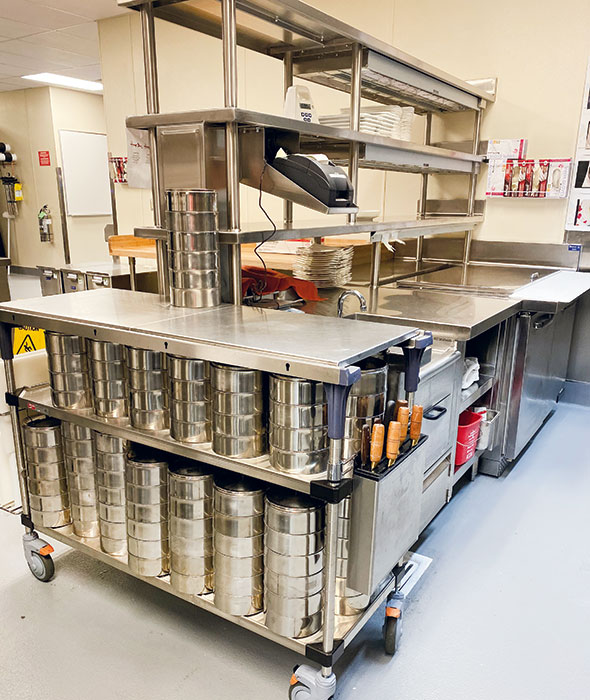 Preparation carts sit in this area and near other stations, and serve as prep tables that hold knives, cutting boards and hotel pans. “The carts can be moved wherever they are needed,” Egnor says. “The casters on these carts lock and don’t allow the carts to move, which is essential for carts that aren’t always positioned against walls. Because we were working within a relatively small space, these carts give staff the prep space they need.” 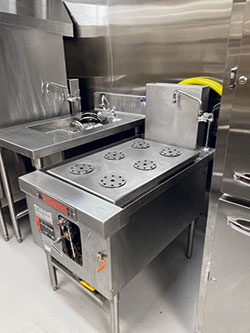 One of the essential components of the kitchen, a steamer, supports dim sum preparation.

The metal woks, imported from China, contain a clay lining. “Wok is ‘turbo power’ using forced air injection mixed with the natural gas that creates a heat temperature that far exceeds normal atmospheric gas combustion,” Egnor says. “Think of using a jet engine versus an open burner. It brings to a rolling boil a quart of water in less than 5 seconds or heats oil to 375 degrees F in less than 12 seconds. The hotter the oil, the better the result.”

The wok area also contains smaller burners that hold stocks and salsas. Nearby tables hold ingredients such as spices, salts and sugar.

The chefs and design team agree that this restaurant concept works only with the right equipment. “The only way we can produce authentic menu items is to have equipment that allows us to cook at the proper temperatures,” Brooks says.

In the dishroom, the food waste scrapping system contains scrapping nozzles on the trough. “This system is more efficient for employees because employees don’t need to constantly reach for the handheld spray nozzles and water isn’t spraying all over the area,” Egnor says.

The bar contains many undercounter and upstanding refrigerators and ingredient rails to allow in-house mixologists to practice their craft. This mirrors the setup in the casino’s high-end gaming areas nearby. The highest-end cocktail, Rare and Fine, features rare and expensive American whiskeys and a 100-point Bordeaux served in a keepsake Lalique crystal glass along with a diamond and 14k gold cocktail pick — for a cost of $10,000. 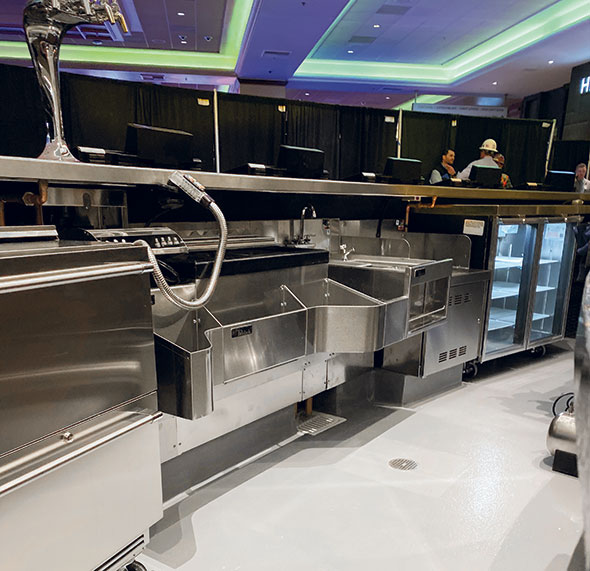 The project team recognized from day one of their planning that Hong Bao had to provide guests with an authentic Asian experience they would long remember and couldn’t find elsewhere nearby. The equipment contributes as much as the decor and carefully sourced ingredients.

Marco Davis, project manager, Klai Juba Wald. Davis joined KJW in 2019. An experienced project manager and designer with a history of working on hospitality projects for more than 16 years, he is a native of Los Angeles and now lives in Las Vegas. 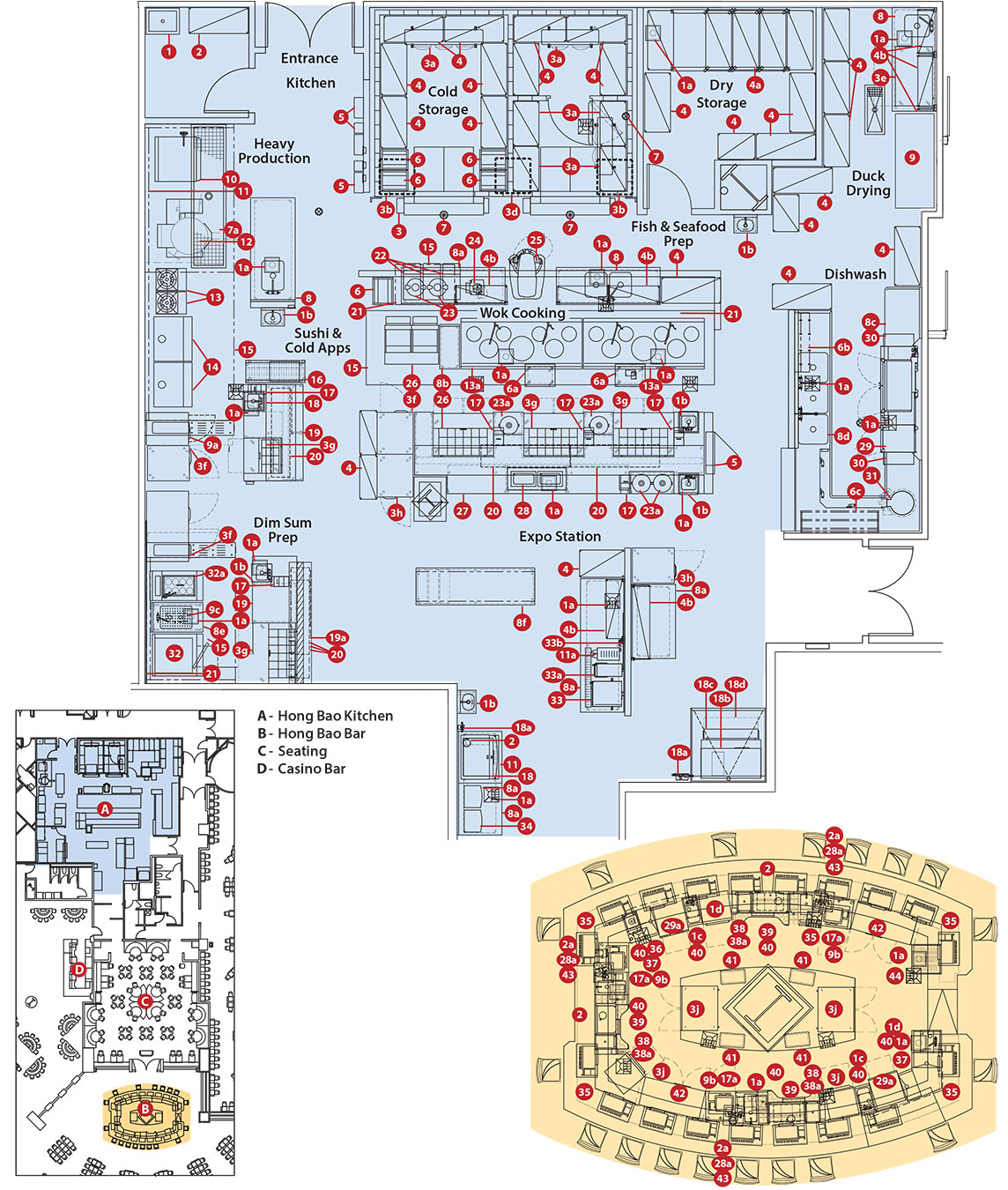