Harvard University’s John F. Kennedy School of Government, also called the Harvard Kennedy School (HKS), embarked on a major construction project to enclose its assorted buildings and bring them into a connected network. Its foodservice facility, designed more than 40 years earlier, had long outgrown its kitchen facilities. “The mission in creating a new cafe and kitchen space was to make a more robust cafe, with a kitchen and all relevant storage immediately connected, that could support a healthy, sustainable community with growth,” says David Davidson, managing director for Harvard University Dining Services (HUDS).

The project started in 2015. In July 2017, HUDS moved into a new cafe and kitchen space that for the first time brought all staff, equipment and storage together on one floor within one contained area. The facility opened officially in September 2017. “During the two-year construction span, the team navigated multiple closures or reductions in available spaces and services, so when the new dining facility and building were fully occupied and operational in early winter 2018, it was cause for a grand celebration, for which the HKS team set the table,” says Robert (Bob) Leandro, director for operations and facilities for HUDS. 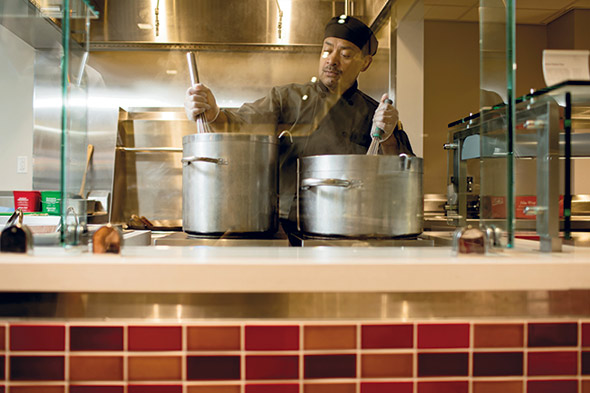 During the year, cafe sales constitute about 20 percent of total sales, while catering contributes 80 percent. “Both operations are supported by the kitchen, so we had to provide enough staging space for hot and cold carts and give easy access to trucks that drive up and down the loading dock,” says Leonard D. Condenzio, FCSI, CEO of Ricca Design Studios in Greenwood Village, Colo.

Food deliveries arrive at an underground loading dock entrance. “Before the new building, we didn’t have a designated loading dock,” Leandro says. “We had to wheel food and supplies across a courtyard. Now, we have a well-secured, indoor loading area that also contains an area for trash. It’s beautiful and functional.”

A receiver checks in deliveries before staff bring items up a ramp to the main kitchen. Staff place food and supplies into storage, including two walk-in coolers, a walk-in freezer, upright refrigerators and dry storage. Chefs and other culinary staff visit this storage area to pick up what they need for the day’s preparation.

Equipment in the cold prep area includes a food processor, a slicer and a small immersion blender for salad dressings, juices, sauces and soups. Staff use a larger, 60-quart mixer for making mashed potatoes, whipped creams and meringues. “We can place the ingredients on racks, refrigerate them and deliver them to the salad bar, which is very efficient,” says Laurie Torf, retail area general manager for HUDS.

In the hot prep area, staff use two 60-gallon kettles to make soups, sauces and pasta and to rethermalize soups from the Culinary Support Group, a campus cook-chill operation. In the tilting skillet, staff prepare stir-fries, braised corned beef, shallot-simmered turkey tenderloins cut into smaller pieces (tips), other hot entrees, such as chicken piccata, and vegetables. 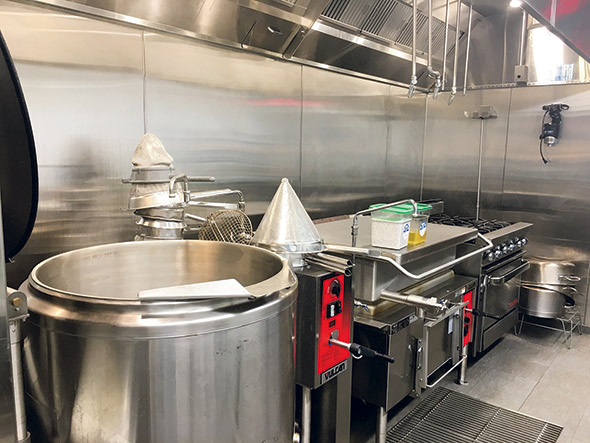 A six-burner range, tilting skillet and steam-jacketed kettle support production of menu items for the cafe and catering. 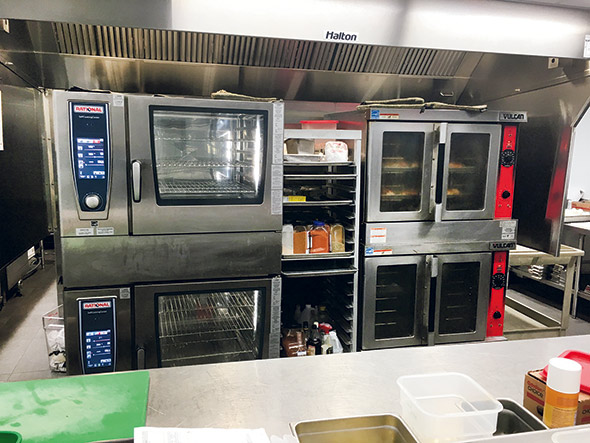 Combi ovens and convection ovens allow staff to cook meats, vegetables and casseroles for the cafe and catered functions.

Staff use the fryers to make french fries, locally caught beer-battered fish, and chicken fingers. They use the range to prepare demi-glaze and small-batch sauces, and a the flattop griddle and charbroiler to prepare eggs and burgers.

“There is a clean path between the clear and dirty dishes,” Leandro says, “so there is no cross-contamination.”

The colorful salad bar greets customers when they enter the HKS cafe.

The first station customers see when they arrive in the cafe is the salad area. “The salad bar’s oval shape allows appropriate, fluid circulation because people aren’t bumping into corners,” Condenzio says. Nearly 40 rotating selections sit in cold wells for customers to help themselves. The salad bar also features composed salads such as Caesar and panzanella, as well as composed salads made with quinoa and other whole grains. The cafe offers two soups daily, such as New England clam chowder and Caribbean chicken and coconut, plus a chili, such as Rocky Mountain or five bean. An undercounter refrigerator sitting beneath the salad bar holds backup ingredients. 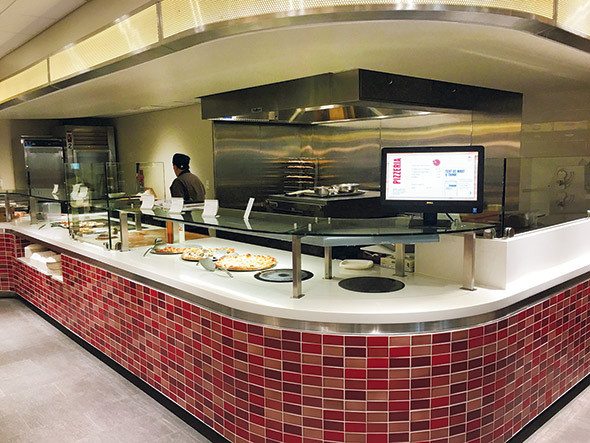 Staff prepare and bake pizzas before displaying them on hot decks. 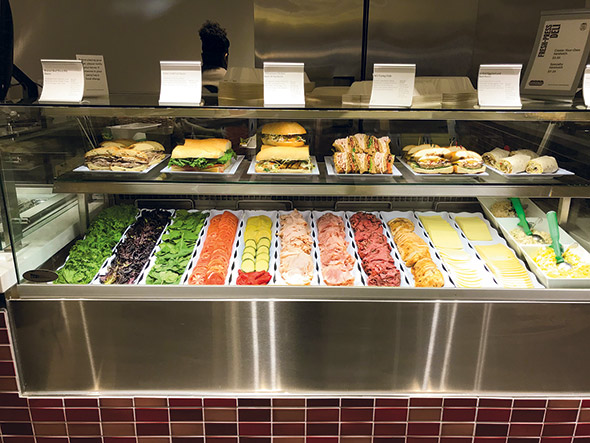 Display cases showcase ingredients and sandwiches at Fresh Pressed Deli, which staff heat in one of two panini grills upon request.

Customers rank the international area with pho and pad thai as one of their favorite stations, according to Torf. At the pho area, customers select from proteins that include roasted boneless chicken thighs, marinated tofu, shrimp, roasted pork, calamari, beef and salmon, a chicken or vegetable broth, and toppings such as julienned pea pods, bean sprouts, shredded carrots, sliced red onion hoisin, diced scallion, fresh cilantro, lime and sriracha. For pho, cooks warm noodles in warm water baths/baskets, assemble ingredients held in a refrigerated rail into a bowl and then ladle hot broth over them. The culinary staff finish pad thai in two large woks. 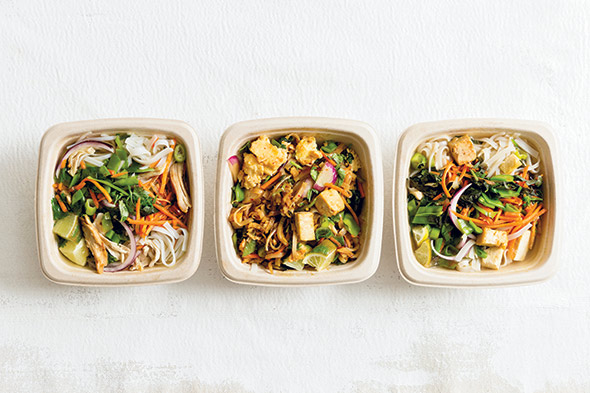 Pad thai bowls are among the cafe’s most popular menu items. Photo courtesy of Kristin Teig

A display of desserts such as cookies, tea breads, pound cakes and brownies sits near the coffee area. Beverages include a full range of drinks. Another beverage area holds two beverage coolers with bottled drinks. 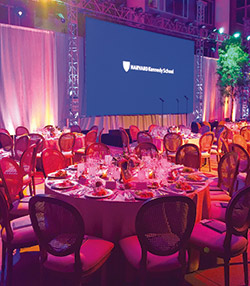 Catering constitutes nearly 75 percent of the Harvard Kennedy School’s foodservice business. Since catering constitutes three-quarters of the foodservice sales here, staff give attention to functions that may be as small as coffee and pastries for 10 and as large as high-end events for 400 people. Catering venues include classrooms, conference rooms and the Winter Garden, a glass-roofed atrium space. Staff prepare food in the kitchen and transport it to the catering rooms in wheeled push carts. The culinary team carefully review menus for allergies and dietary restrictions. “Dignitaries sometimes bring in their own chefs and work alongside our chefs in the kitchen,” Leandro says.

All cafe and catering menus are available online so customers can see nutritional analysis for each item served.

Before the cafe opened, HUDS conducted many training programs for staff. Manufacturers also held training sessions. “As a result, staff take a lot of pride in maintaining the equipment,” Torf says. “It looks brand new a year and half after it was installed.”

“The cafe and its catering have grown enough to make the operation self-sustaining,” says Davidson. “That allowed them to achieve a food cost of 24.5 percent, almost 4 percentage points under budget.” In the 2018 fiscal year, the cafe’s revenue increased by nearly $2 million, cafe transactions by nearly 42,000 and events by nearly 600.

Insights from the Architect

The dramatic change in the buildings was a main highlight of the Harvard Kennedy School project for architect George de Brigard, AIA, LEED AP, BD+C. He is an associate partner at Robert A.M. Stern Architects LLC in New York.

“The previous buildings at HKS were all opaque and fragmented. It was hard to see in and appreciate how active the school was from the outside, and on the inside everyone seemed to be hidden behind closed doors,” de Brigard says.

“In the new spaces, we focused on creating visual connections between spaces — connecting the inside the outside as well as creating clear lines of site between important functions,” de Brigard says. “We reinforced this with a consistent palette of stained American oak, from the fins of the brise soleil on the exterior to the wood slat ceiling that carries throughout the entire open plan of the first floor. The result is a whole new sense of community, built from materials of clarity and warmth, that has brought the school together in a new way,” de Brigard points out three additional key features of the project:

1. The unified environment. From the start, HKS project team members knew they wanted the project to create a real campus out of their collection of buildings — a campus that was a unified environment that invited engagement and discussion. Creating spaces and facilities that kept students and faculty on campus was a big part of the solution, and we knew that upgrading and expanding the cafe and dining spaces was key.

2. The double-height dining area. The heart of the new building is a double-height dining area, adjacent on one side to the new four-story Wexner Atrium and overlooked on the other by a large lounge. These spaces bring the whole campus together several times a day for meals, but also create a see-and-be-seen location to study, work in small groups, or just hang out.

3. The newloading dock. Before the campus transformation, the materials management at HKS, including food delivery, was in near crisis state. We inserted a loading dock in the midst of the existing buildings, covered by 23,000 square feet of extensive green roof, accessible by pedestrians and cyclists from two sides of the campus. This new loading dock solved many service and security problems for HKS while also untangling the vehicle and pedestrian circulation that had been creating headaches for decades.

Leonard Condenzio, FCSI, CEO, Ricca Design Studios. Condenzio brings 45 years of experience in all facets of dining services. He is involved in ideation, planning, concept and schematic design, and he oversees the design process. He creates and drives the project vision, adheres to programming and provides strategic planning.

David Davidson, HUDS Managing Director. Davidson started his two-decade affiliation with HUDS as a retail cafe manager in the 1990s and worked his way up. He now directs the overall program providing residential, retail and catering services on campus, representing $69.5 million in annual revenues and serving 5 million meals annually.

Serie Demelo, HKS general manager. Demelo joined Harvard 30 years ago. She took on the leadership of Harvard Kennedy School operations when Harvard assumed operation of the space from a contract vendor in 2013 and has led the team through year-over-year growth ever since.

Phil Landgraf, principal, Ricca Design Studios. With nearly 11 years of experience managing public assembly, business and industry and education projects, Landgraf joined Ricca Design Studios in 2014. Prior to his career in culinary design, he held a position as a teaching assistant/fellow at Johnson & Wales University in Denver.

Robert (Bob) Leandro, HUDS director for operations and facilities. Leandro’s 45-year employment with HUDS started in the kitchen. He has held a variety of positions, including general manager and assistant director for residential dining. Promoted to his current position in 2005, Leandro oversees maintenance and renovations and is the environmental safety and compliance manager. He was integral in the LEED Silver Certification awarded to the Dunster and Mather dining hall renovations.

Ernie Quinones, HKS executive chef. Quinones joined Harvard in 2016 as executive chef at Harvard Kennedy School, where he leads the culinary team of a full-service cafe and a catering department whose guests include heads of state, leaders of government, and members of the armed forces.

Laurie Torf, HUDS retail area general manager. Torf oversees roughly half of HUDS’ retail operations. She has worked in both the residential and retail divisions for more than 18 years. She has extensive experience in all areas of operations, with a special focus on large, complex facilities. 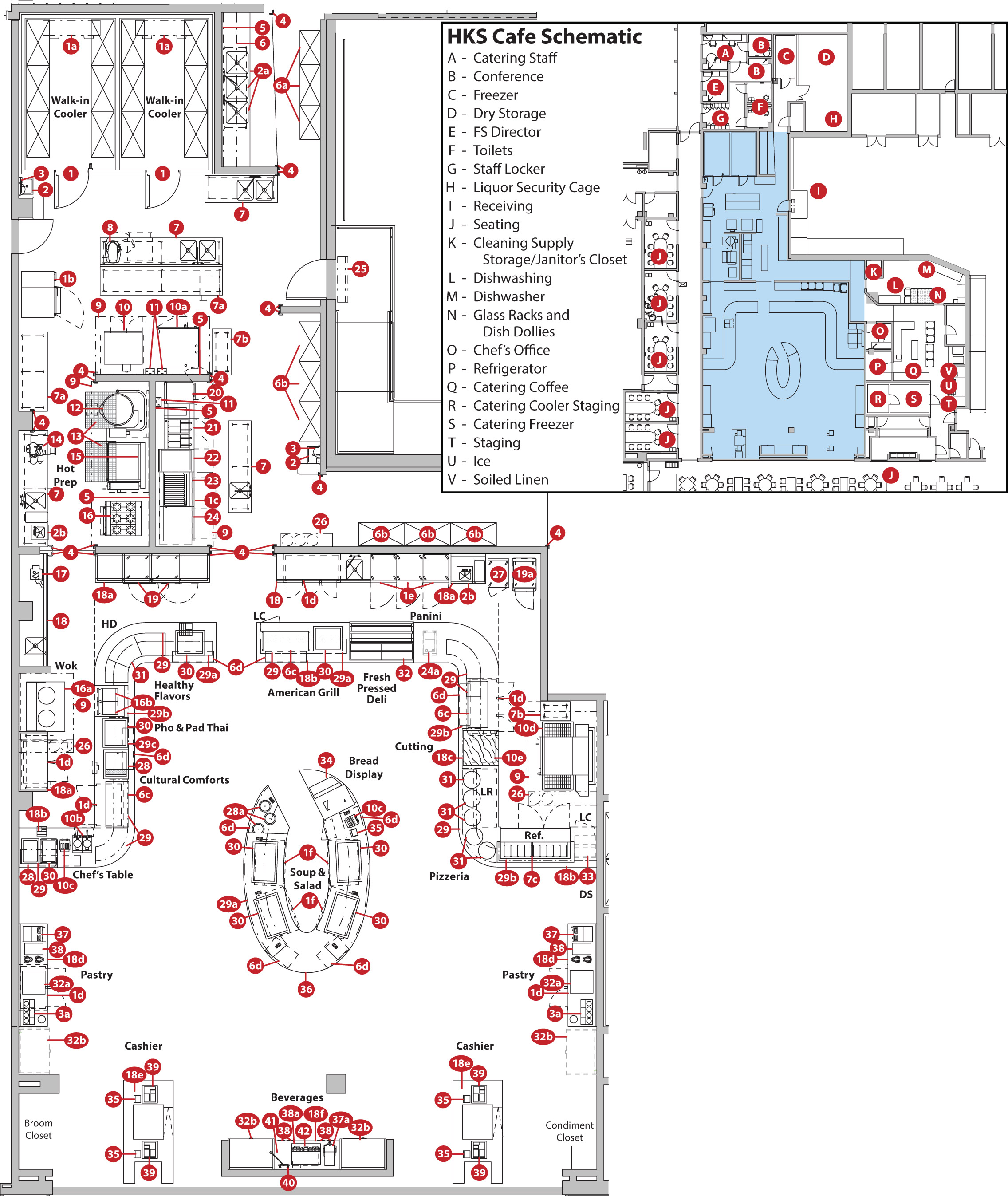