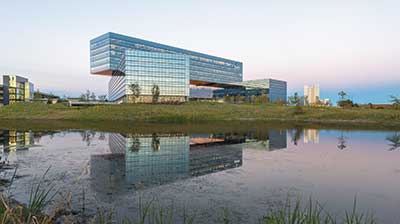 The headquarters of Zurich North America in Schaumburg, Ill., (a northwest suburb of Chicago) serves as home base to approximately 3,000 employees and contractors. Zurich North America provides business insurance, including workers' compensation, liability and property insurance for construction companies, auto dealers and technology firms, among others. The 783,800-square-foot building earned LEED Platinum certification from the U.S. Green Building Council. The project began in April 2014, and the building opened in October 2016.

Zurich Café and the dining atrium contribute significantly to Zurich North America's 83 percent employee satisfaction rate with the new facility. "We're extremely pleased with participation, which is more than 30 percent of the population on a daily basis," says David Yanda, general manager. "Every day, each station offers a new daily special so customers always find something new in the cafe."

"We conducted a series of employee focus groups to identify the types of foodservices employees patronize when they aren't at the Zurich facility," says Theodore Farrand, FCSI, FMP, director of MAS and project executive for Washington, D.C.-based Cini-Little Foodservice Design Consultants. "Perceived value was at the top of the list, followed by a high level of interest in quality food offerings. We determined that if the new facility/operation concentrated on these factors, our design could achieve the project goal of the client's anticipated participation rate of 40 percent to 50 percent."

Low Ceiling in the Serving Area 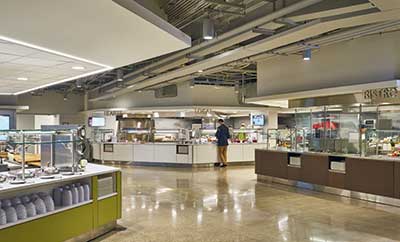 Hearth contains pizza, stromboli and calzones; Local features food from local restaurateurs, and Bistro offers burgers and grilled menu items.Farrand and his colleagues, including Armand Iaia, FCSI, regional manager and project manager, used Building Information Modeling (BIM) to coordinate between foodservice design and other members of the design team. Due to the grading of the property, the dining area, kitchen and servery are below grade, with the dining area situated so its windows and doors open to a prominent walk-out patio. The dining area also opens to the lobby above.

As a result, the ceiling height in the serving area was lower than is typically desirable, which put limits on the placement of hoods and ductwork.

"This required careful coordination with the mechanical, electrical and plumbing [MEP] trades as well as with the architectural team to get these items fitted in as we required," Iaia says. "The lower ceiling height in the servery and kitchen resulted in conflicts between foodservice and mechanical installations such as plumbing and HVAC ducts. A number of walk-ins and exhaust hoods ended up being designed with custom heights atypical of normal construction to allow space for these utilities. Had these conflicts been discovered in the field during construction instead of preemptively, costs to field-modify or replace large equipment could have caused severe budgetary overruns." 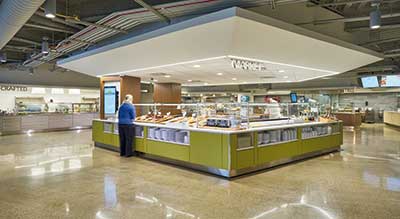 Market, the salad and breakfast bar, provides a make-your-own menu item experience. The station also features soup and sushi.The exhaust duct size that the building could accommodate also placed a limit on cubic feet per minute (CFM). "This required the use of a ventilation system with computerized dampers that would close exhaust hood ducts and reduce exhaust when it determined that there was no cooking going on under a hood," Iaia says.

The project team also faced budgetary constraints. The Zurich team wanted to enhance the participation rate by providing a place for staff to sit down and eat while collaborating with colleagues. "Since there are very few restaurants in the area, it was important to Zurich to provide attractive foodservices that the staff would perceive as an amenity," Iaia says. "The budgetary constraints meant that we needed to develop a classic servery design that would stand the test of time. We needed to make sure that it accommodated the current foodservice demands, and also future demands and differing food trends, without costing Zurich additional money. We needed to specify equipment that could be of high quality and be flexible while at the same time fit within the foodservice design budget."

The initial estimate of foodservice equipment expenditures was considerably more than the project budget. "However, after rethinking and revising our designs, we were able to reduce it considerably, and provide a design that would successfully accommodate the future growth that the client projected," Iaia says.

Staff move deliveries from the loading dock into two walk-in coolers, a walk-in freezer and dry storage. The back of the house also contains a cook's cooler, paper goods storage and bottled beverage and soda storage. A designated catering area contains refrigerated and dry storage. "We had to be sure there was ample refrigeration and ambient storage space to accommodate deliveries by local farmers," Farrand adds.

In the cold prep area, staff use a slicer, 20-quart mixer, vegetable dryer, food processor and blender to prepare vegetables and other ingredients for mise en place.

This back-of-the-house kitchen not only supports the servery, it also provides food for grab-and-go service and catering services.

Pot washing takes place in the kitchen area. The dishwashing area, however, sits at the end of the seating area. "The architects decided where dishwashing would be located," Farrand says. "When we saw where the servery was positioned and where the two entrances and exits were located, we decided to place the dishroom where most of the people exit so they can easily take their trays and drop them off on their way out. People who are sitting farther away from the dishroom are very considerate and just walk a little further to deposit their trays."

The Servery and Display Cooking 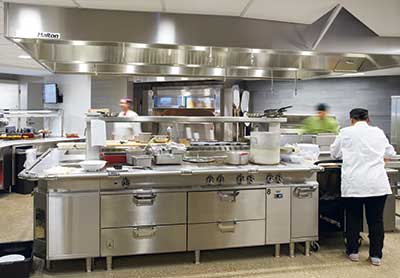 The cooking suite includes a charbroiler, griddle, range, soup wells, sink and refrigerated drawers beneath. The cooking area also contains freestanding fryers, a pasta cooker, and a pizza oven, which sit along the back wall.The servery's design incorporates equipment flexibility and positioning so the Sodexo culinary team can provide menu variety both now and in the future. In addition, station design allows for staffing adjustments to match the levels of customer demand. "Equipment is on casters so staff can roll equipment in and out as needed," Iaia says. "The mobile equipment contains a quick disconnect hose that facilitates this."

Much of the fresh food production at the cafe takes place at the servery stations. Though staff prepare a large volume of food during the peak times, their ability to cook in smaller batches in front of customers offers a more customized — and therefore popular — service approach.

Crafted, a deli-style operation, contains refrigerated rails, ambient wells, a microwave oven and a panini grill so staff can prepare create-your-own sandwiches along with panini sandwiches and specialty precrafted sandwiches that change weekly.

One of the most popular areas is Local station, where area restaurants feature their specialties on a rotating basis. For example, Thursdays may feature an Indian restaurant, and Fridays may feature Mexican menu items. "Sodexo arranges for small, local restaurants that are popular with employees to come in and prepare the food, which adds a high level of interest to the operation," Yanda says. Culinary staff also prepare made-to-order pasta dishes and other Italian menu items. 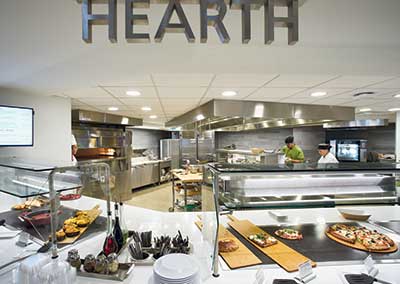 "This station is designed for display equipment and flexibility," Iaia says. The area contains a charboiler, fryers, soup wells and drop-in hot and cold wells. "Equipment can be rolled in and out as needed," Iaia says. "For example, woks can replace broilers or a range. An adjacent storeroom holds equipment when it is not in use. We had to figure out how to get the drain from the woks to fit into a floor sink so they drain properly when they are in use."

The Market is an irregular pentagon shape, and the station features 37 ingredients and 10 salad dressings for self-service salads. Chili and soups, one with meat and the other vegetarian, are also featured here. The center island area contains refrigerated and ambient storage to hold backup ingredients. "We've recently rolled out sushi made to order in an area that is situated next to the salad bar," Yanda says. 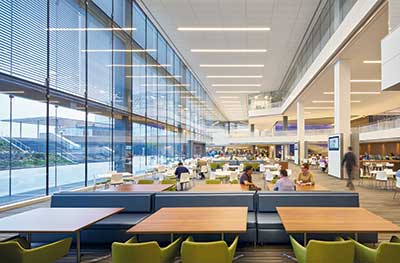 Natural light streams into the dining area. Automated shades regulate the amount of sunlight in the largely glass building throughout the day.The servery also features Simply to Go, a grab-and-go station offering premade salads, sandwiches and snacks. Cold items and bottled beverages sit in a refrigerated display unit with an air screen.

A large beverage island contains two large fountain drink dispensers on one side and coffee and tea brewers on the other side.

The ventilation system automatically balances the volume of air with the amount of cooking performed underneath the hood, thereby reducing exhaust volumes. "This was a key priority for this particular project because of the CFM limits," Iaia says. The designers also specified Energy Star equipment when available to satisfy LEED requirements and create a sustainable environment.

A few of the LEED Platinum certification highlights include:

After 13 months in operation, Yanda says, "We're very proud of the amount of business we're doing and how all three businesses — the cafe, grab-and-go and catering — stream out of one kitchen."

David YandaDavid Yanda, general manager for Zurich North American Headquarters. Yanda joined the company in 2016. Previous to this position, he was the director for Millennium Park Joint Venture in Chicago. 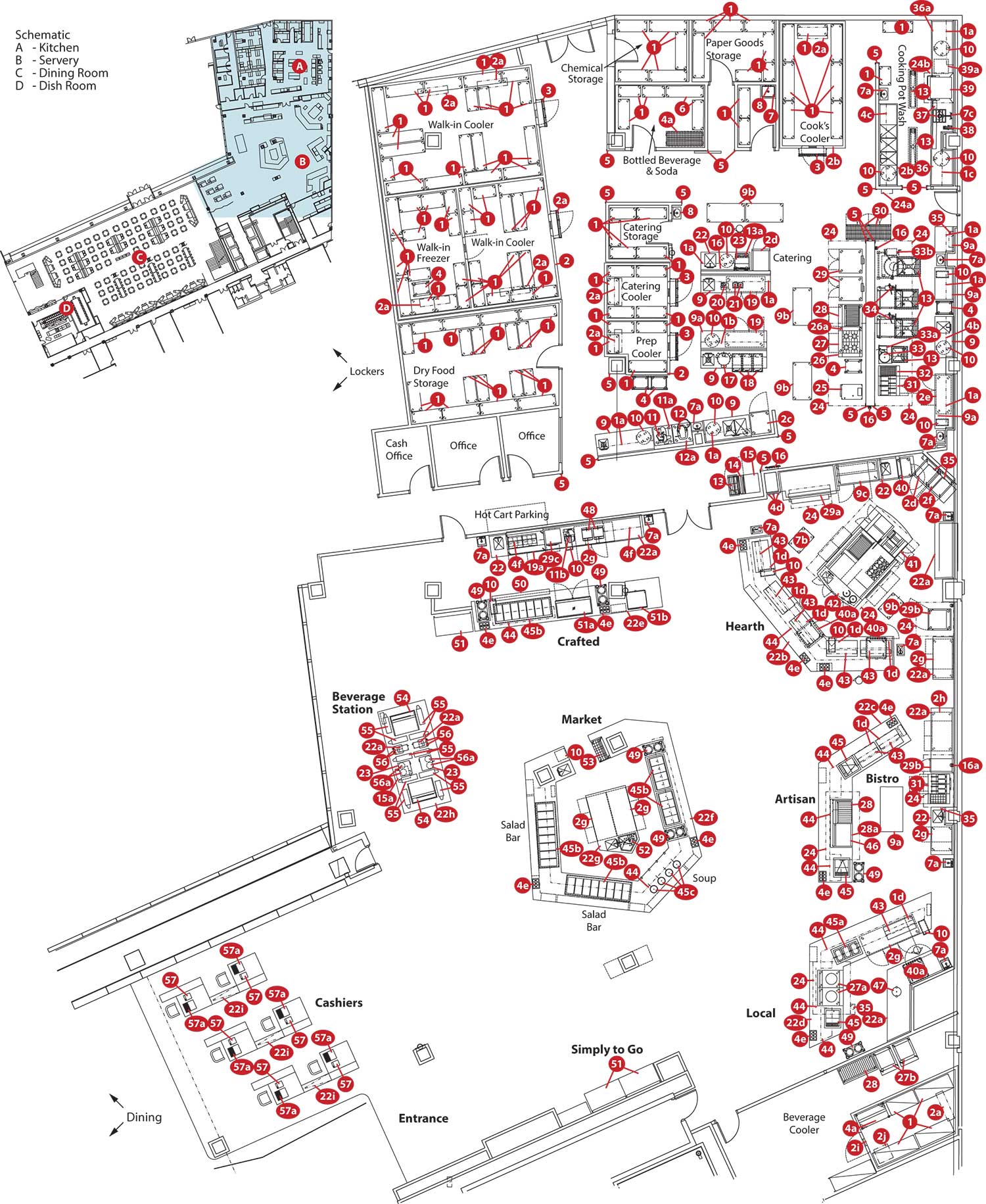