Conversion of a 73-year-old building into a contemporary housing, dining and learning establishment brings a fresh approach to a support kitchen and servery with micro-restaurants emphasizing local, fresh and colorful cuisine. 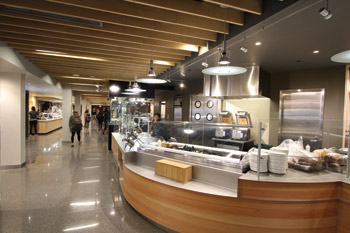 Since 1940, the East Quad residence hall at University of Michigan has housed many thousands of students. As part of a sweeping renovation of this World War II-era building, the project team's mission was to create a revitalized, living-learning community. "East Quad is considered a heritage building essential to the fabric and legacy of the university, so it was identified as a priority for renovation as part of a university-wide plan to improve the residence life on campus," says Christine Siegel, senior associate director for Michigan Dining. The building opened in August 2013.

"The university's greatest mission on this project was to celebrate the many unique communities in the building yet bring them together as one single community," says Jane Cady Wright, principal, president and CEO of the project's architectural and interior design firm Hanbury Evans Wright Vlattas + Co.

"By providing significant transparency to the design as a whole, the various building functions are showcased and social interaction is encouraged," says Matt Pearson, principal, architect and project designer for Hanbury Evans Wright Vlattas + Co. "We wanted to maintain the integrity of this college that emphasizes the arts and provides a residence life component. In addition to the residence rooms and foodservice, the building houses art studios and a theater. Also, many students, faculty and visitors speak different languages, so there is a multicultural component that weaves its way through the building. This, in turn, becomes evident in the food venue design."

"Bringing natural light deep into the building was a design goal," Pearson adds. "The building now has open, light-filled spaces that were previously left dark and unadorned, with views to the outside. Areas of the building that were once avoided by users now have become destinations."

The building's atrium exemplifies the use of glass, which encloses the space while allowing natural light to reach into what were once dark areas. "The new exterior facade design, comprised of large amounts of glass framed in modern limestone, allows the older stone facade of the interior to be visible from the courtyard," Pearson says. "Social activities are clearly seen from many vantage points, and natural light can reach the lower level with ease. Warm tones of the wood ceiling and art wall are a soft buffer to the masonry wall with framed steel openings."

The project also included an overhaul of the building's foodservice operation. "We're updating dining facilities campus-wide to allow for more contemporary menus and style of service, as well as improve student satisfaction," says Siegel. The foodservice overhaul consolidated two separate dining halls and serving lines into a single, modern dining facility that can easily support all-you-care-to-eat and retail modes of service. It includes a production kitchen on the lower level, seven micro-restaurants and a café on the main level, two seating areas adjacent to the servery, another seating area in a private dining room and yet another in the café.

"The dining facilities draw faculty, staff and students together during all hours of the day," Pearson says. "The circulation and the dining entrances were refined and strengthened to provide visible and physical connections and to market the activity of people and fresh food being prepared before one even enters the dining space. Because a theme of local, fresh and colorful produce runs through the venues, the material palette of the venues includes wood tones, vibrant color accents paired with soft muted tones and a state-of-the-art lighting design so the architecture can seem as natural and fresh as the food."

"A major project goal was to design a dining facility that supports sustainable dining practices," says Siegel. "About half of the students who live here are part of the Residential College, and they want us to support sustainable practices, such as going trayless and engaging in local procurement. We also designed a facility that will conserve energy and water and reduce waste."

Given the age of the building, the design team faced gargantuan challenges. "The original design positioned the kitchen in the center of the dining facility with two identical serveries, each supporting a dining room," says foodservice consultant Mona Milius, vice president and senior principal for Bakergroup Foodservice Design. Milius' consulting team also included James Sukenik, president, and Stephanie Occhipinti, project manager. "In the former operation, one servery handled breakfast, lunch and dinner service, and the other servery was open for late-night service.

"In the renovated operation, both dining rooms and the private dining rooms are still necessary to handle the demand; the private dining area and one of the dining rooms are used by students dining together at particular language tables, the other is for students not involved in the language table program," Milius continues. "In the past, students went into one side of the building for service then carried their trays outside the dining area through the residence hall common areas to the other dining room. The challenge was to connect both dining rooms so students didn't have to leave the dining facility to gain access to dining seating and to connect them to dish drop-off."

The designers solved the problem by building a dish drop-off area for each dining room. In addition, the kitchen was relocated to the lower level, underneath one of the dining rooms. "Locating the elevator to bring food up from the kitchen to the micro-restaurants was tricky because it had to work with receiving, storage and kitchen production on the lower level and connect to the micro-restaurants on the level above, while not being visible and disruptive to students in dining," Milius says.

A narrow space for the servery also presented challenges with flow. "We balanced out positioning different restaurants based on their popularity, stepped up the service areas to improve speed of service and planned for customers' ability to navigate their way through the space," Milius says.

The low ceiling throughout the space and the multiple floors of residence hall rooms above the servery and kitchen created challenges for installing and running ductwork. "The whole facility was very space tight; every concept and dining area were an exercise in designing inches," Occhipinti says.

"We worked with an existing column grid structure that was rather tight," adds Pearson. "This could potentially cause problems with circulation flow, seating arrangements and the layout of foodservice equipment. Rather than look at the columns as obstructions, we used them to our advantage by incorporating them into the architecture either as an element or where natural barriers might be desired."

Dealing with low ceilings and noise from the servery also required attention. "We accomplished this by using a sound-baffle panel system at the ceiling level," Pearson says. "The baffles are essentially vertical fins that are spaced 14 inches on center, leaving the interstitial spaces exposed to the ceiling above, thus making the ceilings as tall as possible. The result was greater sound absorption from the cooking and flurry of activity in the servery, and allowing the space to feel and be as tall as possible."

Despite all of these challenges, the project team's creativity blossomed. 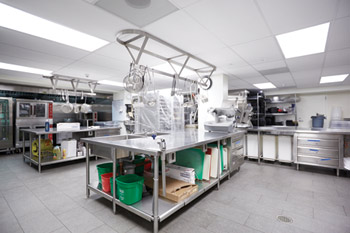 The kitchen was relocated to the lower level, beneath one of the dining rooms.

Product deliveries arrive at a receiving dock adjacent to the production kitchen. The large area allows for deliveries from distributors and local farmers. After staff check in products, other staff transport pallets directly through wide corridors to dry storerooms and vegetable and meat walk-in coolers. Refrigeration compressors are located on top of the coolers.

Each day, staff wash and prepare large quantities of vegetables for the restaurants. "We have four tables designated just for vegetables and two for meat," says Frank Turchan, executive chef for Michigan Dining. "About 80 percent of our produce comes from local farmers during the late summer and early fall. It falls to 40 percent in the middle of winter." The commitment to local and sustainable farms extends beyond produce. All meats come from within 200 miles of campus or within Michigan, and seafood is certified by the Marine Stewardship Council.

"We're serving many more vegetables and smaller portions of meat than in the past," Turchan adds.

Also in the prep areas, staff use a vertical cutter mixer to prepare hummus in a variety of flavors, including cilantro, roasted garlic and red pepper. A slicer cuts bread that staff bakes in the lower-level kitchen. A gelato machine produces at least a dozen flavors such as standards like strawberry and fun flavors such as chocolate chipotle and strawberry chocolate chip. The retail café upstairs displays and sells the gelato, which is an increasingly popular menu option.

Hot prep on this level allows staff to generate some foods in large quantities. Staff use a mixer for mashed potatoes and for stuffing. A tilting kettle cooks soups and sauces as well as pasta. A tilting skillet sautés and braises pork, pot roast and other meats, and cooks mac and cheese. Staff also use a steamer to cook menu items such as rice; a four-burner range to brown vegetables, make savory and sweet sauces, and start risottos that are finished upstairs; and a combi oven to cook meats, bread and pasta dishes such as lasagna. A double-stacked
convection oven roasts chicken, pork loins and vegetables.