Gordon Avenue Market at the University of Wisconsin–Madison 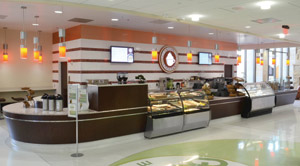 As part of the University Housing master plan at the University of Wisconsin–Madison, Gordon Commons, a decades-old dining hall, was slated for a much-needed renovation to meet evolving student expectations. Prompted by the high costs of alternative dining plans and the availability of some adjacent land, though, the planning teams instead decided to design and build a new facility.

The $34.1 million Gordon Dining and Event Center features 12 diverse à la carte dining venues, which include Gordon Avenue Market and a convenience store, all located on the building’s main floor. Meeting rooms occupy the second floor. The lower level of the building houses administrative offices for dining services and a central production area with three distinct spaces: central bakery, cook-chill and an entrée and catering area. Gordon serves the southeast area of campus where approximately 3,000 people reside, though all students, faculty, staff and the public are welcome here as well.

Constructed simultaneously with Gordon, the new 404-bed Dejope Residence Hall houses the Four Lakes Market, which includes a marketplace-style servery and a kitchen with centralized cold food production. A new 176-bed residence hall, New 32 Hall, will open nearby in August 2013.

The two projects had ambitious missions: update outdated facilities; customize menu offerings; provide value through the combination of extraordinary food and exceptional customer service; increase residential living space in order to provide on-campus housing for all first-year students who want it; add more meeting space to both sides of campus; and increase volume production capacity in these facilities.

Though Gordon and Four Lakes each had its own architects and interior designers, consultants at Robert Rippe & Associates provided foodservice design for both. “It was a challenge to do two projects simultaneously,” says Terry Pellegrino, principal at Robert Rippe & Associates. “The two residential areas have distinct cultures. Gordon is adjacent to a busy retail avenue and was designed to attract not only students, faculty and staff, but also the public. In contrast, Four Lakes, in the Dejope Residence Hall on the far west side of campus, is in a more serene setting near the lake, and lunchtime volume is small because students take classes in other parts of campus. We met with the architects separately, but there was a lot of coordination needed.”

Both facilities were introduced in the summer of 2012. Improvements are underway at the other housing and dining facilities on campus to bring them up to par with the two new dining locations. (For more information on Four Lakes, visit www.fesmag.com under the Facility Design Project of the Month tab.)

Gordon Gets a Fresh Start

The new Gordon replaces the 48-year-old Gordon Commons, which was demolished and will be replaced with green space. “Referred to as the cement bunker, the original Gordon Commons was built in 1965 to serve as the primary dining facility for some 3,000 students housed in nearby residence halls and as a central commissary for the university’s residence hall dining,” says Joie Schoonover, director of dining and culinary services for residential dining at the University of Wisconsin–Madison. “With a traditional, single-line cafeteria operation, convenience store and pizza operation serving three meals daily, Gordon was past its prime and out of step with the UW’s progressive, competitive, flagship Big Ten campus atmosphere.”

Occupying 99,800 square feet, with 67,000 square feet for foodservice, Gordon can provide dining and gathering spaces for 3,000 people, including students, staff, faculty and visitors. The facility includes 12 diverse à la carte dining venues and a convenience store offering groceries, school supplies and snack items such as nachos and hot pretzels. The complex contains 3 separate dining areas that can accommodate 600 people with various seating styles such as high tables, bar/counter seating, banquettes and traditional tables. A spacious fireplace lounge and a balcony overlooking the dining areas provide additional seating on the second floor. Upper-level event space includes a meeting room that can seat 300 as well as 3 additional 250-seat rooms that together can be opened into a single large room that seats 750. A separate formal dining/meeting room accommodates 20 guests.