The Original Carrabba’s in Houston

A new location for an old restaurant allowed this Houston operation to substantially expand its back- and front-of-house kitchens and place greater emphasis on its carryout business. 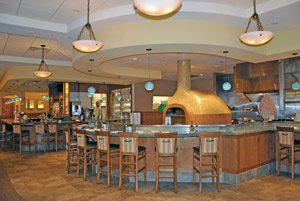 Photo Courtesy of Tom Cook, C&T Design and Equipment Co., Inc.After 26 years successfully operating Carrabba's in a location on Kirby Drive in an upscale Houston residential area, Johnny Carrabba realized the building had outlived its usefulness. The facility had originally housed a Sizzler steakhouse restaurant, and then an adult bookstore, before finally becoming The Original Carrabba's in 1986. As customer traffic increased, Carrabba continued to add on, eventually growing the restaurant to 11,000 square feet.

In 2008, Hurricane Ike caused roof damage to the structure, which three years later led Carrabba to take a leap of faith in the form of breaking ground on a new restaurant just several feet from the original location, which became a parking lot. "The new building was constructed immediately adjacent to the old restaurant in order to keep it in operation during this challenging process," explains Michael Dreef, AIA, vice president of Eubanks Group Architects.

The Original Carrabba's and a nearby sister restaurant, Rosie Carrabba's, have been family businesses featuring a consistent menu of family recipes since their inception. Upon walking into The Original Carrabba's, guests find a warm, welcoming atmosphere. They can sit in the main dining room and at expo kitchen counters where they are within a few feet of culinary staff preparing the restaurant's specialties. The bar also offers seating.

"We're upbeat, not serious and stuffy," Carrabba says. "The restaurant is fun to be in. We attract many customers from the local neighborhoods and know many of them by name."

"Our objective was to maintain the overall dining experience for the patrons who have been enjoying Carrabba's for more than 26 years, while giving the new building a fresh and brighter look," Dreef says. "Similar to the original layout, the new design features an open kitchen with a dining counter — a popular element with Carrabba's regulars. And now the prominently positioned pizza oven is a focal point of the design and experience."

Click to see the
floorplanThe new restaurant maintains the same general layout and relationship of the kitchen, bar and dining rooms as the original location. "At the same time we raised the ceilings slightly, incorporated numerous salvaged architectural antiques, replaced all tables and chairs, and provided new artwork and artifacts appropriate for the new restaurant," Dreef says. Along with a warm, neutral palette, Dreef's team used a stained wood wainscot to recreate the warmth that made the old Carrabba's was so popular.

For nostalgia the design team reused some of the light fixtures and artwork from the original building such as snapshots of family matriarchs and photographs of Carrabba's uncle making sausage and children playing in gardens where the family grew rare herbs found in northern Italy. "A few of the old photos were blown up on large canvases and used throughout the main dining area," says Camille Blanchet, interior designer with Eubanks Group Architects. "For example, the wedding portrait of Johnny Carrabba's parents resides behind the hostess station." In addition, new and old authentic Italian ceramic plates grace the walls of the main dining and loggia areas, and 14 custom shadow boxes with hidden lights cast a soft, dramatic glow from underneath light arrangements of old wine and champagne tools and paraphernalia.

Selecting finishes that produce a cozy atmosphere without appearing institutional, designers specified porcelain tile floors, stained wood wainscots and granite base boards in certain areas. Hospitality-grade carpet tiles can be switched out as needed without replacing the entire floor.

A variety of ceiling surfaces achieve an acoustical balance appropriate for a restaurant and help contribute to the space's overall ambiance. "We specified a combination of drywall beams and acoustical ceiling tiles in the main dining room to avoid a large expanse of flat ceiling," Dreef says. "This treatment, along with the pendant light fixtures that we reused from the old restaurant, provides movement in the ceiling while addressing the important issue of
acoustical balance."

Lighting throughout the restaurant factored into the design. "The city of Houston has strict rules with respect to the Energy Conservation Code that was adopted in 2008, which was a factor in lighting design," Dreef says. In order to meet the requirements, designers specified a variety of fixtures and lamps including fluorescent, incandescent, LED and even natural gas lanterns. Low-voltage incandescent
accent lights highlight the artwork.

"It is important for restaurant lighting to be warm in order for the food to look appetizing, which is often difficult to achieve with LED and fluorescent lighting. So we had to rely on filters and dimming where possible," Dreef says. "Another consideration was to keep the lighting flexible since the tables are often shifted around to accommodate larger groups."

The automated dimming system is another feature that keeps the light levels consistent from day to day. "We also incorporated automated solar shades to respond to the effects of the sun, especially on the west side of the building which has lots of windows," Dreef says.

The private dining rooms feature vaulted ceilings with draped fabric that add a splash of color and complement the rest of the décor. In other parts of the restaurant, designers varied ceiling shapes and heights to provide visual interest.

The restaurant can now accommodate private dining functions, which Dreef says was not practical in the past. "The former loggia dining rooms were expanded and are now better integrated with the main dining room," he says. "We also designed a new wine dining room that can be reserved for private functions."

The ambiance contributes to notable customer loyalty, says Carrabba. He adds that low staff turnover and consistency of the dining experience also help generate repeat business. "Staff, many of whom have been with me for many years, know the customers and give very personalized hospitality," Carrabba says. "Customers know the quality of food and that the customer experience will be consistent. For example, customers know they can come in on any night and get items they love like chicken soup made from my grandmother's recipe. They can also come in on specific days and get a particular item such as osso buco. We change the menu enough to add variety, but always keep favorites like the braised short ribs and stuffed artichokes because that's why they come here again and again."

The overall design of the restaurant, from delivery to service to cleanup, follows a circular flow pattern. "We don't want staff to retrace their steps, and we wanted to eliminate possibilities of cross-contamination," says Tom Cook of C&T Design and Equipment Co., which provided design services for the new kitchen.

In the back of the house, staff receive food deliveries six days a week at the loading dock and place food items in two walk-in coolers and one two-door freezer. The walk-in cooler contains a blast chiller for quickly cooling down soups and sauces.

Other key features are windows that bring natural light into the kitchens and the raised ceiling, which gives more space. Additional lighting brightens the workspaces.

In the prep area, staff make soups, salads, sauces and salad dressings using a food processor, can opener, two tilt kettles and a four-burner range. The finished products are placed in containers and distributed to various prep stations as needed.