A complete renovation creating main and exposition kitchens and seven dining rooms in the Royal Sonesta New Orleans brings together the inspiration and talent of two renowned chefs who are reinterpreting classic Cajun and Creole cuisine. 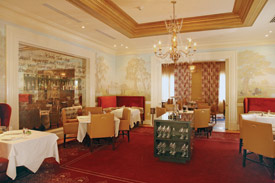 The Storyville Parlor features an 1830s chandelier, cut-glass pendants and hand-painted murals by Grahame Menage that depict scenes of Louisiana’s rich culinary and cultural past.New Orleans culture is renowned for its devotion to tradition. This Louisiana city, which sits along the Mississippi River, is also known for its innovative restaurants and acclaimed chefs. In June, the French Quarter welcomed Restaurant R'evolution, a 180-seat establishment in the Royal Sonesta New Orleans hotel on Bienville Street.

Featuring a reinterpretation of classic Cajun and Creole cuisine, the new establishment is the inspiration and first joint venture of Louisiana chef and prominent business

entrepreneur John Folse and Chicago-based celebrity chef Rick Tramonto. The resumes of these two renowned chefs feature no shortage of extraordinary accomplishments and awards. They decided to capitalize on their close friendship and multifaceted talents to open a restaurant unlike any other in the city or the world.

The chefs first met in 2002 when Tramonto invited Folse to serve as a guest chef at Tramonto's award-winning four-star Chicago restaurant, Tru. In August 2005, following Hurricane Katrina, Folse recalls that Tramonto was the first chef to call him and ask what he could do to help. Tramonto flew to New Orleans and the pair worked 16-hour days in the sweltering temperatures at churches and on the street, feeding people in need. In 2010, Folse and Tramonto formed Home on the Range: Folse Tramonto Restaurant Development LLC.