There aren’t many places in the United States with a stronger pub culture than Wisconsin. If you’re able to launch a successful beer-and-burger pub chain there, you’re probably onto something. Mr. Brews Taphouse, then, is a clear success story.

The 16-unit concept, which opened its first location in 2013 in Weston, Wis., is the brainchild of Steve Day, a first-time restaurateur with an entrepreneurial background. Though today’s tagline didn’t exist at that time, it sums up core elements of Mr. Brews from the start: “Where the perfect burger meets your new favorite beer.”

Today, that means 50-plus beers on tap, ranging from standards offered by the biggest American breweries to hyperlocal microbrews. Guests can enjoy these drinks along with eight core burgers that they can customize in literally thousands of ways thanks to different cheeses, sauces, premium toppings and patty types.

Mr. Brews offers more than what’s on the menu, though. The restaurant’s warm and welcoming pub atmosphere appeals to a variety of customer segments, from those stopping in for a drink after work to families gathering for a meal.

“It’s your neighborhood place where friends and family can gather and relax — have a good time,” says Carrie Martin, vice president of operations services.

By 2019, the time had come to shift away from being an entrepreneurial venture into something more systematic. Seeking industry expertise, Mr. Brews brought in a new operations team, including Martin and Mark Leach, chief operating officer. Since that time, the chain has worked to develop a more robust franchise support system and nail down the core elements of the concept, including its design and graphic identity. 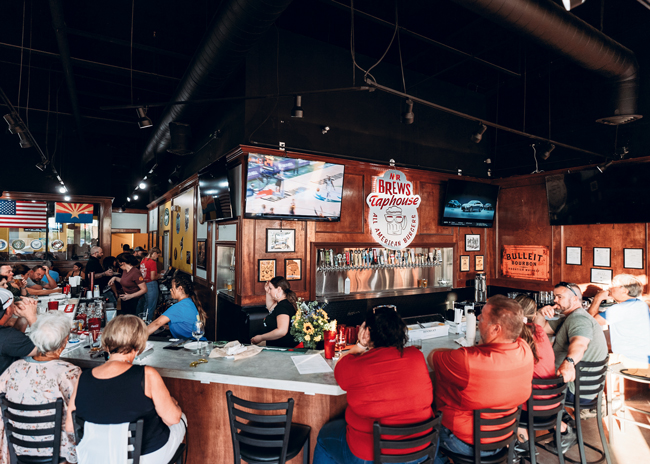 Describing the core design elements of a Mr. Brews can be difficult. Out of the chain’s 16 locations, 15 are franchised, and franchisees have historically been given wide leeway in the restaurant design. One franchisee, in fact, made his own tables using beer barrels as bases.

The restaurants do feature some universal (or near-universal) elements, though. As a pub concept, locations feature warm, dark woods alongside impressive tap displays and plenty of brewery swag, especially logos and signs that hang from the walls.

The restaurants also feature games and activities ranging from shuffleboard to darts to cornhole. Stores even feature a Kids Corner with games like Connect 4, Battleship and Uno. “It’s so much fun to watch the kids running there, grab their game, and sit with mom and dad,” says Martin. “Sometimes they’re all playing; sometimes the kids are playing by themselves while their parents are watching the game.”

Looking ahead, Mr. Brews’ stores will likely feature more universal elements. The company’s new operations team developed a manual for pub openings that includes guidelines on everything from kitchen equipment to food specs to furnishings to forks.

Key elements will include the aforementioned darker woods, as well as an electronic menu board system for displaying the beer selection, which also allows guests to view offerings on their phone and filter choices by alcohol by volume, beer type and more.

According to Martin, while new openings will follow this manual, the operations team also built in some wiggle room. “As we move forward, some of the franchisees will say they want to look at this booth or this color,” she says. “We start with the foundation, and then we agree on what those freedoms will be based on the footprint, on the community — but the foundation is there.”

The chain’s Melbourne, Fla., location serves as a good model for this approach, Martin says. The restaurant resides roughly 15 minutes from the beach and 40 minutes from the Kennedy Space Center. Many of the darker furnishings and design elements simply didn’t work in that location, so Mr. Brews and the franchisee researched alternatives. The company even created a visual connection with the nearby space center by embedding LED lights in the bar top in the shape of constellations. 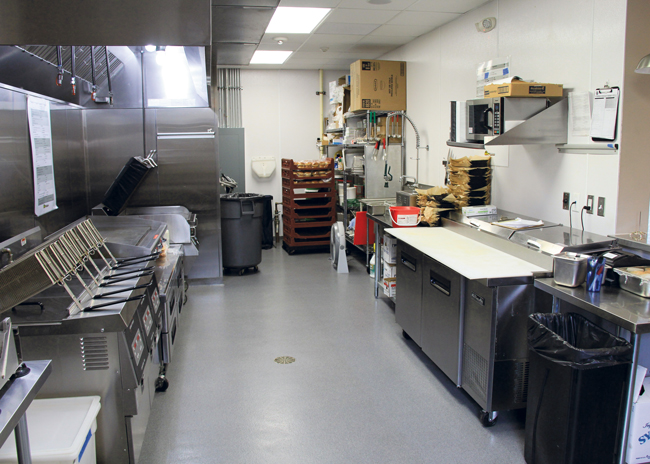 The chain’s hot line, on the left, consists of three main stations: a clamshell grill, a flattop and fryers.

In addition to the inherent appeal of burgers, beer and community, Mr. Brews succeeds due to simplicity in its menu and operations.

As mentioned, Mr. Brews has a highly customizable menu, but it includes only a handful of core offerings: eight different burgers; bar staples like wings, Bavarian pretzels and onion rings; and house specialties, such as a chicken sandwich and chicken tenders.

This simple menu, Martin notes, helped ease the transition to off-premises sales during the pandemic. At a time when many operators were having to eliminate menu items, Mr. Brews didn’t have much to cut.

Naturally, Mr. Brews’ simple menu means the concept’s kitchen is simple as well. The kitchen includes small areas for food prep and dishwashing. The kitchen’s focused food production space consists of a hot line against the back wall and an assembly area along the front, facing an expo window.

The hot line starts with the chain’s clamshell grill station. Depending on store volume, a location can have one or two grills, each with two platens that raise and lower onto proteins. With this unit, culinary staff can cook basically every sandwich base the chain serves, from hamburger patties to chicken breasts to plant-based burgers. With the two-sided cooking, everything is done in 90 seconds to 2 minutes, with the units’ programmable features handling the exact grill temperature and cooking time. It is, Martin says, a “set it and forget it” situation that cuts labor costs and simplifies training and operations.

Following the clamshell station is a small work surface and a traditional flattop grill that sits on a lowboy with refrigerated drawers. The drawers hold the proteins for the clamshell as well as cheeses for various sandwiches. This setup, says Martin, lets kitchen staff execute three quarters of a typical sandwich build on the hot line before passing the dish to the cold section. 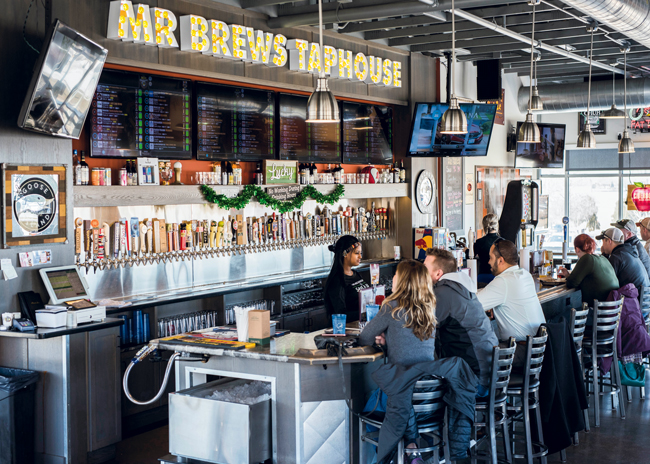 While some older pubs use hanging chalkboard sections, going forward, Mr. Brews’ beer selection will be displayed on an electronic system that syncs with guests’ phones.“If the protein needs cheese melted on it for whatever build we are doing, [line cooks] transfer the protein to the flattop,” Martin says. “You reach down to the lowboy to grab whatever cheese is your topping and heat it up on that flattop. You pretty much do your build right there. That’s also where you get your buns a toasty brown.”

Following the flattop grill is the fry station. Here, staffers cook onion rings, french fries, cheese curds and potato chips that are freshly cut in-house. Similar to the clamshell, the recipes for all these items are programmed into the fryers, allowing staff to cook with just the push of a few buttons.

The fry station has few additional pieces of equipment on top of the fryers themselves. First is a potato slicer for making the house-made chips, as well as another slicer in some stores for cutting french fries. The space also has a freezer, either upright or undercounter, depending on the store’s footprint, where items like cheese curds are held. Finally, the station includes a space for tossing fries and chips with seasonings like garlic Parmesan, ranch and barbecue — all part of the chain’s approach to creating variety with easy-to-execute additions and swaps.

The fry station marks the end of Mr. Brews’ hot line. The cold line, a 180-degree turn away, is even simpler than the hot. The main piece of equipment here is a single large cold table where staffers add sandwich toppings like lettuce, tomato, ketchup and more. Below the wells holding these ingredients are backups of each.

The cold line also has a small countertop warmer that holds beer cheese that pairs with the Bavarian pretzel appetizer, along with a separate warm cheese sauce. Sitting above the cold table is a small microwave that staff use to heat items on the kids menu such as macaroni and cheese and a peanut butter dessert sauce.

With such a tight equipment package, the kitchen can run with just one or two staff members during slow times.

The simplicity of Mr. Brews’ operations is further enhanced by the new franchise support elements that leadership has rolled out. At every station, for example, posted sheets outline the build of specific menu items made there. “All you have to do is put your eye at one place, and it will say this is how long you fry it for, even though it is preset, or what goes on this and what goes on that. If you, for any reason, forgot what goes on the Kentucky Bourbon Classic [burger], all you have to do is take a quick glance. It makes the brain work smarter, not harder,” Martin says.

These sheets represent just one of the resources the new operations team developed. There are also prep sheets, training manuals and food spec guides that include contacts and product numbers.

Such changes, Martin acknowledges, will take some time to roll out and gain full acceptance with an existing franchise base. Instead of immediately requiring the adoption of these new processes across the board, the chain has been working to bring franchisees up to speed on what’s available and then lets them discover the benefits of these tools on their own.

Word of these benefits is beginning to spread among franchisees. In fact, one legacy partner recently came to a new store opening to view the process and tools in action and came away impressed, Martin says. That sort of buy-in helps build credibility with every member of a franchise system, she adds.

Going forward, the hope is that the company’s new franchisees will embrace these resources from the beginning. After all, says Martin, “providing that foundation, that model, that framework is what they are buying a franchise for.”

In terms of franchise partners, the chain likes to work with experienced operators, but a franchisee who hires a skilled operator to run the restaurant is an acceptable model as well. The chain is similarly flexible on locations. Geographically, the bulk of Mr. Brews are in the company’s home state of Wisconsin. The chain also has restaurants sprinkled around the U.S., including in Arizona, Florida, Kansas, Kentucky and Texas. Finding partnerships, then, comes down to a hard-to-define mix of geography, operator and real estate.

A good location could be in a suburb, a college town or somewhere else, but it must be in a place where people want to gather in a “pubby” space, says Martin. After all, this concept, which started as a beer-and-burgers spot in Wisconsin and developed into a chain, hopes to thrive by staying true to that pub vision.

In the end, says Martin, no matter where the chain opens, “I want to be in a neighborhood with guests who want to hang out and drink beer and eat great burgers.” 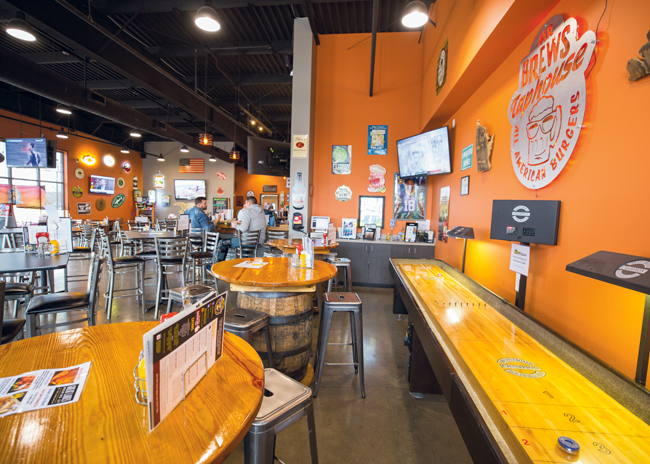 Activities like shuffleboard play a big role in the Mr. Brews experience. The barrel tables were made by this location’s franchisee, reflecting the flexibility the chain has historically allowed in its design.