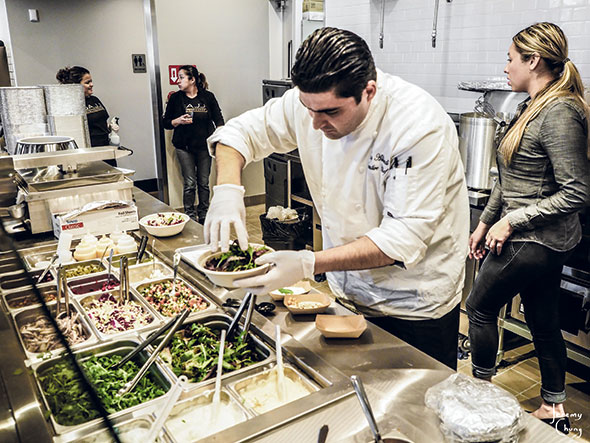 SAJJ Mediterranean and The Network Effect

“Complete disaster” isn’t how most founders describe the early days of their companies. Zaid Ayoub, co-founder and CEO of SAJJ Mediterranean, doesn’t pull any punches, though.

When the fast-casual operation based in the San Francisco area launched in 2014, Ayoub and his partners pushed a lot of money to the center of the table, opening three restaurants in a matter of months. 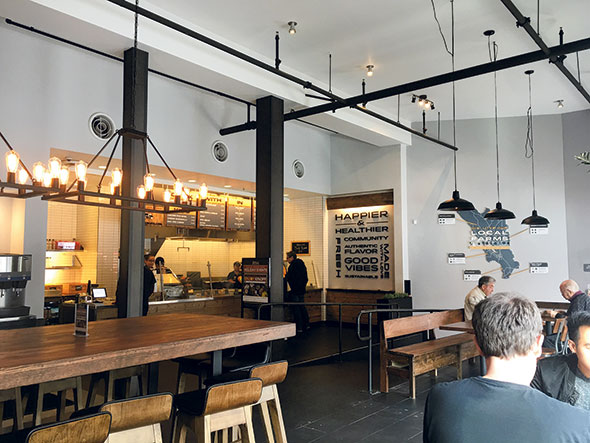 Some elements of the SAJJ interior change with each building, but every store features a map highlighting the location of different local food purveyors.

So SAJJ pulled back. The company closed two of its three stores, and leadership began reevaluating everything. Ayoub went from a founder/quasi-leader to full-time CEO. The company brought in a new executive chef and chief operations officer to perfect the recipes, streamline the kitchen, and nail down processes and procedures. Perhaps most important, SAJJ rethought its strategy based on how it saw guests using its restaurants going forward.

The result: Today, SAJJ serves its wraps, bowls and pitas in 13 restaurants, all in California and all company owned. It is on track to hit 20 locations by the end of this year. What’s more, it has developed a go-to-market strategy that makes it possible for the chain to quickly scale in new markets — a goal the company has set for the not-too-distant future.

During its reevaluation period, SAJJ’s leadership took to heart the idea that brick-and-mortar stores should only be part of the company’s strategy. Part of this was driven by the chain’s location. Plenty of
tech companies in
San Francisco, particularly startups, feed their employees lunch and dinner. And with its base in a technophilic area, online ordering plays a big role in how customers connect with restaurants.

As a result, the chain leaned into catering, online ordering and even food trucks. This, says Ayoub, has created what he calls a “network effect” for his company, where consumers view the brand as widely available and easy to work with. On the digital front, this manifests in online orders, as well as robust catering operations that can handle big jobs on short notice.

“You can order catering for as many people as you want within a 60-mile radius of the Bay Area,” Ayoub says. “We get a bunch of orders for same-day delivery. It could be for 200 people. As long as we have a four-hour window, we can execute it because we have a good footprint in the Bay Area. We route the order to the closest location. If there’s a problem, we have backups.”

To make this work operationally, SAJJ made significant changes to how it produces its food. First, the chain created its own commissary, which makes and distributes items like sauces and spice mixes to SAJJ locations. A third-party partner makes and delivers specific items to the stores, such as hummus, falafel batter (sans seasoning) and shawarma (bagged and marinated). Having so much prep work done in bulk off-site makes it easier for the chain to quickly produce large quantities of food for big orders.

That’s not to say that all of SAJJ’s food is prepped off-site. At each location, the chain slices and dices its own produce, including tomatoes, cucumbers, pickled cucumbers and cauliflower. This work takes place in the back of the house with an assist from a food processor. Staff also finish the falafel batter and hummus in stores, adding seasonings to the bases.

When it comes to cooking this prepped food, SAJJ stays flexible, perhaps unusually so, with its kitchen design. Doing so helps the chain find good spaces in the Bay Area. In fact, stores can opt to place the hot side production equipment either in the back or front of the house, depending on the space’s footprint. 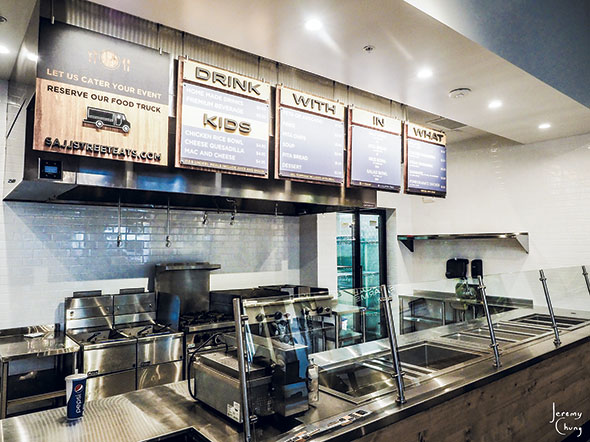 The restaurant’s assembly line sits in the front of the house, while the location of the hot line can be in the front or the back, depending on the footprint of the space.

Ideally, SAJJ prefers the hot line to be up front, in full view of the customers. The line sits against a wall and starts with the fry station. SAJJ utilizes two fryers: one exclusively for falafel, the other for all other fried items, including french fries, pita chips and fried cauliflower. A small wood table that holds the uncooked falafel mixture accompanies the fryers. The table can sit on either side of the fryers, depending on what works best with the shape of the kitchen.

After the fryers come two flattop griddles. Staff cook primarily beef on the unit that measures 24 inches long and chicken on the 36-inch-long griddle. Those sizes were chosen very deliberately, says Loay Alhindi, executive chef. One of the primary items SAJJ relies on from its co-packer is meat marinated to Alhindi’s specifications and delivered in 7-pound bags. Every 12 linear inches of griddle space can handle one bag. With this design, then, the chain can cook two bags of beef shawarma and three bags of chicken shawarma at a time.

“It’s designed for operations performance. It’s not like you have to scoop and figure out how much is in a bucket. There’s none of that. You just grab two bags and put them on,” Ayoub says.

This approach, Ayoub adds, makes it easier for SAJJ to execute catering orders since team members arriving in the morning can quickly and easily calculate how much meat to cook for each order.

SAJJ does not store the bags of meat in refrigeration below the griddles, though. Since the proteins arrive at the restaurants in such large batches, there’s no need to have them right at the line cook’s fingertips. Instead, SAJJ holds these bags in the restaurant’s walk-in cooler in the back of the house, and staff simply retrieve them as necessary.

Even with this setup, when fine-tuning SAJJ’s kitchen, Alhindi added refrigeration below the flattops, which previously sat on worktables. These units primarily hold items for the fryer, such as extra falafel batter, as well as prepped cauliflower.

When space permits, Alhindi includes a 12- to 24-inch chargrill for chicken kabobs in what is purely a play for quality. Not only do the grill marks make the kabobs look better, he says, but “when the chicken has the taste of fire, it’s different; it’s more authentic.”

Following the chargrill is a four-burner range top staff use to make soups. In the oven below, team members finish kabobs and warm other items as necessary.

While the oven marks the end of the hot line, the cold line, where team members assemble orders, sits just 180 degrees away.

SAJJ utilizes the tried-and-true co-creation method, with customers walking down the line, pointing out what they want in their wrap, bowl or pita.

The line starts with the actual saj, a metal dome heated from underneath that resembles a fire-heated, upside-down wok and on which culinary staff cook flatbreads. SAJJ Mediterranean uses an electric-powered unit that doesn’t require a hood.

Following the saj is a steam table for hot items like rice and proteins. A cold table for veggies, tomatoes and pickled cucumbers, as well as sauces including hummus and tzatziki, comes next. A panini press marks the last piece of equipment on the cold line. “By the time you build a wrap with the hot and cold items, it tends to be on the colder side, so we heat it up,” says Ayoub.

Notably, this isn’t the only assembly line in the typical SAJJ restaurant. With online orders representing a significant portion of the chain’s business, SAJJ builds a second line just for these orders. This line allows the chain to better serve online customers, while in-store guests don’t have their time in line extended because of an online order.

While dine-in sales account for only about 30% of SAJJ’s sales, the chain wants to offer these customers a relaxed, comfortable space where they feel free to enjoy their food and stay as long as they like.

According to Ayoub, a principle of SAJJ’s design is to honor the spaces where it builds its restaurants. If the company opens in an older building, it leaves the old tile flooring and brick walls exposed. In newer spaces, it highlights the modern design aesthetic through lighting and other design elements.

Elements such as the furnishings and wall decor communicate the chain’s branding and identity. Furnishings include high- and low-top tables. A featured high-top community table with a showpiece light fixture overhead serves as a focal point, and its position supports wayfinding. Wall decor includes a large SAJJ logo near an upholstered banquette, as well as a map showing locations of the bakery and produce suppliers for each particular store. SAJJ, says Ayoub, plans to keep this design as it expands through this year and beyond.

Looking ahead, the company expects to reach 20 locations by the end of the year, sticking with its focus on California. After this year, says Ayoub, the company will look to expand to nearby states, looking in particular for markets with demographics similar to the Bay Area.

Wherever the next market takes them, the chain will stick with the game plan that’s working in California: brick-and-mortar stores, food trucks, catering, online ordering and third-party delivery. SAJJ’s commissary/co-packing strategy should make expanding in new markets easier, Ayoub says.

Even with so many outlets for its food, SAJJ continues to look at more ways to get its offering in guests’ hands (and stomachs). The company is exploring the use of ghost kitchens. These, Ayoub believes, would work best in markets where customers may know of SAJJ but where the chain may lack a physical presence. This could range from far-flung suburban areas to some urban markets.

The company is also developing a SAJJ Go concept. Under this plan, the chain will set up in the lobby or cafeteria of large office buildings during the lunch rush. Staff will cook food at the restaurant and bring it to the building, according to Alhindi, essentially functioning as a catering operation. If the infrastructure is available, he says, staff could also cook in the building itself. This remains a work in progress as the chain strives to figure out the ideal footprint and menu for SAJJ Go.

This new development, of course, keeps with the approach that has taken SAJJ from disaster to success: Get food to customers any way they can.

“At the end of the day, we want to be able to provide the best food — healthy, fresh, customizable — to our guests, any way they want it,” says Ayoub. “At this stage, there’s a need to do this because if you don’t, you’re really going to be left behind.”

SAJJ Mediterranean at a Glance