A new fast-casual concept bakes up signature or customized artisanal, Neapolitan-style pizzas in a flash. Its franchise-savvy founders expect it to spread like wildfire. 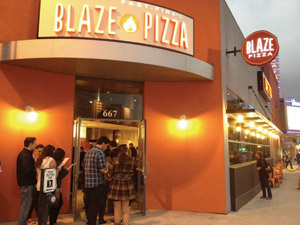 Elise and Rick Wetzel chalk up the inspiration for their hot new concept, Blaze Pizza, to an "aha moment" that hit at lunch one day early last year. Short on time and craving good pizza, the pair searched the neighborhood for a place that could satisfy both their need for speed and their sophisticated taste buds. They struck out, ending up instead at a Chipotle down the street. That's when lightning struck.

"We looked around and thought, 'Why can't you serve pizza like this?' says Elise, president of the two-unit-and-growing concept. "We thought the format would be perfect for artisanal pizzas. We knew that they cook very quickly; it just doesn't feel like it when you're a guest at a good pizza place because they take your order, bring your drinks and it's a much longer process. We thought it'd be great to deliver the kind of pizza you get in an artisanal restaurant but fast, and we knew we could do it with a Chipotle-style operation. It's a great format and it's very in line with consumer trends — particularly with Millennials who want quality ingredients, transparency and the ability to customize."

By the end of lunch, their vision for a fast-casual artisanal pizza chain had begun to crystalize. By August, they'd opened their first Blaze Pizza unit in Irvine, Calif. By October, the second unit was up and running with lines out the door in Pasadena, Calif. By the end of last year, Blaze had announced key corporate staff additions, including Carolyne Canady as vice president of franchise sales and Rod Lucio as vice president of real estate, as well as its first franchise agreement for three stores in southern California. Rights had been secured to sell franchises in 35 states, according to Elise, who says the company expects to have 15 units in operation by the end of this year.

Beyond that, the team is geared for rapid expansion and has the experience to make it happen. In Elise's words, "It's not our first rodeo with franchising." If the Wetzel name sounds familiar, it's because Rick and partner Bill Phelps founded the Wetzel's Pretzels chain 15 years ago, which today operates more than 275 units in the United States and abroad. Canady and Lucio bring additional fire power. Canady was most recently director of franchise sales at Buffalo Wild Wings Inc., where she created more than 280 new franchise agreements during her 5-year tenure. A 20-year corporate real estate veteran, Lucio served as manager of West Coast development for Chipotle and real estate manager at Panda Restaurant Group before signing on with Blaze Pizza last November. The company also boasts a cast of high-profile investors, including former California First Lady Maria Shriver, movie producer John Davis and Boston Red Sox co-owner Tom Werner.

Its ace in the hole, however, is Chef Bradford Kent, according to Elise. Nicknamed "The Pizza Whisperer," he was brought on soon after the couple got serious about launching Blaze and set out to develop its culinary points of difference.

"We knew very quickly that if we were going to build a concept that delivered the culinary standard that we wanted we needed to get a chef on board," she says. "I Googled 'pizza consultant Los Angeles' and Brad's profile came up. It was the luckiest Google search of all time."

Kent, who slightly more than two years ago opened the critically acclaimed Olio Pizzeria & Café in West Hollywood, has a diverse resume in the food industry. Prior to opening Olio, he'd spent years in fine dining and catering kitchens as well as in research and development for large food manufacturers such as ConAgra Foods and Hunts. He went to culinary school and also studied food science and marketing. Over the years, he had developed a self-described obsession with perfecting Neapolitan-style wood-fired pizza — his specialty at Olio, which he continues to operate, and now as executive chef at Blaze. It's a concept he says is strikingly similar to one he'd been formulating for more than three years but never had the time or franchising expertise to get off the ground.

Initial product development for Blaze took place in a mobile wood-burning oven parked on the street on the side of the road near Olio. Kent uses it for on-site catering and sales at events such as the local farmers market. "The oven that the Wetzels had decided to use was the same as the mobile one that I had purchased," says Kent, who notes that the chain's culinary concept was a culmination of his own and the Wetzels' research and ideas.

While Blaze's fast-casual format offers a selection of toppings from which guests can build their own pizzas as they move through the line, the menu also features a selection of side salads and eight signature pies developed by Kent to showcase the chain's artisan sensibilities and range of ingredients. These signatures include BBQ Chkn [sic] with grilled chicken, mozzarella, red onion, pepperoncini, crumbled gorgonzola and barbecue sauce drizzle; Green Stripe, featuring pesto drizzle over grilled chicken, red peppers, chopped garlic, mozzarella and arugula; Art Lover, with artichokes, mozzarella, ricotta, chopped garlic and red sauce dollops; and Meat Eater, with pepperoni, crumbled meatballs, red onion, mozzarella and red sauce.

"The majority of toppings are similar to what you'd expect to find at pizzerias across the country," Kent says. "Because we're targeting national expansion, we tried to be kind of mainstream in that regard, but also to put a little twist on each one to make them a little lighter, fresher and more appropriate to our artisan-pizza business model." 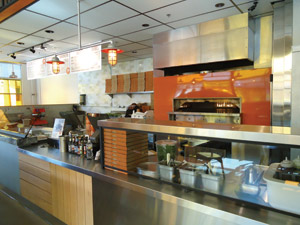 Blaze Pizza’s service style emulates Chipotle by allowing customers to pick the toppings for their pies while watching staff assemble their order. The orange-colored open hearth oven is visible to customers anywhere in the front of the house.While the initial selection of toppings from which guests could choose came largely from those used on the signature pies, to maximize cross-utilization and minimize waste, Kent says the selection is being expanded. "We're now at about 23 toppings and are planning to add 9 more to make it more fun for our customer base. A lot of guests do choose to build their own pizzas, so we're adding to the selection to keep it interesting. We're adding both common and unusual toppings, such as hand-torn oyster mushrooms, maybe some crumbled goat cheese, spicy chicken and maybe an herb-infused oil to use on white pizzas. That's the beautiful thing about the people that I work with: They're open to keeping it fun, interesting and engaging to keep up with trends and consumer demand. It keeps it fun for me as a chef, as well."

All pizzas at Blaze are individually sized at slightly more than 11 inches and all feature thin crusts — approximately 2 to 4 millimeters thick in the center and 9 millimeters tall at the edges, according to Kent. They're made from slowly fermented dough that's prepared fresh in-house at each unit.

"That's a concept-critical process," Kent says. "Each kitchen has a dough station manned by one person who starts preparing dough in the morning for either that night or the next day. Our dough requires a good long, slow fermentation to develop its signature flavor and texture. Each batch of dough yields a little over 100 pizzas."

At both California stores, signature pizzas are priced at $6.85 each, as is the build-your-own option, for which guests can choose any combination of three meats and cheeses plus all of the vegetables they want. "If you want more than that, it's a buck a piece after that, but most of our guests get everything they want for that $6.85," Elise notes. Side salads sell for $3.50 each.

The back-of-the-house at Blaze comprises 800 to 900 square feet of a typical unit's total 1,800- to 2,200-square-foot space. In addition to the dough station, it includes the make line, a dish washing station, space for prepping fresh produce, and dry and refrigerated storage "It's similar to a Chipotle kitchen in size," Kent says, "but it's different in that they have a back kitchen where they just reheat menu items that are prepared somewhere else. We don't have that because we're making everything fresh in the restaurant. Also, our storage space is small because we get deliveries six days a week."

The star of the kitchen and the concept in general is its blazing open-hearth oven. It's the only piece of cooking equipment used at Blaze and it handles everything from baking the pizzas to roasting chicken, Italian sausage, meatballs and even the marshmallows used in the restaurant's single dessert choice, s'more pie. "Having the oven as our only piece of cooking equipment lets us keep the kitchen smaller. That one piece does it all and we only need one hood, as well," says Kent.