American Griddles: The True Workhorses at The Hoppy Gnome

With some restaurants, speed of service can be especially challenging due to lack of back of house space. 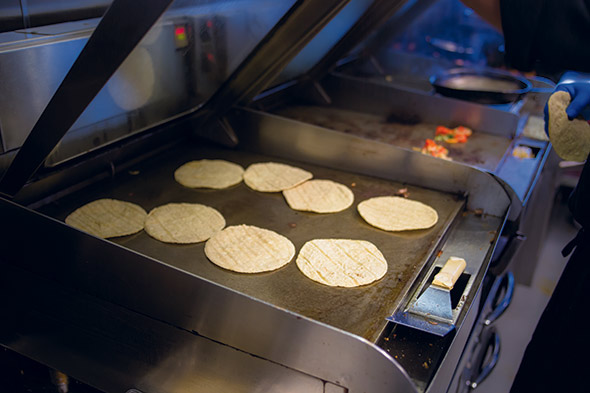 The time to prepare tortillas was reduced by over 75% when The Hoppy Gnome introduced the American Griddle.

This was the case for The Hoppy Gnome, which opened in 2015 to fill a niche focused around the booming craft beer and taco segments. The 300-plus seat restaurant had its kitchen space reduced to only 400 square feet in order to maximize seating up front.

Although it’s not unusual in today’s restaurants to minimize kitchen space, it can pose a challenge with high volume operations that depend on quick turns.

“On a good Saturday, we’ll bring in 1,000 people a day. It’s hard to describe, people don’t believe our volume, says executive chef Erick Millan. “We are a fast-paced restaurant, so the key is to bring food out fast and flip tables as quickly as possible. To do this, we look for equipment that saves us time.”

After six months of operation and guest feedback, the menu was expanded to include shareable small plates and a larger liquor selection. The downside was the kitchen seemed smaller than ever to accommodate the new menu items.

The restaurant’s long-term success hinged on the ability to turn out a larger menu quickly, while maintaining flavor and quality standards. Two Thermodyne slow cook-and-hold ovens were combined with two American Griddle steam griddles, which allowed the restaurant’s 10 protein types to be slow cooked ahead of time, cut and portioned, then prepackaged and finished off on the griddle.

With no conventional ovens or steamers, the operation relies on the American Griddle steam griddles, a small fryer, a six burner range, and the two Thermodyne slow cook and hold ovens.

With griddles that stay hot 24/7, the Hoppy Gnome doesn’t have to worry about the temperature or getting behind in their service.“Our griddles are busy,” says Millan. “When we used to use traditional flat tops, our first test was with tortillas, which took over a minute,” says Millan. “With American Griddles, it takes just 14 seconds to prepare.”

A big benefit of the American Griddle units is that these stay hot 24/7. “There is no recovery time at all. We can take the first batch out and put a new one right in,” says Millan.

In many cases, there is a time factor with griddles, which can have cold and hot spots. “American Griddles never get cold,” says Millan. “We can keep making tacos and not worry about the temperature or getting behind. Our speed of service is between five and seven minutes.”

Reliability issues can impact speed of service, as well. Fortunately, in the three years The Hoppy Gnome has been using the American Griddles, the units have never broken down. “Another benefit is the griddles are easy to clean and maintain,” says Millan.

The griddles are flexible for a variety of uses, yet this does not impact turnaround time. In fact, the restaurant depends on this equipment for its popular weekend brunch to prepare eggs and French toast. “I’d estimate 60 percent of our product is prepared with these griddles,” says Millan. “I’ve used all kinds of equipment, and this is the best.”