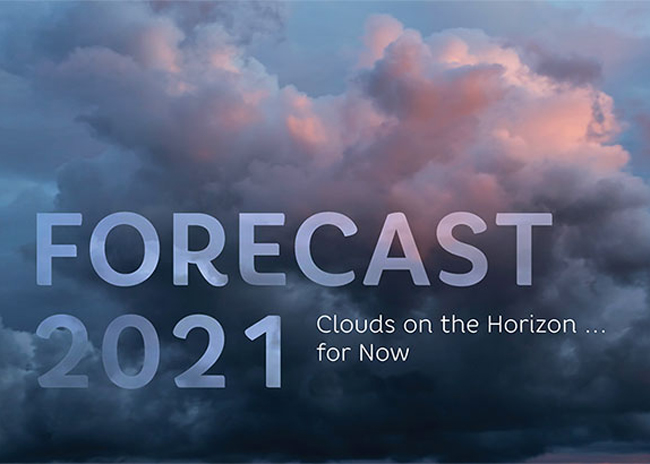 “The rest of this year is going to be predictably unpredictable.”

“The rest of this year is going to be predictably unpredictable,” says Darren Tristano, CEO of Foodservice Results. “We’ve adjusted and companies have pivoted. Limited-service restaurants will thrive through off-premises service. The full-service segment still has a few lessons to learn about off-premises dining, but they are doing a better job of making curbside and delivery a part of their business.”

Two factors continue to fuel the current uncertainty. “One is legislative. Will there be another round of funding that will help restaurants retain employees? That was a driver early on that allowed restaurants to keep people on staff and adjust their businesses,” says Warren Solochek, principal, Insights to Opportunities. “And until there’s some sort of vaccine that makes people feel safe, it’s going to make things difficult for operators. Younger people are more willing to go to restaurants, but the same can’t be said for older generations. So, there’s a big group of people not participating in restaurants.” 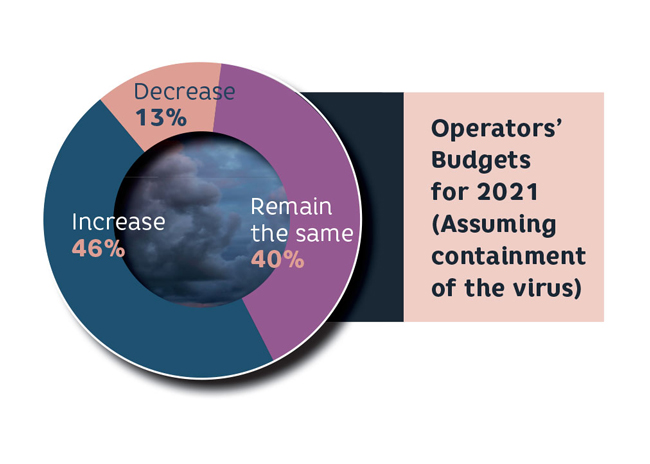 As a result, consumers overall will likely remain conservative with their spending through the end of this year and early into next year, Solochek says. “The findings are pretty consistent: Consumers want to use the services provided by restaurants, but they don’t want to go into restaurants. The good news is the demand is there. People have really gotten used to curbside and delivery.”

One might think the specter of an upcoming presidential election might contribute to the industry’s uncertainty but that does not seem to be the case. “The market has already adjusted for both outcomes. If Donald Trump wins, we’ve had a strong economy with him in office and we have the expectation that will continue. If Joe Biden is elected there won’t be much of a fall off, either,” Tristano says. “COVID is still the wild card. We have to get a vaccine so people feel it’s OK to go out to socialize before we see this thing turn around.” 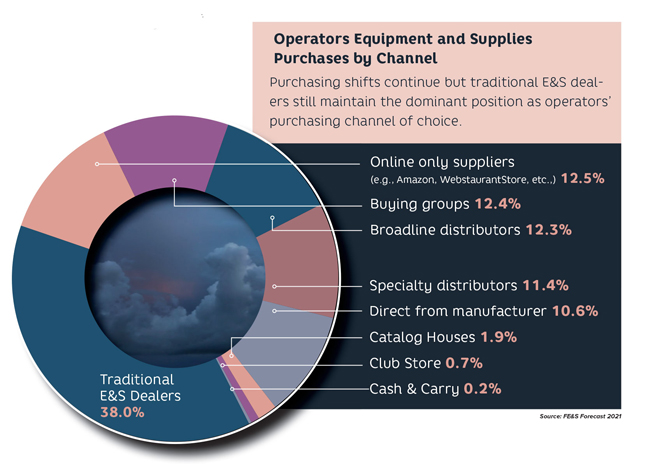 How does all of this translate into overall industry performance? Expect a tough first quarter in 2021, Tristano predicts. As for the second quarter, that period saw such steep sales declines in 2020 that next year’s numbers can’t help but go up during that reporting period. “The momentum will continue, and we will see double-digit growth — 20% to 25% year over year,” Tristano says.

Tristano was quick to temper that positive outlook with a dash of reality. “It will be strong growth over 2020 but likely a decline from 2019 numbers. It could take three to four years to get back to 2019 levels,” he adds.

Indeed, overall industry performance has long been a way for operators and members of the supply chain to benchmark the performance of their individual companies. Given the uneven and very regional nature of the economic recovery from the pandemic, a macro approach to benchmarking may no longer be prudent. “You have to look at performance on a micro level because looking at overall industry economic trends is not very valuable these days,” Solochek says. 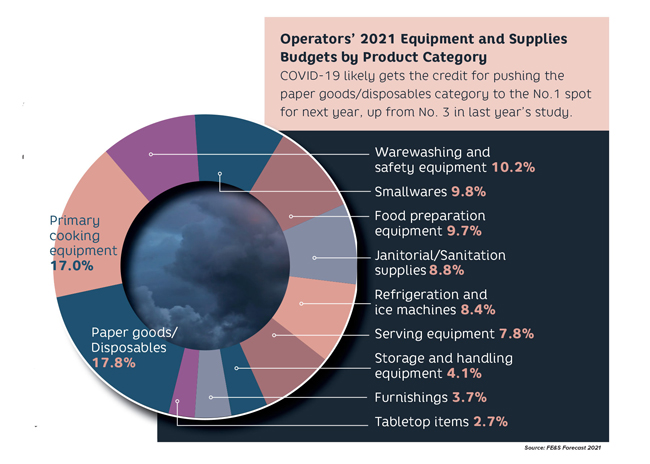 Tristano agrees, and adds, “We are always going to look at the bigger picture first but there are always going to be regions that outperform others. Local economies will vary significantly based on tourism, weather and more. Areas like New York are going to take a longer time to recover because of the issues they have had. In places like Arizona and Florida, people are more active year-round. Places that are accustomed to strong tourist driven economies are going to be hit hard. It won’t be business as usual for another 6 to 12 months.”

Another factor fueling a more local perspective is state and local governments continue to take individual approaches to everything related to reopening, from timing to capacity limits and more. Take, for example, Chicago and New York City. Both municipalities took similarly conservative approaches early in the lockdown, but the former has allowed restaurants to offer on-premises dining at 25% of capacity for months, while the latter is finally ready to allow the same to happen. And these approaches differ considerably to the approaches adopted by leaders in such states as Georgia, Texas and Arizona.

In other words, for 2021, the emphasis on local will apply to much more than the sourcing of ingredients. For that reason, restaurants will need to rely on the power of the pack as they strive to improve the health of their businesses. “You’ve seen some municipalities blocking streets for outdoor dining,” Solochek adds. “You saw competitors come together to get people out of their houses and to spend money. This is what retail did for years and years. The more stores you had on a street, the better chance you have to get people on the street to shop.”

When benchmarking their performance, operators typically do so against other restaurants from their segments. That approach may no longer be relevant in an operating environment that emphasizes local over anything else. “Now you look at it as QSR vs. everything else,” Solochek says. “The QSRs that had drive-thru windows and delivery are doing very well. Beyond that it’s survival of the fittest. It’s going to be pretty tough for planning. You have to look around to see what people are doing locally.”

To be successful in such an operating environment, restaurants will have to do two things. “The image they put forth to consumers has to be one that says it’s OK to use our restaurant from a safety and cleanliness perspective,” Solochek says. “That will show customers it’s OK to get food from their restaurants. Capacities are not going to increase. Here in the city of Chicago, capacities are at 25% right now and I don’t see it getting up to full capacity until mid-next year.”

The second factor focuses on ease of use. “The ordering and payment process has to be seamless. Getting the food from the kitchen to the consumer has to be easy and as contactless as possible,” Solochek says. “People have worked so hard to try to remain healthy. They don’t want to slip up and have it come from the restaurant. That would really damage a restaurant.”

A consistently inconsistent business environment continues to impact the operator mindset, too. “Operators are worried about bringing back too much staff. They don’t want to be too short because it impacts service and the ability to get food to the customers in a timely manner,” Solochek says. “But you don’t want to hire too many people in anticipation things might open up more because you are already struggling with money. It forces operators to think about flexibility. If they have to change and pivot, they need to be able to do it. 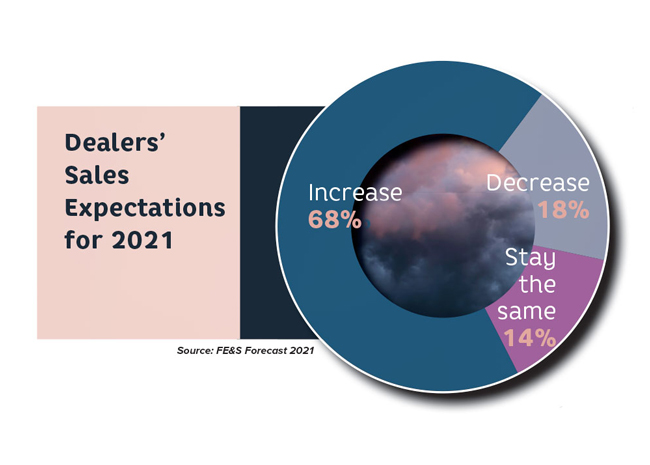 Pull Back or Be Adventurous?

These changing circumstances make planning more of a shorter-term exercise. “Where that has a big impact is on LTOs. How adventurous do I want to be on the menu because I’ve already pared it back a bit. Do I stick with my basic menu?” Solochek asks. “It was very painful for operators to pull back on their menus. There’s so much effort that goes into building menus or new items that it becomes difficult to decide which ones to pull back.”

One thing most industry observers seem to agree upon is that restaurants will continue to close in the coming months. “You will see continued closures through the end of the year,” Tristano says. “And in addition to the typical closures you would see after the holidays, you will see a few more due to companies not making it. We are getting closer to equilibrium in terms of supply and demand, which is good for restaurants. If you are the one closing restaurants, though, it’s not as good.”

Various restaurant chains continue to make mainly strategic cutbacks to their systems, which will likely continue, too. “I think it’s accurate to say that pruning stores that were underperforming prior to COVID and continue to underperform will continue to happen,” Tristano says. “But there’s a big difference between pruning the bottom 5% of your system vs. pruning 20% of your system.”

In recent years, private equity has taken a bigger ownership role in the restaurant industry. The current climate could prompt some companies to sell. “Some of those groups that got into full-service chains will get out,” Solochek says. “They are going to realize there’s not much more they can do and will want to get their money out. They will, instead, move into healthcare, tech and other industries.”

Tristano agrees some private equity firms will look to sell, he stresses the importance of looking at this on a brand by brand basis. “Performance evaluation will be lower, and I expect to see more activity. A lot of the big brands are going to be in the position to sell,” he says. It’s a seller’s market. “I don’t think they are trying to dump their investments. They are just trying to move on.”

While the chains will make headlines for closing their locations, the independents will bear the brunt of the burden of closures, Tristano adds. “We came into this year with an oversupply of restaurants,” he says. “If you go back to 2012, we were at a better equilibrium. But we’ve seen unit growth, mostly from the independents.”

The declining number of restaurants will raise the bar in other areas, including competition. “You will need to be a much better operator to stay open in the future,” Solochek says.

Given this unique set of circumstances, trying to define what success will look like in 2021 will vary greatly. “2021 will be a success if consumers feel better about COVID and vaccines are readily available,” Tristano says. “The year will also be a success if the economy continues to remain stable. When you think about the closures, the restaurants that remain will benefit because of additional sales share due to closures. If the economy drops, unemployment will remain higher. The longer consumers tighten their belts the longer it will take them to get back to spending.”

Indeed, the near-term industry forecast may call for a few more clouds, but sunnier days are on the horizon. 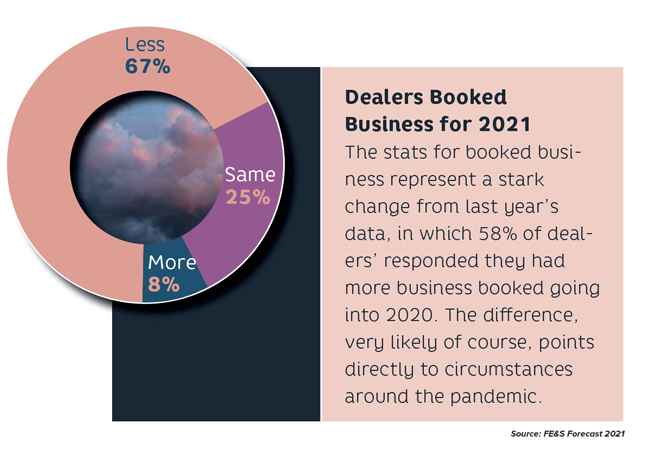 Chicago-based research firm Technomic projects restaurant industry sales will increase 21% in 2021. While a significant improvement over 2020, this still represents an 11% decrease from 2019 industry sales levels. Technomic ties industry prospects going forward directly to medical advances related to COVID-19, such as a vaccine or advanced therapies as well as underlying economic recovery.