A variety of factors, including social unrest, labor-related issues and a competitive real estate market, keep individual members of the restaurant community inching along toward incremental growth. 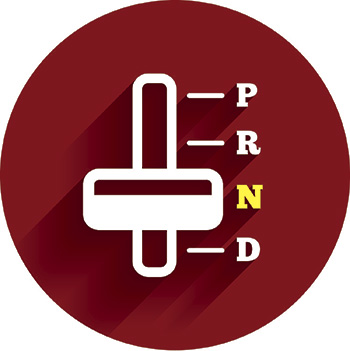 It’s a tough call based on the available evidence — but we think operators should brace for another year of modest growth in 2017. The data we’ve seen and the experts we’ve interviewed suggest that, on a macro level at least, the pace of sales and traffic next year is likely to mirror 2016. According to Jefferies restaurant analyst Andy Barish, it might even be worse: “Underlying trends are indicating slowing conditions as sales remain choppy into a more cautious consumer and increasing competition/discounting.”

Yet Stifel analyst Paul Westra predicted a recession in his July 26 Industry Note, which said that the second quarter’s 1.5 percent to 2 percent drop in restaurant spending “across all categories” signaled its start in early 2017. Politics, terrorism, social unrest and the economy were the causes. “Restaurants have historically led the market lower during the three- to six-month periods prior to the start of the prior three U.S. recessions,” he declared.

Still, consumers weren’t buying it — yet. A Conference Board official said Americans were “less negative about current business and labor market conditions, but only moderately more positive, suggesting no deterioration in economic conditions, but no strengthening either.” The Consumer Confidence Index read 97.3 in July, which is virtually
unchanged from June’s reading of 97.4. 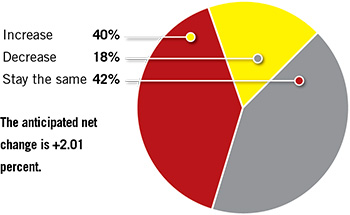 Operators’ Foodservice Equipment and Supplies Budget for 2017. Source: FE&S 2017 ForecastIndustry sales should remain positive as we head into a new year. Technomic Inc., for example, predicts this year’s total sales at restaurants and bars will climb a nominal 5.2 percent, to $573.1 billion. Accounting for menu price inflation —
2.6 percent through June, according to federal data — trims the projected growth rate in half.

Fast casual remains the segment du jour — or, more
accurately, of the decade — given its astonishing growth pace. Technomic president Darren Tristano pegs unit growth at 7 percent in 2016. Next year, he added, “I would expect races to A locations, and franchising will become a strong vehicle for many brands to get there with lower inherent risk and less capital needs.” 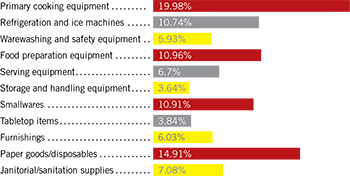 Operators’ 2017 Projected Equipment & Supplies Budget by Product Category. Source: FE&S 2017 ForecastEconomists expect low interest rates to endure into 2017 after the Fed’s June announcement that “our cautious approach to adjusting monetary policy remains appropriate.” That should help maintain continued investor interest in the restaurant space into 2017 and provide multiunit franchisees the opportunity to grow their portfolios.

A variety of factors, though, could temper the enthusiasm for fast-casual brands. These include the constant influx of competitors (particularly in pizza), poor site selection and value offerings of traditional fast feeders.

Pie Five, operated by publicly traded Rave Restaurant Group (RAVE), saw same-store sales tumble 4 percent in its most recent quarter, leading to the CEO’s exit. Highfliers Noodles & Co. (NDLS) and Habit Burger (HABT) have also struggled. “One of the lessons of the last crop of restaurant IPOs,” says AB Global Managing Director Bob Bielinski, “is that growth is harder than you think. Maybe growth stories will be subjected to more scrutiny by increasingly skeptical investors.” 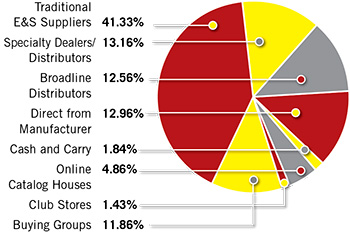 Franchisees acquiring or rehabbing locations per their refranchising agreements should not have problems borrowing money from banks. “In a low-interest-rate environment a lot of people are trying to add units. Money is cheap for franchisees,” says Aziz Hashim, founder and managing partner of NRD Capital Management, an equity fund that acquired franchisor Fuzzy’s Taco Shop earlier this year. 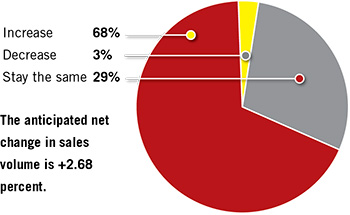 Operators’ Sales Outlook for 2017. Source: FE&S 2017 ForecastThe outlook for site availability in large, densely populated urban areas (New York City, Boston, Chicago and Washington, D.C.) has scarcely changed over the past few years, with high rents and intense competition for 2,100-square-foot boxes remaining key attributes of these markets. Rents in New York City’s main shopping corridors — typically costing more than $1,000 a square foot — are falling. “My primary focus is to find the box everyone else is chasing,” said John Epifanio, director of real estate for New York City–based Aurify Brands. The multiconcept operator runs 3 of its own concepts and franchises Five Guys Burgers & Fries in Manhattan, where the company will open 10 to 12 restaurants between this year and next.

Epifanio is also seeking space in Minneapolis, Chicago and the affluent suburbs of Washington, D.C. The veteran real estate executive predicts high rents and the usual scarcity of great sites make the nation’s capital a tough place to do business. “Everyone is growing their existing portfolio or coming into the market from elsewhere,” he says. 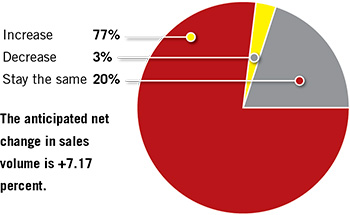 Dealer Sales Outlook for 2017. Source: FE&S 2017 ForecastOnce you find a suitable location, can you staff it? That’s a vexing question as the unemployment rate — 4.9 percent — moves steadily downward. Worse yet, it’s lower in many states. The U.S. Bureau of Labor Statistics reported this summer that job gains in “food services and drinking places” have slowed this year, averaging 27,000 per month to date and down from an average of 37,000 in 2015.

Another headwind: On Dec. 1, 2016, employers will have to abide by costly new overtime rules that boost the overtime wage requirement for “exempt” employees from $455 a week ($23,660 per year) to $913 ($47,476 per year). One strategy operators have employed is putting salaried assistant mangers back on hourly pay — a process that can be demoralizing for staff despite better control over labor hours.

Testifying before Congress’s Joint Economic Committee in July, White Castle System Inc. vice president Jamie Richardson warned lawmakers that salaried workers “often believe they are being punished or demoted, and some even lose trust that their employer sees them as professionals.” Richardson cited a survey showing 45 percent of retail and restaurant managers believed a change from salaried to hourly would make them feel they are working a job rather than pursuing a career.

Elsewhere, operators should expect efforts to boost the federal minimum wage, now $7.25 an hour, to ramp up next year. The greatest threat currently comes from states and local jurisdictions. Two states (Maryland, Oregon) and the District of Columbia, for example, have increased their minimum wage in the last 6 months, and 29 states have a minimum wage that is higher than the federal minimum.

Cleveland’s city council is considering a proposal to immediately hike the minimum to $15, though the measure is not likely to pass. The country’s most populous states — New York and California — have pledged to raise the hourly minimum to $15 by 2022. The Golden State’s minimum wage climbs to $10.50 next year for businesses with 26 or more workers. (More on the California situation in a moment.)

Operators should therefore be prepared to raise menu prices next year as a hedge against labor costs. This year’s significant drop in commodity prices, however, may help attenuate those increases should prices for dairy and proteins remain deflated into 2017.

“Legislators think if you own a restaurant you’re a multimillionaire,” declares Joe Rosato, director of government affairs for the Ohio Restaurant Association, referring to both local and national elected officials. As a result, he fears mandated predictive scheduling and paid sick leave may not get the legislative attention they need. These issues are likely to become the next workforce battlefields.

“You will see more activist movements at the local level in Ohio because many of the big cities are controlled by their friends,” Rosato maintains. Restaurant operators, however, needn’t worry about the state’s Republican-controlled House and Senate. “They know what these measures will do to Ohio’s economy,” he adds.

So, too, in California, where activists are having better luck convincing city councils that restaurant workers deserve more pay and paid sick leave. “2016 has been the year of the wage. A dozen cities have done their own wage hikes, and L.A. and Santa Monica have new sick leave policies,” explains Matt Sutton, vice president of public policy and government affairs for the California Restaurant Association.

Santa Monica also passed a citywide minimum hourly wage of $10.50 that began in July (the state’s is $10). Sick leave accrual rates include one hour for every 30 hours worked, and employees can carry over accrued sick leave annually.

The association’s top priority, however, is an onerous “fair-scheduling” proposal requiring restaurants to provide a 21-day work schedule listing all shifts for workers at least seven days before the first scheduled shift begins. If the employer alters the schedule with less than seven days’ notice, employers must offer modification pay.

“The bill doesn’t accommodate changes in the weather, for example,” Sutton gripes. “Rain could wipe out patio service, and the patio staff have to be paid even though you’ve sent them home. And who can predict traffic flow that far in advance, anyway?”