The foodservice industry’s status quo now includes slow but steady growth rates, a tighter operator focus on managing expenses and a more pronounced need for the supply chain to better articulate the return on investment their goods and services will provide.

As the foodservice industry starts to look ahead, forecasting what 2014 will look like remains a complicated exercise. That's because while the overall economy is better than it was, say, four years ago, it's not really that much better. Further complicating matters are looming uncertainties about the nation's employment situation, another potential battle over the U.S. government's debt ceiling and the affect the Affordable Care Act will have on restaurant operators.

"It certainly remains a positive growth environment but it is not that rebound to prosperity that the operators and consumers would like. And the environment is extremely complex from the consumers' perspective, specifically related to employment," says Hudson Riehle, senior vice president of the National Restaurant Association's Research and Knowledge Group. "Ideally, there is no major externality that inserts itself into the second half of the year that weakens consumer confidence."

To many industry observers, this period of slow, plodding growth seems to be the new normal. "Among the economists, there's not much divergence as to whether 2014 will be the breakout year," Riehle says. It won't. "Some economists now say the full recovery is in the 2016 or 2017 time frame. Since the recession started in the fourth quarter of 2007, this slower economic period will approach the decade mark if those projections hold true. And some consumers are losing patience."

The good news is that the restaurant industry remains on track to post a 3.8 percent growth rate in 2013, according to projections from both the National Restaurant Association and Technomic. "This year the industry basically performed pretty much according to our original forecast from last year," Riehle says. 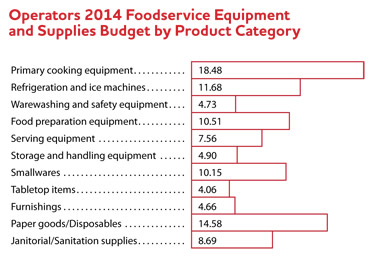 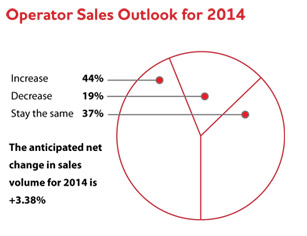 According to Technomic, things will improve slightly in 2014 when the industry posts 4.1 percent growth. "I don't think we are going to see the market break loose," says Darren Tristano, executive vice president of Technomic. "We will see a mixed bag of success and failure. For the short term, this is the new normal: small growth overall but a little more consistent."

And while things are certainly better, it is equally important to point out that foodservice industry growth continues to lag behind pre-recession levels. For example, in 2007 the restaurant industry grew 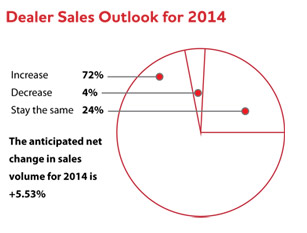 by 13.5 percent, compared to only 3.8 percent last year, according to Technomic's data. Part of the reason the industry continues to show moderate improvement is the fact that overall economic outlook remains varied by geography.

"What we saw from 2000 to 2007 was some incredible growth and certainly the pace of the industry was much faster than our population growth," Tristano adds. "As a result, we overbuilt. So 2008 to 2012 was a correction. We are close to a point of equilibrium. There is not a lot of population growth that will drive more consumers to eat away from home."

Along those lines, consumer sentiment, as tracked by the Conference Board, took a big hit during the recession but continues to gradually improve. In July the Conference Board reported consumer sentiment registered 80.3, a dramatic improvement from its all-time low of 25.3 in February 2009 but still a far cry from its all-time high of 111.9 in July 2007. "Consumer confidence is better but it is still a couple plateaus down from where it was before the recession," Riehle says.

The restaurant community still faces several consumer-related challenges. "It isn't like we are seeing more diners eating out. And the cost of food to the American household is relatively stable," Tristano says. "Consumers are getting pinched on gasoline and we're certainly paying more for healthcare in recent years."

Riehle adds, "Consumers have pent up demand in other purchasing areas, such as automobiles. So there is this constant reallocation by the consumer toward areas in which they have to spend and want to spend. Convenience continues to be a substantial driver of restaurant industry sales. The challenge for the operator community is to remain top of mind with the consumer so that the consumer continues to patronize and spend within the industry."

But consumers' affection for restaurants remains one of the industry's true strengths, one that has allowed it to persevere in recent years. "The industry is fortunate in that 93 percent of consumers want to go to restaurants. That's such a high number that when cash on hand improves consumers do want to spend," Riehle says. "It is important to look at industry performance in the context of the opportunities the consumer has to spend. And in that respect the restaurant industry has outperformed other industries in recent years. That's why there is no substitution for employment growth. Without any substantial employment improvement, it dampens the industry's upside potential."

Indeed, few would argue that the muddling jobs picture remains a key obstacle to more robust growth for the foodservice industry. "Even though employment is better and the pace by which it gets better is improving, it's still not that fast," Riehle adds. "When there is any type of employment growth it increases consumers' demand for convenience and it acts to bolster income."