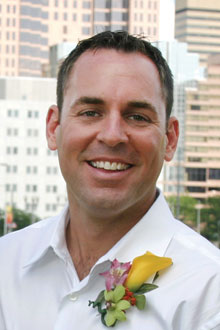 Dan Farmer
Dan Farmer is a family man. Though it sounds like a cliché, Farmer's dream of having a strong family, even before he married his wife April, ultimately is what drove him to the service industry and to his current role as director of business development for Commercial Parts and Service, Inc., in Columbus, Ohio.

"My career here with Commercial Parts & Service affords me the opportunity to balance my work life and my family life and that's something that is very dear to me," says Farmer, father of four-year-old daughter Emerson and four-month-old son Liam.

Although the service industry was not on Farmer's agenda early on, his first job with Baskin & Robbins at age 15 set the stage for the future. After spending four years in the U.S. Navy, Farmer moved back to Toledo, Ohio, his birthplace, and worked briefly as a manager with Burger King before being hired by Applebee's. He helped Applebee's open its first two stores in the Toledo market as a bar manager and a kitchen manager.

"I had a couple of 70- to 80-hour work weeks and was always working weekends," explains Farmer. "I realized that if I was going to have the family life I wanted I'd need to go back to school." He left Applebee's and headed west to Cal State University, San Bernardino for a degree in Communications, graduating with honors in 2000.

Little did he know those years serving as executive editor of the college newspaper would later pay off as a business development director. In search of his next career move, Farmer headed to Columbus, Ohio, to continue working with Applebee's. After approaching his cousin about a job at Commercial Parts & Service, Farmer took on a parts position. Though it was the only job available, it helped him quickly learn all about the business.

"I was dating my wife at the time and it felt like I was taking a step back after college, but she supported my move and shared my vision of where we wanted to go," says Farmer, who went on to quickly move up the ranks and into a sales position that did not exist before he arrived. "I would go out and talk to end users to explain our services to them and started getting more involved in trade shows across the country."

His affinity for sales and relationship building propelled Farmer to leave Commercial Parts & Services briefly to become a manufacturer's sales rep for Bauer Marketing Group in 2005. "Everything I did as a manufacturer's rep tied into the service industry, and I couldn't help but begin making those associations and think about how Commercial Parts & Service could benefit," he says. That loyalty for the business and passion for the service end of the industry drove him back to Commercial Parts after just one year away. But those lessons learned have proved just as invaluable as his communications and marketing background.

"We were able to open up more lines to the dealer and rep community, and a lot of that came from being on the manufacturer's rep side," Farmer says. "I had a much more empathetic standpoint toward dealers and reps and a better understanding of what they have to deal with every day."

Farmer gets heavily involved in many facets of the company, including the development of a preventative maintenance template, designing marketing materials and pushing the company to stay involved with CFESA. And with Steve and Jeff Sliter, a third generation of leadership taking over, they constantly encourage others to share their vision of the company.

"I'm blessed to work for a company that allows me the flexibility to add to the company whenever and wherever I can," Farmer says. "Steve and Jeff have always listened to my ideas and have given me the resources to work on whatever I feel will benefit Commercial Parts & Service."

Farmer is serving his second term on the CFESA board of directors and has been heavily involved with the marketing committee. Some of the projects he worked on include a total re-branding of the CFESA image and pushing CFESA to exhibit at RFMA and the School Nutrition Association show.

As a result, Farmer has sought to work with more facility managers at national chains in the next wave of growing the business. Part of that includes maintaining an ongoing, working relationship with these managers to help them both with parts supply and replacements in addition to ongoing equipment servicing, and most importantly establishing customized preventative maintenance programs for their equipment.

Farmer's story is a success story, and he's not even middle aged. A hard-working, ahead-of-his-time personality who paid his way through college, Farmer now looks to pass those values on to his children, just as he's shared these values with his company, colleagues and CFESA.