Known for his wide embrace of new technologies, green building practices and a teaching philosophy that has helped younger industry members at both his firm and his associations succeed, James Camacho has remained one step ahead of competition over the years. It’s his progressive attitude and eagerness to mentor, that have earned Camacho his spot among the 2010 Top Achievers. 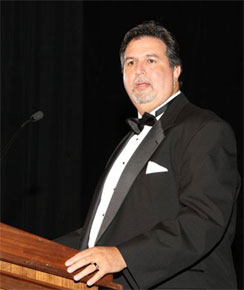 James Camacho
What began in the basement of his father, Joseph’s, Atlanta house 48 years ago has grown into a full-service design and consulting firm with eight employees, including his wife Cathey. One project manager, Glenn Harshman, has been with the firm for 16 years, while several others have been with the company for nine to 10 years.

“It was literally April Fool’s Day when I officially started working for my dad’s company,” Camacho recalls with a chuckle. He began when he was AGE but his interest in the business stemmed as far back as childhood.

“I would go down in the basement and play on the drawing boards, and during the summer my father took us to job sites,” Camacho says. Later, he took drafting classes in high school and studied business administration at what is now Georgia Perimeter College. During and after college, Camacho worked his way up from a draftsman to a project manager and designer, eventually becoming company president in 1991. He bought the company in 1996, and his father continued to work and help the company until two weeks prior to his passing in 2005.

One of the reasons Camacho says he loves his work is that it is always changing. Perhaps it’s the firm’s diversity of projects, which includes such foodservice providers as K-12, B&I, correctional facilities, country clubs, healthcare facilities and senior living. Camacho Associates also designs commercial laundries.

“One thing we’ve really been focused on this year is working on how we can offer additional services to our clients, outside of the traditional design and management services we already offer,” Camacho says.

The firm now helps its noncommercial clients set up budget schedules and guidelines for long-range, large capital investments. The result? A growth in revenue streams for Camacho Associates and value-added service for the customers.

Camacho encourages all of his staff members to get LEED-accredited. At presstime, one staff member had just earned LEED AP status, two others had signed up for the studying materials, and Camacho was a month away from testing for the same level of accreditation. Camacho says he first thought it was important for himself to get LEED-accredited when he began meeting with principals from an architectural firm who had all earned that status, which can take up to a year or longer including study and exams.

“I think it’s responsible for me as a leader to not only understand and work with LEED, but also to study and pass the test myself,” he says. “I think more people are realizing that this is the way design is going to go. We’re not just doing it to get the points for certification; we’re doing it because it’s good for the building and good for the community.”

LEED and green aside, though, Camacho’s main goal on projects is to listen to his clients and get them involved early and often. “Close collaboration between the client, myself and other design team members like the architects, engineers and interior designers can eliminate 90 percent of problems on a job site because we can review all the various drawings and make revisions together.”

Camacho brings lessons learned on projects and through the years to his staff. “I encourage my team members to look at projects other consultants have designed, read magazines, talk to other people in the industry to find out what they’re doing,” he says. “We should be able to see what’s out there and try new things.”

Camacho often organizes outings to local restaurants and asks his staff to share with the group what they noticed about the design. “With today’s generation, everything is related – where they go to school, where they play, where they live – it’s all intertwined, and that has an impact on how we design,” he says.

Also active in various associations, Camacho shares advice, helps newbies and networkswith others. “You get to a point when you’ve got to give back to the industry that has given so much to me,” he says.