Occasionally, the difference between success and failure can be something as simple as being a good listener. Such is the case with Marc Tell and The Sam Tell Companies. “When you see a customer, don’t talk – just listen,” Tell says. “Because if you are open to listening, they will tell you everything you need to know to be successful.” Tell and his team have followed this wisdom as the dealership has evolved the past 15 years. 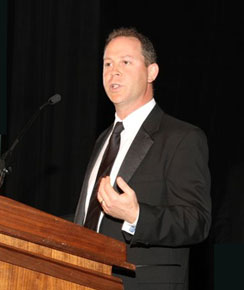 Marc-Tell
The Sam Tell Companies was founded by Tell’s grandfather, Sam, and his father, Neil. Both Sam and Neil worked as salesmen for Lily Tulip, a paper cup manufacturer, and sold a few miscellaneous items on the side. In 1956, Sam set out to start his own business and Neil joined him in 1960. The company was incorporated in 1964, and Sam retired from the business in 1978.

Marc Tell did not go directly into the family business. After he graduated from the University of Vermont with a degree in history and political science, Tell taught high school history. Tell’s parents caught him off guard when they told him of their intention to sell the business. Tell told his parents he would try working in the business for a year and found that it became not only a great job, but a passion.

“I wanted to do something on my own,” Tell recalls. “I did not want to just go into dad’s business. It just seemed too easy. As it turns out, it was the right business for me, and my life had actually led me to that point without my knowing it.”

Once he joined The Sam Tell Companies, Tell’s career progressed rapidly. In 1991, five years after he first joined the business, he became the dealership’s president. And when his father retired in 1995, Tell became a partner in the business with Dan Saltzman, who had joined the company in 1981.

It was around that time that The Sam Tell Companies started to evolve. Until the mid-’90s the dealership was mainly a smallwares and tabletop specialist. At that point it began to sell foodservice equipment, purchased a few companies and eventually grew into the company it is today. “We had a lot of loyal customers who really liked doing business with us,” Tell recalls. “They would open a new restaurant and say, ‘Can’t we just buy everything from you?’ Finally, one day someone approached us and said they would run the equipment part of the business, and we expanded our product offerings.”

Over the past 15 years, the company has grown from one location with 13 employees and sales revenue less than $10 million to a full-service foodservice equipment and supplies dealership with 80 employees, two locations and revenues of more than $33 million. As the business has evolved, the dealer’s target customer base went from mainly delicatessens and coffee shops to fine-dining restaurants and hotels.

“We really have followed our customers – they direct us,” Tell says. “My dad taught me that if you are there for the customer, they will be there for you. A customer may open a coffee shop but tomorrow it could be a catering hall. No order is too small for you. You don’t know where it is going to come from, but if you are going to open your doors, you are saying you are going to service everyone that comes in the door.

“The truth is if my grandfather or dad came into the company today, they would not recognize the business,” Tell continues. “But the fact is we run it the same way they did 50 years ago. We build our procedures around what the customer wants. So Sam and Neil might not recognize what we do, but they will understand why we do it.”

Tell has an open-file-cabinet policy in which any employee can look at any invoice, purchase order, etc. “I believe in sharing information and that information is power,” he says. “It helps our team because they are given the power to provide answers and produce results. That has benefited us particularly in this downturn. Nothing is hidden. Everyone can see that sales are down so they are working that much harder and have the information to make decisions.”

The dealership’s nine-member executive committee meets every Monday morning. Each week they invite a different employee to attend to see how the business is doing and get a better idea of the successes and challenges it faces. In addition, the dealership has a sales meeting every Friday. Occasionally vendors attend these gatherings to provide product demonstrations, and other times the staff will talk over pizza.

This approach helps create a tight-knit environment. “I would not call us a family, but we are as close to it as you can get. The difference is that we like each other,” Tell jokes.