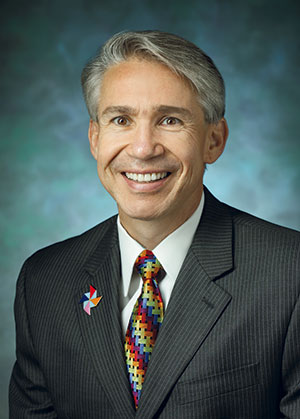 Angelo MojicaJohns Hopkins’ patients, employees and visitors benefit from Angelo Mojica’s vision. His lifelong love of food comes through loud and clear in his role as a healthcare operator. But, he might have taken a different career path if it hadn’t been for his brothers.

As the middle of five boys, Mojica grew up in the projects in Brooklyn, N.Y., where survival meant being tough. Mojica loved shopping and cooking with his mother. When he turned 16, he wanted a set of pots for his birthday. To this day he remembers the bruises his older brothers gave him when they learned Mojica had asked for pots.

That experience stuck with Mojica. When a high school guidance counselor asked what he liked to do in an effort to explore college options, he said, “I like to eat and cook.” The counselor said, “Well, you can be a chef or a dietician.” Guessing what his brothers’ response would be if he said chef, he chose to go to school to study dietetics.

“I didn’t even know what a dietitian was,” Mojica says. He went on to not only complete his undergraduate degree from the State University of New York but also earn a master’s degree in public health and nutrition from the University of North Carolina at Chapel Hill.

Mojica also eventually pushed aside his concern about what his siblings would think and learned the art of cooking, as well as the science of food, earning a culinary degree at Johnson & Wales. And, he then added to that academic pile with a doctorate of public health degree from the University of North Carolina. He grew more tough-minded as the years went on and those early sibling lessons added to his drive to succeed.

Mojica’s career path took him from spending a couple of years as a clinical dietitian at several facilities in the south before working for a foodservice contractor. During his 12 years in this role, he worked in roughly 20 different hospitals and gained “a ton of experience.” Because of that background, when Mojica walks into a kitchen now, he can identify any labor issues, food quality issues or equipment issues. Mojica immediately sees what he would do if it were his to change.

He took on the role of director of nutrition and food at UNC Health Care in 2005, where he was for a little more than 10 years. During this time, he won the IFMA Silver Plate Award for Healthcare and a number of other industry awards.

Establishing a Focus on Food Culture

In 2016, Mojica joined Johns Hopkins, Baltimore, as senior enterprise director of food and culinary services. The Health System is made up of six hospitals, which are under his purview. He oversees patient feeding as well as the foodservice for all of the retail operations at each of the six hospitals.

Mojica develops and implements foodservice programs, but, most importantly to him, he focuses on food culture. “Food should be the most important thing,” he explains. “A lot of times in the industry we get tied up in finances and labor issues. These are legitimate and important things but we get so clouded by those details we forget the one thing we are supposed to be doing is making good food.”

Having a culture of food means understanding the history of the food and insisting on authenticity. He gives the example of when he introduced Pho, the Vietnamese soup, to the menu. One of his chefs said he would just get some chicken stock and vegetables. Mojica disagreed, saying, if you knew the history, you would know that the broth is consommé, which is more complicated than chicken stock.

Teaching a food culture is a process. When he first came to Johns Hopkins, Mojica asked his team to bring in granola recipes. When the chef made up batches of each, the team expected him to tell them which one he liked. Instead, he had them taste and select. It became a process of understanding the best characteristics of a menu item, a conversation about food. The team became the opinion leaders.

“It’s the most important thing I do, developing food culture,” Mojica says.

If he’s going to do something, Mojica wants to be the best he can be. He also wants the people around him to be the best they can be. “I know when they do their best they feel so good. You can see it in their eyes. Then, everyone around you is positive – instead of someone walking down the hall who, when you ask how things are going, says ‘I’ll be okay when it’s five o’clock.’ I want people to be excited like I am excited.”

Mojica’s own wide range of life and career experiences have shaped the way he relates with his team and other associates. He describes his early days in the Brooklyn projects as “growing up poor.” Yet Mojica became a professional with multiple degrees and years of valuable experience. This has provided him with the ability to interact easily with everyone from entry-level employees to the medical doctors and PhDs.

“What is most important, in my opinion, is being close to the entry-level foodservice workers,” Mojica adds. “Their challenges are so unique.”

An Approach to Change

“The way I approach change is to drive it,” Mojica proclaims. “Nobody likes being told what to do, so I try to stay ahead of people telling me what to do.”

Change involves ideas and Mojica says he has a million of them. What if we make jello from scratch? Can we make an authentic Neapolitan pizza in 90 seconds?

Mojica has a virtual idea tree in his head. He articulates an idea to the team and then puts it in the idea tree. Sooner or later, it will come out of the tree and be executed.

When turning an idea into reality, Mojica tries to stay as involved at the base level as he can but, while he wants to be hands on as much as he can, he also wants to empower people to do it themselves.

Mojica launched a burrito program at UNC. For the first six months, Mojica worked on the line, serving and rolling burritos. For the next year and a half, he went out to the retail venues every day and made sure everything was right. One day, one of the items was missing. When he spoke to the server, she said that the team had tasted it and it didn’t meet their standards, so they sent it back. “That’s when everybody knows the vision,” Mojica says.

With his strong vision for the importance of authentic food and a strong food culture, Mojica plays a leadership role in how to succeed in healthcare foodservice. The execution of his vision provides a positive experience for patients, employees and visitors to the six Johns Hopkins hospitals he serves.