Tracy Taraski's not one to carry on — especially about herself. Taraski leans toward the softer-spoken side, but anyone who fails to listen carefully risks missing her quick-witted jokes and years of foodservice and design wisdom. Working in the challenging sports foodservice arena — no pun intended — that wisdom comes in handy. 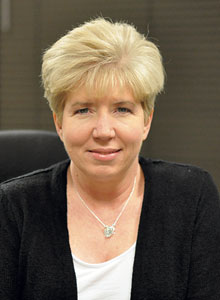 Tracy Taraski, Manager of Design Services, The Bigelow Companies, Kansas City, Mo."Because we focus on one market segment, Tracy has become a true expert in her field and understands the unique nature of our clients who have to make their money in 3 hours, not over the course of 24 hours or a week like a traditional restaurant," says Chris Bigelow, owner of The Bigelow Companies, a consultancy in Kansas City, Mo. focused on stadium and sports arena foodservice. "Everything has to be done for speed and high volume, and Tracy excels at translating that into a reality."

While Bigelow takes the lead on new business development, the two collaborate when it comes to concept development and strategy, and then she takes things from there.

"Tracy deals with the inception of a project from programming, to meeting with clients, to working through actual drawings and creating the construction documents and specs, all the way through to the punch list at the end," Bigelow says. Taraski is also responsible for managing two other designers on their team, assigning specific tasks as well as assisting with budgeting and equipment tagging. As the project manager, she liaisons with outside team players, including architects, contractors, mechanics, plumbers and others. It's a juggling act to be sure.

To say Taraski is detail-oriented and meticulous is an understatement. "She memorizes model numbers," Bigelow says. "A chef will say, 'I need X equipment,' and she will quote the make and model straight from the manufacturer's catalogue. That's the level of detail we're talking about."

It's no surprise that as a child she used to sketch elaborate designs. "I've been drawing floor plans and designing my dream home since I was 10 years old, or maybe earlier," says Taraski.

Taking drafting classes at a local community college was a logical career move later in life. Through a classmate's connection, Taraski then went on to work for The Salvajor Company in her hometown of Kansas City, starting off in sales and then earning a promotion to the engineering department, honing her AutoCAD skills during the three years there.

After a short stint working for Libbey, Taraski landed at The Bigelow Companies after responding to an ad looking for someone with both AutoCAD and foodservice experience. The year was 1997 — Taraski started off assisting drafters by loading their sketches into computer-aided design programs, quickly working up to become a designer. It was a childhood dream job come true.

"One of my favorite projects was doing design work for the Green Bay Packers, since I'm a huge fan," she says. During a major renovation of Lambeau Field last year, Taraski led the addition of 11 new concession points of sale as well as 3 new, higher-end clubs at the new South End concourse. But the real kicker was designing and developing the state-of-the-art servery for the team players and staff.

"We worked with a nutritionist to come up with specific menus to 'fuel the machine,' so to speak," she says. "We broke down the menu into stations — there is a smoothie bar for fresh blends of protein powder, fruit and yogurt, and a vegetable station with a salad bar and steamed veggies and a protein station for all different types of meat." For the indulgence seekers, a grill station serves hamburgers and other standard fare, but everything is now done in a completely open kitchen for more of a "show" factor for the team, Taraski adds.

Another exciting project was working on concessions for the World Cup stadium in Brazil. International work presents its own challenges — though health department rules can be less stringent than in the U.S. "We had to create a lot of different menu items to cater to a diverse crowd — we developed stations for hamburgers and hot dogs, but also more traditional Brazilian and South American fare," Taraski says.

This year, Taraski's excited to continue working with another soccer stadium, this one in Italy, as well as on the Edmonton Oilers' hockey arena in Alberta, Canada. Stadiums in London are even more different — they don't allow spectators to consume alcohol while watching the game, and suite-style foodservice resembles more of a sit-down dinner versus the buffets you see in the U.S.

One of the most challenging things about stadium foodservice is the more-often-than-not unusual shape of the buildings. "We're always given these funky spaces and equipment has 90-degree edges, so getting the flow to work is challenging." Consultants must also create the high-end suites, clubs and lounges most venues want these days. At the university level, sports facilities are branching out with their foodservice even further — offering more ethnic items and fresh food made from scratch in on-site commissaries.

According to Bigelow, Taraski's "weak point" — if there is one — is that she never says no. "Which is why clients love her," he says. "No matter the challenge, Tracy will try to make it work."

But that's precisely what makes the job fun, says Taraski. "Every project is so different — it's exciting to be able to bring in a new element." Lately, that new element has been regional foods from the area around the stadium. Think: New England Clam Chowder at East Coast arenas.

"What's exciting is that stadiums now realize how important foodservice is, and how great a way it is to make money — it's no longer an afterthought," she says.

The make-it-work attitude works for Taraski, who takes a thoughtful approach to everything she does, her colleagues say. "The key point is being flexible and doing what you can with what they give you — make the best out of a bad situation," she says.

Spending time on the manufacturer side has also helped — being able to learn the ins and outs of different equipment. She continues to work closely with manufacturers and reps to stay on top of new equipment pieces and training.

Over the years Taraski says she's grown more confident, more laid back. "Chris taught me how to have a sense of humor and how to deal with customers on challenging projects," she says. "If you met me 18 years ago, I was shy and timid and getting up in front of a room full of men was very intimidating." Those days are long gone.

Outside of work, Taraski remains active as a professional member of FCSI, for which she serves on the board of trustees and networks with other consultants.

"It's great to talk to others and know you're not alone — they have the same trials and challenges you're going through — and it's great to be able to interact with manufacturers," Taraski says.

And literally outside, she enjoys long walks with her dog, Bosco, a happy lab mix, and occasionally scuba diving in Florida and where work might take her. She lives in Kansas City, Mo. with her husband Marty.

When it comes to the future of the foodservice industry, Taraski sees a continued emphasis on green building and design. "A lot of the projects we're working on are working toward LEED certification or at least LEED-style design," says Taraski, who says the Los Angeles Lakers' Staples Center achieved the latter. "It's becoming more important for us to learn what we can do to help our projects achieve LEED status."

Within her company, she and Bigelow also strives for sustainability. "Chris has always wanted to keep the company small, but what we're striving for is to become more efficient among our design team and in our output so we can continue to work on more and bigger projects across the country," Taraski says.