Manufacturers need him. Consultants respect him. New York certainly loves him. The feeling is mutual. 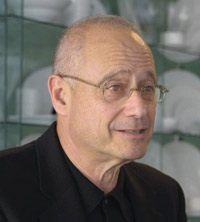 Armed with a thick New England accent from his native area and a reputation as a mentor for many colleagues, Posternak's straightforward approach paired with a calm, collected and caring demeanor has earned him many business partners and friends. It takes serious chutzpah to work the fast-paced New York market but Posternak has long been one of the leading manufacturers' reps in that region. His track record speaks for itself. Since the economic recovery began three years ago, PBAC has achieved double-digit annual growth, regularly outpacing industry averages.

PBAC is a business story born out of the 1988 NRA Show in Chicago. Posternak and founding partner Steve Bauer had just weeks before they left Traulsen to venture into the manufacturers' rep arena. "By the time we left the show, we had six clients," says Posternak. "Unlike a lot of rep firms, which at the time were second generation businesses, we started our rep firm from scratch without any lines whatsoever." It was a perfect match — while Posternak says he's more of a people person, Bauer focuses strongly on the products. Makes sense: successful manufacturers' reps must act as liaisons as well as sales people.

Prior to starting his own firm, Posternak spent 12 years chilling in Traulsen's sales department. But his career trajectory was anything but cold: Posternak quickly progressed from a regional sales manager to becoming vice president of sales and marketing by age 30. Eventually, the endless travel was wearing him down, and given the arrival of his twin sons, Posternak felt the need to refocus on the local market.

"Working at Traulsen gave me a solid base from which to launch our rep firm," Posternak says. "While there, I worked with many of the very best reps in the business, and was able to piece together a mosaic of what a solid rep firm should be in terms of best practices.

"I also became a rep during a time period when the role of the rep was being questioned by other industry partners," Posternak continues. "It became a personal goal of mine to raise the bar of the rep profession for all."

He did that through his active participation in MAFSI, including an 11-year stint on the association's board of directors and serving as its president in 1999 and 2000. While serving as president of a local chapter in 1996, Posternak gets credit for conceptualizing and founding the original MAFSI Business Barometer, which to this day gets cited in major financial and trade publications and serves as a benchmarking and forecasting tool.

"Before the barometer we'd start off our MAFSI meetings by asking all participants how their businesses were doing and you would get different non-additive answers from everyone," Posternak says. "We rolled out the new tool at a board of directors meeting in 2000 and then on the national level in 2002. We continue to update it each year." Since its inception, Posternak has analyzed the data and written a quarterly summary for the Barometer.

In addition to helping run a successful business and champion the MBB, Posternak remains an advocate for reps in the foodservice industry. "We're here to service the needs of the dealer, and act as an intermediary between the dealer and the manufacturer, but you have to be fair and reasonable to both parties," Posternak says. "Reps must also work with end users and, of course, consultants to stimulate the demand for the products that we sell. Given proper representation, manufactures' reps can in fact be the dealer's best friend."

At the same time, manufacturers rely on Posternak and the PBAC team to bring their products to market — swiftly, thoroughly and knowledgeably. As more manufacturers continue to merge and acquisitions ramp up, the rep's role has become even more relevant.

"Major manufacturers have achieved economies of scale in going to rep firms," Posternak says.
Posternak's become a local guy of sorts, having grabbed hold of the New York market. But his reputation is nationwide. "Working in sales for a national company is like mowing your lawn once a month as opposed to being able to manicure your property on a twice weekly level." He's closer, more in touch, and more in tune to his varied customers' needs as a result. PBAC's clients span multiple segments, including healthcare, schools, colleges and universities, hotels, independent restaurants, chains and B&I.

Most fledgling rep firms tend to specialize in just heavy equipment or supplies but Posternak and Bauer took a more balanced approach to starting their business. "Right from the beginning we wanted to be equipment and supply, with both front of the house and kitchen options," Posternak says. Today PBAC reps 15 manufacturers, considered a small group compared to other firms. "We don't want to rep the most brands, only the best ones," says Posternak. "In fact, the fewer the better because that means our relationships, concentration, and customer service is stronger. With 15 lines and 12 employees — that's almost a 1 to 1 ratio."