Emphasizing hard work, integrity, collaboration and relationships has helped Tom Ricca create a legacy that’s second to none and has earned him recognition as FE&S’ 2014 Hall of Fame Award recipient. 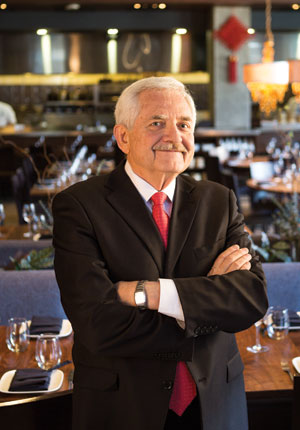 Tom Ricca. Photo by Paulbrokering.comWalk into many of the most progressively designed foodservice facilities in the nation, and chances are, Tom Ricca had a hand in their design — directly or indirectly. One of the most prolific consulting and design professionals in the industry, FE&S' 2014 Hall of Fame Award recipient spent the past four decades building a legacy defined by talent, innovation, mentorship, collaboration and unwavering dedication to both customer satisfaction and associate success. He'd insist that along the way he's had more than a few lucky breaks, but Ricca has leveraged any luck that has come his way with old-fashioned hard work and by consistently valuing relationships and professional integrity over personal gain.

Today, the Denver-based company he cofounded, Ricca Newmark Design (RND), stands as one of the most respected foodservice design firms in the nation. The company's portfolio touts more than 4,000 projects around the globe, touching all 7 continents and all industry segments — many commissioned by the most prestigious and innovative operators within their segments. Under his leadership, RND has designed award-winning facilities for the Ritz-Carlton and Hyatt Hotels internationally; Disneyland and Walt Disney World; top private and public universities, including Harvard, Vanderbilt and the University of California, Berkeley; medical centers; public school districts; leading Colorado ski resorts; trendsetting independent restaurants; and premier sporting venues, including the new Dallas Cowboys stadium. In addition to its Denver headquarters, RND now operates principal- and partner-led studios/offices in New York, Washington, D.C., Boston, Outer Banks, N.C., Grand
Rapids, Mich., San Diego, Seattle and Shanghai.

Ricca himself is an active member of the Foodservice Consultants Society International (FCSI). He has served on the FCSI board of directors and the FCSI Educational Foundation board of directors. In 1996 Ricca was elected to the prestigious FCSI Council of Fellows and served as the council's chair in the mid-2000s.

Beyond his direct industry contributions, Ricca's impact on the industry multiplies exponentially through his teaching. For the past 40 years he has taught hotel and restaurant design courses at the University of Denver's School of Hotel and Restaurant Management. A previous University of Denver advisory board member, he was also called in to provide input on a new hotel property being planned for the campus.

In addition to his ongoing teaching duties at the University of Denver, for several years Ricca taught part of a summer course on student center design at the Harvard Graduate School of Design. Teaching and being around students, he says, helps to keep him young and tuned in to what the foodservice industry leaders of tomorrow are thinking.

Still working, drawing by hand and designing every day, Ricca takes satisfaction in having built a successful, well-regarded business that employs, or at some point has employed, some of the best and brightest designers, architects and consultants in the business. "The joke is that everyone in the industry at one point or another has worked for Tom," says Tarah Schroeder, who joined Ricca Newmark Design as a project manager in 2007 and is now a principal. "Not only has he shared his design processes and ideas with all of these people who have worked here, many of whom have now gone on to create their own firms, but the culture of innovation, integrity, caring and customer satisfaction that he has created has been instilled in them as well. That's a very broad and significant contribution he's made to the industry."

Claudia Scotty, a former principal of Thomas Ricca Associates and current partner at Envision Strategies, agrees. She met Ricca when she was just 19 years old at the University of Denver. He was both her instructor and faculty advisor. She was one also of his first hires back in the early '70s. "Tom is renowned in our industry for being incredibly creative and a sound foodservice designer, but one of his biggest contributions to the foodservice design and consulting industries is the way he mentors and has mentored so many people who have gone on to do great things in the industry," Scotty says. "That along with his incomparable professional integrity is a truly great part of his legacy."

Ricca received a degree in architecture from Notre Dame University in 1963, a program he entered with lofty, Frank Lloyd Wright-esque aspirations. Not too far into it, however, he became disillusioned — not with architecture, per se, but with his prospect for greatness within the architectural community. "I was successful at Notre Dame, but I saw other guys in my class, some of whom consistently blew me away with their creative talent and thinking way beyond standard architectural design," Ricca says. "I got to the point where I concluded that I didn't have the talent to be a Frank Lloyd Wright. I didn't feel my talent was going to take me to great heights."

It was during time spent in the military after graduation that Ricca discovered a talent and a passion for something that would take him to great heights: foodservice facility design. "After I graduated from Notre Dame, I was in ROTC, and I went into the U.S. Army Transportation Corps. I wanted to be in the Corps of Engineers because of architecture, but that's a combat branch, and my eyes weren't good enough," Ricca says.

After two years stationed in Arizona, he spent a year in Vietnam serving as commander of a transportation company stationed at Cam Ranh Bay. That posting, he says, was the catalyst for what would become a distinguished 40-year foodservice career.

"I took a real interest in the mess hall because, in that part of the world and in those times, mealtime was the only good part of the day for most of the troops. I started working with the mess sergeant. The dining hall was basically a Quonset hut with a sand floor, but we made it as nice as we could. We started fixing it up and creating interesting menus. By the time I left Vietnam, my company had won six consecutive awards for best mess hall in Vietnam. Nobody really paid attention to that, but it was a big deal for me and got me hooked on dining design. When I got back I was sent to Fort Campbell, Kentucky, where they made me Officers' and NCO Club liaison. I was in charge of working with the club managers, which again got me connected with foodservice."