It all starts with the story. This is the Disney way, and it has been for decades. 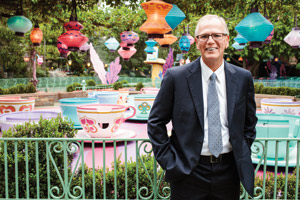 Martin Cowley, Senior Manager, Design and Consturction, Walt Disney Parks and ResortsIt's also how Martin Cowley, senior manager of design and construction for Walt Disney Parks and Resorts, says he and the team begin to design all of Disney's food and beverage concepts. And, this is our story about the FE&S 2013 Hall of Fame award winner: 40-year veteran of the industry, 20-plus-year veteran of one of the largest companies in the world, NRA Show Kitchen Innovations (KI) Award judge and so much more.

Martin Cowley grew up in Anaheim, just three blocks from the so-called Happiest Place on Earth, going every weekend as a kid. "Disneyland has always been a part of my life," says Cowley, who for the last 24 years has overseen aspects of the company's food and beverage program, in Anaheim, Orlando, Hong Kong and soon, Shanghai. That's 11 parks in all, not including the successful Disney Cruise Line. From the simple snack bar to bountiful buffets and banquets, quick-serve spots, private clubs and Disney's five-star, fine-dining restaurants, no project is too big or too small for Cowley.

Our group enters Cowley's Anaheim stomping grounds through a back door, and we are immediately thrust into the Disney experience: tea cups are flying, Mickey is mingling, and princesses are prancing. There are strollers everywhere, kids laughing, parents tugging, the sound of carousel music and frozen beverages being slurped in the background. The smell of churros cooking somewhere adds sweetness to the air.

Whether you are an adult returning to Disney for the first time or a full-out newbie, there's enough stimulation here to make one's head explode. Somehow, Cowley seems unfazed by it all.

Even on this unseasonably cool and sunless day, the Anaheim park is packed. Cowley, our group leader, comfortably strolls through the park, effortlessly weaving through the crowd like a deer through dense forest. In fact, people seem to part for him. Little does he know that we're trailing behind him, trying not to knock down small children or crash into strollers. This is certainly not your typical day at the office.

The same could be said about Cowley's job in general. Though he has a quaint, windowed space set up at Disneyland's main office building – lined with blueprints, by the way — he's more often seen walking and working the park rather than sitting behind his desk. Cowley also travels to other Disney parks and resorts, including Orlando, if he's not on his weekly five-hour conference call with that team. While working on Hong Kong Disneyland, just before it opened in 2005, he flew back and forth every two weeks. Talk about jet lag.

Suddenly, Cowley ducks behind a doorless, themed façade, and we're instantly backstage at Disney. It's eerily quiet, almost peaceful, back here. Off-stage cast members catch their breath, grab a bite to eat or enjoy a shot of espresso between scenes.

You see, at Disney, everything is a show. "That's how Walt designed it," says Cowley, who often refers to the legend by his first name. "We don't call our employees 'staff,' we call them 'cast members,' because they have a role in the show."

Disney's cast is in the happiness business — literally. So it's no surprise that when you give it your all, sometimes you need a break or a simple boost to give some more. Foodservice backstage is just as important as onstage, says Cowley, and ranges from all-night coffee kiosks to full lunches and snacking options.

In a way, backstage Disney reminds me of Cowley, or maybe it's the other way around. He's like the set designer and crew — all in one. Outsiders may enjoy their food and love the ambiance, never knowing the man — and the people — behind it all. Even Cowley himself is unaware of his own influence. Perhaps the person most surprised by Cowley being named FE&S' first non-dealer winner of the magazine's Hall of Fame Award was Cowley himself. He didn't understand why FE&S was recognizing him at first — as if more than two decades managing the design and construction of key food and beverage projects for the largest, busiest theme park company in the world, plus nine years as a founding KI judge and decades working on food safety regulations aren't enough to warrant some industry recognition.

"To say Martin is very humble is an understatement," says Mark Taul, food and beverage operations manager at Disney, who collaborates with Cowley on equipment and new construction. "He does so much for Disney behind the scenes, including the nitty-gritty work like making sure the hood system is set up right and that there's enough gas and proper flooring. It's those things the guest doesn't see, but to us in the food and beverage industry, they are critical."

"Martin is an all-around great guy," says Larry Lanier, FCSI, CFSP, owner and president of Laschober+Sovich, who spent 19 years at Walt Disney Imagineering (WDI) as a foodservice designer, working side by side with Cowley. Even after he left WDI in 1995, Lanier has continued to work as a contracted consultant on projects with Cowley, including the park in Shanghai. "He has no ego, no attitude; he's just very nice, easy to talk to and has a great sense of humor. He's the type of person who's easy to befriend, so that's why a lot of people in the industry like and respect him."

Richard Geiger, senior project manager of resort renovation and design at Wyndham Vacation Ownership, agrees. "Martin is the quintessential nice guy," says Geiger, who worked at Disney with Cowley for many years, developing Disney California Adventure and the foodservice program for Hong Kong before leaving the company in 2006. "He truly cares about the people he works with and the people in his industry. He is also passionate about food safety and innovation; he truly lives his craft."

Geiger also pointed out Cowley's humble, low-key attitude. "Martin has an uncanny ability to connect with people and gain their confidence and draw the real issues out so that, together, solutions can be reached. It doesn't matter if he's working with a staff worker in the dishroom or a company president; he relates to everyone with equal professionalism and sincerity, and that's a real gift."