Facility Design Project of the Year
Donna Boss May 01, 2009

Merging function and form, this university's marketplace-style dining operations provide a front-line and back-of-the-house showcase for equipment and supplies. 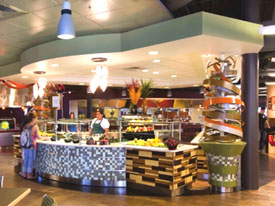 Freestanding and overhead sculptures bring a distinct, fun and artsy ambience to The Ram’s Horn marketplace.

Socialization, convenience, flexibility and access to freshly prepared foods rank high on the list of priorities for students at Colorado State University (CSU) in Fort Collins, Colo. A new residence option, Academic Village, which opened in August 2008, answers the needs of 2,100 students by giving them an intimate community experience.

A highlight of the new village is the two-story Academic Village Commons. The Ram's Horn dining facilities in this 44,000-square-foot structure earned top honors in FE&S' 2009 Facility Design Project of the Year competition. 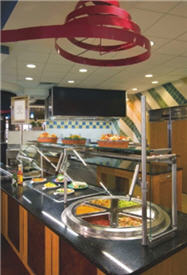 The Tex-Mex station features salsas, guacamole and sour cream that rotate on a refrigerated wheel called a salsa Susan.
Judges were impressed by the merging of flow and function in the layout design and the use of materials to create a creative, interactive, contemporary and invigorating environment. They also gave accolades to the aesthetics as well as to the approaches taken to incorporate solutions to necessary challenges; these include venue flexibility, menu diversity, creative queuing, and speed of service. What's more, the focus on equipment selection to meet sustainability goals and enhance labor efficiency also received the judges' nods of approval.

The entire budget for the design and building of Academic Village totaled $46 million. The Ram's Horn's portion of that cost was $18 million. The foodservice equipment investment totaled $2.5 million.

"Cues for the design were taken from the retail industry, allowing fresh ingredients and equipment to be displayed so nutritional value is emphasized," says Deon Lategan, director of Residential Dining Services at CSU. "Also, we paid attention to contemporary restaurant cooking styles. I challenged the architect and project team to create a facility that brings a 'wow!' response from students, faculty, visitors and staff entering the building." 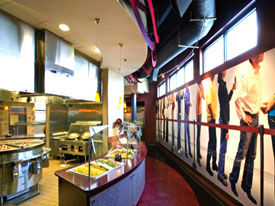 In addition to a Mongolian grill, the station features woks that staff use to prepare stir-fried foods.
The judges agree that The Ram's Horn evokes a distinctive "wow" response. Stations with visible equipment on display include the Filling Station; a beverage station; Tex Mex with a rotating salsa display similar to a "lazy Susan," and grills with hydraulic tops; a bakery station; Comfort Foods featuring induction cookers, a pasta cooker, steamer and conveyor oven; a sauté station that also uses induction cookers; the Mongolian Grill with the grill and gasfired woks; a carving station; a salad station; and the Nutrition Information kiosk.

The judges said the "wow" also extended to the project team's ability to meet routine and special challenges. "The project was a little over budget initially, so we shrunk the footprint," says Al Moller, studio principal, Ricca Newmark Design. "However, we maintained the flow in the servery so customers can move around easily between stations. We located stations so the venues with the greatest demand aren't in one area. For example, the deli is pulled to the back of the servery away from the Mongolian Grill. In addition, there's enough storage near cooking areas so staff don't have to make extra trips to get food needed during peak service periods."

Other highlights give staff flexibility to open and shut stations during peak and slow periods; focus on the cooking platform instead of only a themed concept; and increase service speed by offering two service choices, one with customized entrées prepared to order and the other with prepared dishes served from hot decks.

The Ram's Horn's demonstration of labor savings and efficiencies were also significant to the judges. The entire servery can be closed in the late evenings. On the lower level, a late-night espresso/smoothie bar and a convenience store remain open until 1 a.m. The Sports Grill provides a casual dining experience.

Going trayless, specifically by eliminating the use of roughly 7,500 trays per day throughout the entire dining complex, has resulted in significant labor savings. The removal of serving trays also contributes to sustainability efforts by lowering plate waste by 50 percent. 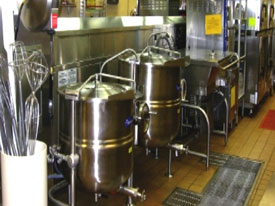 In the kitchen, kettles, a tilting skillet and a roll-in blast chiller produce food that supports the front-of-house venues.
Lategan gives credit to the six combi ovens and a blast chiller as additional contributors to labor efficiencies. They also help the operation more easily comply with sanitation standards.

The Ram's Horn has managed to save substantial energy costs as well, the judges noted. Lategan expects a 40-percent reduction in energy costs with a 3.1-year return on investment, thanks to variable exhaust hoods equipped with thermal/optical sensors that sense the temperature and particulate load within the hood canopy thereby optimizing fan speed and air flow.

Lategan also anticipates that the two closed-loop pulpers, which eliminate the need to use garbage disposals, will save 120,000 gallons of water per month. The use of the pulper and recycling efforts have reduced the waste stream by 70 percent.

Another sustainable feature is the use of a highly efficient indirect cooling process allowing staff to reduce the size of the water chiller by 50 percent, thereby lowering the cost of the chiller equipment and operating expenses.

At Colorado State University, The Ram's Horn is raising the learning bar for students, faculty, staff and visitors through a dining atmosphere that marries form and function with contemporary lifestyles. 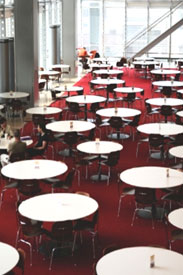 The designers of The New York Times Café faced daunting challenges to configure the equipment layout in a 6,975-square-foot servery and 7,890-square-foot kitchen in a building featuring a double-skin curtain wall of clear glass with a screen of ceramic rods. The judges appreciated the creative approach taken by the architects and foodservice designers to incorporate the natural light from the floor-to-ceiling windows into the design, position stations and equipment to accommodate large numbers of guests during peak periods and keep sight lines clear to support traffic flow. Our judges also admired the inclusion and positioning of kitchen equipment to allow staff to provide food for multiple functions, such as marketing events and banquets. Attention to sustainable energy use and other green practices stood out, as well.

About the photo:
Light penetrates into every square inch of the dining room through a titanium steel structural curtain wall. Horizontal ceramic rods on the building’s exterior provide a sunshade to block half of the sun’s energy. The windows also allow passersby to see inside the building. The chrome-based, white round tables, chrome chairs, red carpet and red and yellow ochre accent walls come alive in this space. Views of neighboring buildings are visible on three sides of the space. 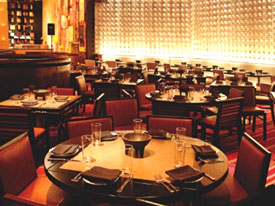 In the main dining room, warm lighting creates a comfortable atmosphere for large and small groups, and the décor invokes a Mexican bazaar. A candle-lit serpentine chandelier of glowing glass gems hangs in one dining area, while an ancient, stone-carved Mayan temple of fire connects the main dining room to the rear private dining room lit with flickering candlelight reflecting off copper-colored glass. In the dining room, textured plaster walls are covered in cast sugar skulls.

The design flow, well-defined storage areas, isolated prep areas that allow compliance with sanitation standards, the use of cooling sinks, a U-shaped production station, a sensible and efficient dishroom, and riveting interior décor are among the many features that impressed the FE&S Design Project of the Year judges about one of Las Vegas' newest restaurants: Dos Caminos. They also noted obvious demonstration of economical consideration in the facility's planning stages, as well as impressive attention to detail and equipment needs.

The 18,600-square-foot Dos Caminos sits in the new Palazzo Resort Hotel Casino, located next to the Venetian Resort Hotel Casino. Guests enter into a dramatically designed bar and lounge area and move next into the adjacent 300-seat restaurant.

No doubt the interior design attracts customers to Dos Caminos. Also as important is the efficient, sanitation-conscious kitchen layout and design that allows staff to produce compelling menus for large numbers of guests. When all this comes together, the judges noted, the result is remarkable.