Facility Design Project of the Year
Donna Boss May 02, 2016

Why it Won: The Judges’ Comments

From its modest beginning in a converted family-owned abrasives factory, Surly Brewing MSP has grown from one 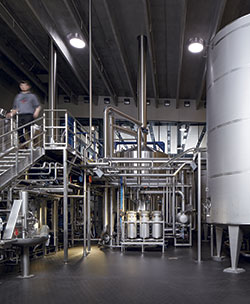 Inside the brewery at Surly. Photo courtesy of Rippe Associates; photography by Corey Gafferman's passion for home brewing into a notable cultural addition to the Twin Cities.

The idea of creating a multivenue concept that includes a beer garden came as a result of touring similar facilities, such as the Stone Brewery in San Diego, Victory in Pennsylvania, Founders in Grand Rapids, Mich., and Stiegel Brewery in Austria.

In 2011, the owner spearheaded the effort to change a Prohibition-era statute that barred production breweries from selling their product on-site. That change, colloquially known as the "Surly Bill," led to the proliferation of craft breweries and taprooms across the Twin Cities. As a result, Surly had to increase its production capacity to meet demand and expand outside of the local market.

Objectives and Goals Set and Met

Surly's owners set out to create a building tied to the image of the company and its people, and also to connect customers to the brewery process and to one another while remaining authentic to Surly's purpose and place. Overall, the place had to exemplify the idea of a lean, mean brewing machine.

The owners hired a successful heavy-metal lead guitarist to head the brewery operations and branded the microbrews with names such as Furious, Cynic, Bender and Devil's Work. Sponsoring local artists for all its graphic work, Surly has garnered an edgy, dark and beautiful visual image on par with its microbrew names.

Another goal was to create a tourist destination brewery. Surly selected a location with easy access to public transportation, the University of Minnesota and freeways.

A third goal was to create a multiexperience facility, one that includes a brewery, beer garden, beer hall, private beer hall and fine dining. In order to provide food to complement beer offerings and encourage guests to extend their stay, the project features a central kitchen with the capacity to produce many types and quantities of food.

One of the most critical challenges for this project was simultaneously bringing together brewing, hospitality and

Brewer’s Table offers traditional table seating, as well as seating in front of the cookline and at the bar. Photos courtesy of Rippe Associates; photography by Corey Gafferfoodservice while separating them from each other for functional optimization. Foodservice at two levels is concentrated on the north side of the facility with a dedicated loading dock separate from brewing operations. From the main kitchen, serving internally is directed south toward the beer all on the main level and restaurant on the second level while service to the garden on the west is provided at the exterior of the building from a walk-up counter. Loading for all foodservices is on the east.

Located on the boundary between Minneapolis and Saint Paul, Surly was built on a brownfield site. Methane gas was escaping from the soil. Therefore, a membrane floor — a structural concrete slab with continuous ventilation — became necessary. All the drains had to be located before the slab was poured because no penetrations would be possible afterwards. Only drains were run below the floor, and all other utilities were run overhead.

Since there was limited space on-site, the designers' equipment layout minimized the space for storage in order to give the maximum amount of space to food prep and serving.

In order to offer food diversity, the kitchen had to be able to produce various menus. The menu for the beer hall is relatively simple with brats, burgers, flatbreads, and meat and cheese boards. Following the original kitchen design, Surly hired a talented chef and team so the menu for the beer hall and more upscale Brewer's Table became more sophisticated, necessitating changes to the kitchen before opening.

To present Surly's core products in the best possible light, much effort was put into making sure the beer was the appropriate temperature, had the proper amount of carbonation and flowed in high enough volume. Almost as much attention was paid to the glassware for the beer. It is washed with the ECA water and rinsed with filtered water. In addition the glassware is again rinsed with filtered water just before filling.

Ingredients flow from the loading dock, where they are checked in by the receiving person and move through the 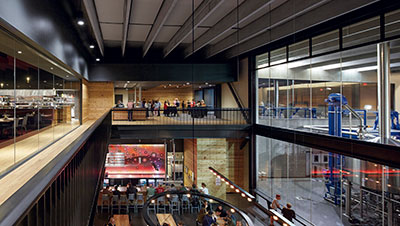 Brewer’s Table offers traditional table seating, as well as seating in front of the cookline and at the bar. Photos courtesy of Rippe Associates; photography by Corey Gaffercentral kitchen corridor and into the storage areas. From the storage areas food flows perpendicularly to the prep areas and then continues to the à la carte cooking areas. The servers pick up the food in the service window and deliver it to customers in the beer hall or the beer garden.

Due to its limited size, designers worked hard to reduce circulation in the kitchen, centering on one main corridor and perpendicular cross aisles. Cold and hot prep for all four venues occurs in the same area. The only cooking outside of the main kitchen is in the restaurant and is limited to finish cooking.

"Looking back, there were no 'slow days,' particularly in the beer hall, so it was important that we didn't value engineer any of the hot prep and finish cooking equipment because this equipment is always fully utilized," says Steve Carlson, FCSI, LEED AP, president, Rippe Associates. "The smoker was included for a few menu items, but smoked items have been a big part of the menu. The kitchen staff had never used a combi oven before, but after they got used to it, now it is indispensable."

In addition, kitchen staff appreciate that all the equipment was brand new, heavy duty and ready for the volume. They believe the removable polymer shelves for the refrigerator were worth the additional cost since the walk-ins can be kept cleaner.

The project followed LEED guidelines for the site and building. The design team also worked with the Weidt Group and Xcel Energy to define and implement a host of energy conservation strategies that achieve approximately $15,200 in annual cost savings with a 1.9-year payback.

Among the project's many "green" features are the connection to multiple modes of mass and alternate transit and proximity to the downtown areas of both Minneapolis and Saint Paul. Additionally, the brewery replaced a brownfield industrial site that had become a magnet for graffiti and dumping. Existing site contamination was remediated, and a majority of materials from the existing foundations were salvaged in place, recycled and incorporated into the landscape design. The facility has transformed the existing urban site into a community amenity featuring gardens and gathering areas, retail, entertainment and employment. As the first regenerative "greening" project in the neighborhood, Surly Brewing MSP serves as the catalyst for future sustainable and economic development.

Other sustainable features of the building include:

Sustainable features of the foodservice equipment include:

The project has met all the projections in terms of revenue and customer traffic, exceeding 5,000 people per weekend day. More important, while beer is the focus, the facility attracts as many families as hard-core beer enthusiasts. The most popular beers are the Helles-style lager, approachable to all beer drinkers, followed by Todd the Axe Man, a West Coast–style IPA for the true craft beer lover.

The multiple venues offer customers varied experiences and reasons to come back to try the other areas. It has become a destination nationally and internationally. Some days there are more out-of-state or international identification cards shown than Minnesota driver's licenses.

This business level has allowed the Brewery to employ a great group of talented staff. "One of the main goals of the project was to strengthen the connection to the Surly brand," Carlson says. "This building has given a physical presence to the brand. From the day the facility opened, the customer has owned the space. It's common to see a customer knowingly leading a group of friends on a tour of the public areas. You see people standing in the beer hall with the look on their face that they are at home in their neighborhood place, along with 400 others. The craft beer fans come for the beer and come back for the charcuterie and pretzels, and the latest beers, of course. The foodies come for the Brewer's Table and discover that beer can be as interesting as wine. Customers bring their out-of-town friends since it's a must-see stop, and next week they come back on their own."