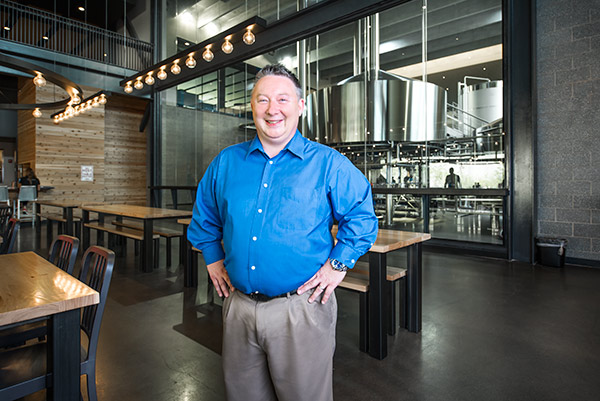 Troy Jacobsen at Surly Brewery. Photo by Joe Treleven.They call him the "Bid Boy." Or "Legs" on sillier days "because of my tall stature," Hockenbergs' Troy Jacobsen says sarcastically.

As the lead contract salesman for the FE&S' 2007 Dealer of the Year's office in Eagan, Minn., Jacobsen's job consists of 80 percent bid work, 75 percent of which comes from public school projects spanning 30 to 40 districts. Since becoming part of the Hockenbergs family in 2000, he now racks in a solid $4 million to $6 million per year for the company (the reason, he kids, for his graying hair at the age of 43).

But it's easy to work this hard when you love whattyou do. An experienced restaurant chef who holds a degree in manufacturing engineering management, Jacobsen combines the best of both his skills and passions, selling everything from "tongs to combi ovens" for his wide range of customers, which goes beyond schools to include stadiums, university dining facilities and commissaries, casinos, churches, restaurants and even a craft brewery.

Loyal customers appreciate his responsiveness and humble, easygoing and friendly but get-it-done disposition. Hockenbergs' owners, the Schracks, view him as a solid worker with integrity, honesty and excellent follow-through. For this and many other reasons, FE&S named Jacobsen its 2015 DSR of the year.

Working on an impressive 10 to 20 projects at one time, Jacobsen has become more of a highly organized project manager and task juggler rather than a street salesman, though he checks in on clients regularly.

Jacobsen starts each day in the office at around 6:30 a.m., going through emails, marking up his whiteboard with deadlines and tasks, and otherwise catching up on agendas and things that need to get done. Jacobsen relies heavily on his tablet, which features a full keyboard and note-taking device and allows him to review documents and drafts, take notes and email important materials back and forth. He is so organized, he double-checks the emails on his tablet already sent to his computer at work so he's sure not to miss anything.

"These days, it's so important to stay on top of things and to stay ahead of the game with technology," says Jacobsen. "You just have to — otherwise I would be driving around with messy blueprints and catalogues all over the place."

He'll spend most of his time at the office when he's not out at construction meetings or conducting local site visits. Project managers Dan Tran and Travis Steinke help Jacobsen by filling quotes, keeping track of deadlines and relaying phone calls from clients, architects and other project team players while he is on the road. Together, the team will double- and triple-check all the specs and documents just so they can be sure they're not making any mistakes. In this age of tightening budgets, time and margins, those details can't be compromised.

"This is busy season," Jacobsen said last month of his current workload. In other words, kids are out of school, and it's construction season. Selling everything from smallwares to major equipment pieces and even occasionally assisting with the design management, it's no wonder this full-service dealer sales rep brings in as much revenue as he does.

Bid work poses a different set of challenges for DSRs compared to other types of projects, not only because of the need to serve as a liaison among multiple project players, but because of the sheer amount of paperwork required by the need for bid bonds, city oversight and even affirmative action hiring processes.

Bid work also requires uncanny attention to detail, something Jacobsen clearly possesses. "I read through all the specs several times whether I like to or not to make sure there are no mistakes on other people's end and on ours," he says. "You don't want to put the wrong model number in or go too low in margin and screw up a million-dollar job. I'd rather go in high and be safe than go too low and miss things."

He's referring to a recent project where another bidder won out by a $100,000 difference, for which the company later had to pay because of a mistake in the paperwork. "You can type a 6 instead of a 9 and have big problems," he says.

Jacobsen has to carefully review four sets of drawings, including foodservice floor plans, plumbing, electrical and special conditions documents, sending them out to the contractor, consultant and architect for approval and reviews, ordering the equipment, and working around the general contractor's installation schedule. And the job doesn't end there. Jacobsen always makes sure the equipment is properly installed and conducts regular follow-ups — the latter being a huge reason why his clients are always happy.

Though the majority of Jacobsen's work revolves around contracts, he has extremely loyal customers in the private sector, which we'll get to. And what start out as bid projects often lead to repeat business down the line (the University of Minnesota, for example).

One of Jacobsen's prides and joys was working on the TCF Bank Stadium, now home of the University of Minnesota Golden Gophers football team and the temporary home of the National Football League's Vikings while their new stadium gets built. Up until 2009 when the stadium opened, the Gophers had played off-site at the Vikings' old stadium, the Metrodome. It took nearly 10 years for the TCF Bank Stadium proposal and project to come to fruition.

"I worked on that project for two-plus years," says Jacobsen, who in addition to supplying all the equipment, oversaw all the design and CAD work on the TCF project. Since then, he has been hired for additional contract and stadium projects with the University of Minnesota and other nearby institutions as a result of his hard work.

This includes the new baseball stadium, CHS Field, which opened in May of this year in downtown St. Paul and is the new home of the St. Paul Saints and Hamline University baseball teams. Jacobsen had worked on the project since the fourth quarter of 2013, serving as the foodservice designer and supplier.

Getting Jacobsen on board "was a win-win for the entire project team," explains Mark Maghrak, team leader for Ryan Companies US, Inc. "As the design-builder for the ballpark, we knew it was critical to get the foodservice subcontractor identified as early in the process as possible. Troy was very patient as Levy/PSC worked with the Saints to establish menu selections that would drive the six different concession stands, main kitchen commissary, vendor/hawker commissary, club kitchen, and six portable concession locations. Troy coordinated between our architect, mechanical and electrical design-builders, and Levy to reconfigure each location based on a specific menu and planned business operation. This included changing layouts and equipment, updating costs to stay within budget, and communicating with all parties involved (including the Saints) to keep everyone on the same page. Troy was very responsive to emails, phone calls, and impromptu meetings to help facilitate the process and keep design moving forward."

According to Maghrak, at one point Levy and the Saints wanted to have a smoker in the project and struggled with using an outdoor model versus an indoor one. After reviewing the pros and cons, Troy was able to select the proper piece of equipment and make sure everything was up to code and that all the equipment submittals and plans were in sync and all gas, water and electric hook-ups coordinated. Jacobsen even managed the beer line installation, something he later found handy when working with local craft brew distillery Surly (more on that later).

But Jacobsen didn't spell all that out for me, even when I was asking deeper questions. That tells me one thing: he's just a humble guy who likes to work and do a good job. "I'm not afraid of work — it's important," he later tells me, nonchalantly.

The ability to help the operator find the right smoker in this case also sheds light on Jacobsen's strong culinary background and his ability to know what cooks need. Turns out he loves his own smoker at home — making dishes like spice-rubbed rack of lamb, pork shoulder and other delicacies for his wife Andrea.

From Rochester to Restaurants

Jacobsen's background in restaurants began in high school when he started washing dishes and later cooking in the kitchen at a local supper club. This was the classic mom-and-pop type of place where you bring the ingredients for Old Fashioned cocktails, the staff mixes drinks for you, and you eat fried fish on Fridays and prime rib on Saturdays.

It was a small lake community, where Jacobsen grew up, right on Lake Zumbro, 15 miles outside of Rochester. As a young person there you could work in foodservice or work on a farm, so he did both. Or perhaps he could have worked at "a little hospital in Rochester called the Mayo Clinic," Jacobsen smiles, where his father worked as a surgical tech assistant.

"Oh, you betcha," this Midwesterner says, adding to the fun. But all joking aside, this is the type of God's country where you snowmobile to work and "you want to make sure you have at least 14 inches of ice and are comfortable with some cracking when you drive across the lake," says Jacobsen. "Some folks would leave their door open while driving across, you know, so they can get out fast."