Nearly 40 percent of incoming UCLA freshmen in the 2010-2011 school year were Asian or Pacific Islanders, a core demographic that Peter Angelis, assistant vice chancellor for housing and hospitality services, felt wasn't being adequately served by the school's foodservice program. Students could always choose from a handful of Asian fusion dishes, but they weren't the authentic, home-style foods that those students craved and that so many others raised in culturally diverse Southern California were used to eating in the area's many ethnic restaurants. 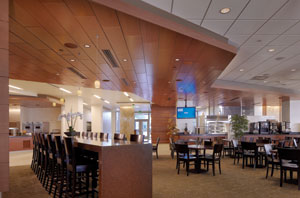 Believed to be the first and only authentic Pan-Asian campus dining facility in the nation, FEAST at Rieber focuses on seven distinct Asian cuisines — Korean, Japanese, Chinese, Indian, Thai, Vietnamese and Hawaiian — with rotating menus that showcase two of the seven cuisines each day. The foodservice team goes to great lengths to ensure authenticity of ingredients, preparation and presentation, and even goes so far as to train staff members to greet patrons in the traditional languages of the featured locales. It's part of what Ansel says is not just a food-oriented concept, but a concept centered on education and building cross-cultural awareness, as well.

Designed to match well-traveled, food-savvy UCLA students' expectations for both variety and authenticity, FEAST offers an array of interactive stations where staff make or finish to order menu items. Stations include Bruin Bowl, for stir-fry, noodle, curry and fried rice dishes; Spice Kitchen, for sushi, spring rolls, dumplings, special sandwiches and salads; Iron Grill, for specialty sandwiches, burgers and fries; Stone Oven, for Asian-themed pizzas and flatbreads; Greens 'N More, for traditional soups, hot sides, salads and condiments; Sweets, for desserts; and Beverages. LCD menu boards above the stations give patrons all the information they need to make their selections. "That was a big innovation for us and it's very popular," Ansel notes. "We're able to give a full description of the dishes, including ingredients and basic nutritional information. It's linked to our recipe database so the information is fed automatically to the menu screens."

Sample items from a menu where Indian and Vietnamese were the showcase cuisines include selections such as Bhindi okra, curry bao, tandoori lamb burgers and cassava fries, chicken tika masala flatbread, seafood pancake with calrose rice, calpico yogurt drink, and, for dessert, basil seeds with passion fruit jelly. UCLA Executive Chef Roger Pigossi says student input and feedback ultimately led the culinary team to commit to and follow through on delivering such a high degree of authenticity. "Originally, we thought we'd do Asian fusion, which would have been just turning the dial on some of the things we were already doing — maybe using some Asian flavors and spices but not really trying to do real Asian food. Where it really turned is when we got the students involved in the dialog. It became very clear that what they wanted was a wide variety of real, authentic Asian food. They were familiar with it, it was something that was comforting to them and we weren't offering it."

The challenges involved in producing truly authentic Asian foods were daunting, particularly when it came to specialty ingredient sourcing and staff training. "The deeper into it we got, the deeper the challenges were," Ansel says. "It was intimidating for our employees, and finding the right ingredients and specialty suppliers took some time. For authenticity, you have to have the right ingredients. But we have a very talented job bank to draw from here and it was a very exciting undertaking. It really honed our R&D skills. We did a lot of team field trips to markets and restaurants both to do menu research and to get leads on suppliers. Fortunately, in L.A. we have a lot of great authentic Asian food resources. Slowly but surely we got comfortable with it and developed the expertise."

While menus and recipes were being developed, the outdated Rieber dining hall was transformed into a warm, contemporary, high-tech Asian restaurant. The roughly 20,000-square-foot, 600-seat space was almost completely gutted but most of the changes were aesthetic, according to Craig St. Louis, associate director of operations. "There were some changes to the equipment lineup, but not as much as you might think," he said. "We did have to move some floor drains, rearrange things and bring in new hoods and rice cookers, but much of what we were already using was transferrable."

"Keeping up with cooking more than 400 pounds of raw rice, including several different kinds, is a challenge we continue to seek better solutions for," adds Alex Macias, assistant director of operations who oversees FEAST. "We also needed high-powered units for our wok line and, working with a manufacturer, we custom-designed our Spice Kitchen cooking suite. It's a beautiful platform because it allows us the capability of using many different cooking methods. We have induction, wok, flat top, salamander, ovens — it's a self-sustained platform and gives us incredible versatility."

Based heavily on a menu where staff cook or finish items to order in the front of the house, which is typical at all UCLA residential restaurants, FEAST features a comparatively small back kitchen, consuming just 15 percent to 20 percent of the facility's total space. Through the preparation of bulk items, the university's central production kitchen supports FEAST's back-of–the-house operations. "Almost everything that's started at the commissary is finished in the kitchen or front-of–the-house location but the commissary enables us to do things in large quantity thanks to equipment like cook-chill, encrusting and extruding, and pressurized tumblers," Ansel says.

Though the staff continues to tweak and smooth out operations, FEAST at Rieber is an unqualified success so far. It draws an average of 38,000 guests per month compared to slightly less than the 12,000 who patronized the old Rieber dining hall. Monthly revenue has risen from $142,299 in the old space to nearly $500,000. UCLA projects FEAST's operating profits will be in excess of $1 million in 12 months. "We're looking at payback in just under five years," Ansel says. "We're very happy with that, but we're happier to have really listened to what our students were saying and created something unique that meets their needs so well."