Referred to by students and staff alike as the cement bunker, the once state-of-the-art Gordon Commons dining hall on the University of Wisconsin-Madison campus was clearly past its prime. Built in 1965 to serve as the primary dining facility for some 3,000 students housed in nearby residence halls, as well as the school's central commissary, Gordon was stodgy, old school and out of step with the UW's progressive, competitive flagship Big Ten campus atmosphere. Despite efforts over the years to keep up appearances, it was campus foodservice at its most stereotypical. 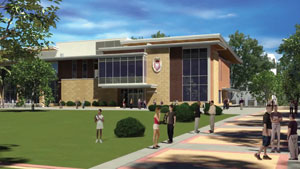 But that's all history now. This month the UW Dining and Culinary Services team wraps a from-the-ground-up rebuild of the facility that promises to knock the socks off of students and staff returning in the fall. Next to the old Gordon Commons, which is being demolished and transformed into 55,000 square feet of recreation/green space, they'll find the highly stylized, on-trend Gordon Dining and Event Center designed to meet their increasingly sophisticated culinary tastes and convenience-driven lifestyles. It's the larger of two major dining facilities projects being completed this summer, the second being a residence hall with on-site dining on the opposite end of campus.

Situated in the heart of the UW's Southeast campus neighborhood, the $34.1 million, 99,000-square-foot Gordon project features 13 diverse à la carte dining venues in the new ground-level Gordon Avenue Market. Each offers freshly made or finished-to-order specialties ranging from customized pizzas (by the slice or the pie for dine-in, carryout or delivery to nearby dorms) at Capital City Pizza Company, to build-your-own salads at Great Greens, to a broad array of international specialties at Global Kitchen. At Delicious, guests can build their own sandwiches, paninis, subs and wraps, and at Egg Cetera enjoy made-to-order omelets and breakfast sandwiches, hot cereals, breakfast meats and potatoes, and a rotating selection of pancakes, French toast, quiche and other breakfast specialties. Not in the mood for a hot breakfast? The Cereal Bar offers up to 30 varieties of cold cereal as well as oatmeal and a yogurt bar with toppings.

The concepts were developed in-house and while a few have been featured in some iteration in other campus dining halls, they all sport exciting upgrades in the new Gordon. "Of course, we've offered pizza since the beginning of time but in the new facility it's baked in a stone hearth oven versus a conveyor oven. It enhances the quality and is also an impressive design feature that guests see when they walk in the door. Similar upgrades have been made in all of the concepts that offer familiar menu items," says Julie Luke, assistant director of dining and culinary services. "The preparation, presentation and the level of customization available are very different."

"The whole marketplace concept is much more conducive to what our residents think," adds Joie Schoonover, director of dining and culinary services. "We've offered many similar food items in the old Gordon and in other venues, but we could only offer one of those at a time or we've always had multiple entrees and a kind of grill station, but it wasn't prepared in front of the customer. The back-of-the-house in the new Gordon is relatively small because everything's been brought out front. That's a big change that the students will see — everything is now prepared for them in front of them."

Three separate dining areas within the new facility provide seating for 600 and guests can also relax in a spacious fireplace lounge or second-floor balcony gathering space overlooking the dining areas. Floor-to-ceiling windows offer views of the nearby Kohl Center arena and residence halls, and upper-level event space includes a meeting room that can seat 300 as well as three additional 250-seat rooms that can be opened into one large room that seats 750. A separate formal dining/meeting room accommodates 20 guests. Dining and Culinary Services offices, as well as a new central production kitchen and a large loading dock comprise the building's lower level.

Indeed, while the students are sure to be excited about the diversity, freshness and marketplace vibe of the new facility, the UW Dining and Culinary Services staff are equally excited about less sexy aspects of the building. "One of our main goals was to get more meeting space," Luke says. "We've struggled for a long time with that and have had to go off-site for any big catering functions. We're excited about having the ability to seat 750 banquet-style upstairs, as well as another 300 here in a combined dining and event center space."

The other big plus the new facility brings to campus dining operations is even more out of sight, the lower-level production kitchen. While the old Gordon Commons did have a commissary kitchen that produced baked goods, cold foods, casseroles, and did miscellaneous prep for assembly, the cavernous new kitchen has cook-chill capability that Schoonover says means big changes to production processes and her department's ability to offer greater menu variety.

"We have two 100-gallon kettles and two 80-gallon kettles there. Previously, we had kettles of similar size, but we weren't able to produce food that we could hold for a long period of time. It had to be served within a day or so," she says. "With cook-chill, we're able to hold it for up to 30 days, which gives us much greater ability to diversify our menus. While this part of the facility won't be obvious to students, what will quickly become more obvious is that our menu can vary from dining room to dining room pretty effortlessly on the part of staff. Right now, in order for us to have different menus it means that we have to produce things totally separate, from the standpoint that we may have 20 things that we're trying to produce today and we want them to all be the same place to place because of the production methods. Going forward with cook-chill, we're able to vary that menu and not have to vary the production because of the ability to hold foods significantly longer. Residents can select the broccoli and cheese soup today and see it the day after tomorrow at another venue on campus rather than having to wait another month for it to come around on the cycle menu."

In addition to cook-chill capability, another new feature designed into both the Gordon production kitchen and the new residence hall's production kitchen is an area designated for local produce receiving and processing. The school has highlighted local products for years and frequently features seasonal local food specials, but limited capacity to process those items has limited their use. "This new production kitchen feature makes it easier for us to use more local produce," Luke says. "It's a dedicated area where those products can be cleaned right off the dock. It's one of many aspects of the new facility that we're really excited about."