Even though it has been six years since Hurricane Katrina hit New Orleans, the region continues to deal with the devastation and is still in the midst of rebuilding efforts. After its 52,000-sq.ft. cook-chill facility was left completely underwater due to the epic storm, Sheriff Marlin Gusman of the Orleans Parish Sheriff's Office took temporary action to keep his operation running. 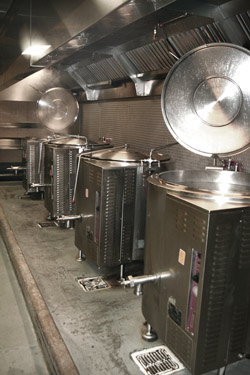 Large production capabilities tends to be a common trait among most correctional foodservice operations. Although it has been operating from a temporary facility since 2007, that is still the case for the New Orleans Parish Office’s correctional kitchen.

"Most of the Sheriff's office buildings were destroyed, with the exception of only three jails," says Major Jim Beach, director of food services for the Orleans Parish Sheriff's Office and vice president elect/treasurer at the Association of Correctional Foodservice Affiliates (ACFSA). "Most people deal with emergencies on one front. My home was destroyed, and then I was faced with the destruction at work. There was no escaping it."

It took some time after the storm to get this cook-chill operation back up and running. To improvise until a new facility could be created, Gusman made the decision to gut the kitchen and create an intake and processing facility. A temporary 5,000-sq.ft. kitchen was then created on one side of the warehouse, which was still in operation. Since 2007, each day this makeshift operation has served 3,000 to 3,400 inmates in five jails. That's roughly half the population the previous facility used to serve.

The responsibilities of the Orleans Parish Sheriff include care, custody and control of all New Orleans inmates; operation of the city's booking and receiving facility; security for the Criminal District Court; and service of the subpoenas for three different court systems. "FEMA helped fund a renovation of the house of detention kitchen," Beach says. "We went from the Jetsons to the Flintstones in terms of our kitchen operations. It is a very small area but was the only space available at the time."

Although there were numerous difficulties involved in changing over from a state-of-the-art kitchen to the bare bones back of house, Beach and his staff improvised, adapted and overcame their many challenges. Beach's efforts were recognized in 2010 by the International Foodservice Manufacturers Association (IFMA), which honored him with a Silver Plate Award in the specialty foodservices category for his accomplishments in "spearheading exceptional operations and exhibiting grace under pressure in a challenging environment."

In March of 2010, after a year of paperwork and funding from FEMA, construction began on the Orleans Parish Sheriff's Office's new correctional complex. Scheduled for completion in early May of 2012, the new building is down the street from where the former cook-chill operation was located prior to the storm. The $89 million facility will include an $8 million, 163,885-sq. ft., three-story kitchen/warehouse facility.

"Cook-chill is more efficient, so there was no question we would recreate that operation," Beach says. "It is the most effective way to serve food in large numbers."

With this new design, the first floor will be the main warehouse for the entire operation; the second floor will serve as the kitchen and its warehouse; and the top floor will contain the plant for the kitchen complex, housing generators, chillers and so on. The kitchen will be able to serve more than 25,000 meals in a 12- to 14-hour period. The facility will also preserve prepared meals in its freezer for up to 45 days.

Before Katrina, the jail had unlimited menu capabilities. With the temporary kitchen, this is no longer the case. To cope with the limited resources, convenience foods, such as precooked hamburger patties, are part of the menu a couple of days each week. "Still, 99 percent of our food is made from scratch," Beach says.

Menu staples include a riblet sandwich, beef stew and spaghetti. Mondays' red beans and rice is "almost a religion" at the jail. The breakfast menu will feature some of the biggest changes with the new kitchen.

"The morning menu will completely change," Beach says. "Now we can only provide hard-boiled eggs. After the new facility is finished, we will again be able to offer scrambled eggs, pancakes and french toast. Right now, we can't keep this type of food hot."

Although the food receives rave reviews from inmates, the small portions are not always appreciated.

When purchasing this equipment for the new kitchen, the most important factor is safety. "Offenders and inmates can take traditional equipment apart and use it as a weapon or tool," Beach says. As a result, operators in this segment must take numerous precautions.

For example, the knives in correction facilities are tethered to tables with 3-ft. leashes. Potentially hazardous equipment is secured in equipment lockers at the end of the day. Inmates also tend to hide contraband in equipment. Even dish machines, which generate a great deal of moisture and heat, have been used to make alcohol.

"I had a guy come in to sell me a plate 20 years ago. He guaranteed it was unbreakable, so I asked an inmate to come in and test it. He used the door to slam the plate, and it broke in half," Beach says. "Inmates are very hard on our equipment, so we tend to replace units more often than other segments of the foodservice industry."

The kettle for the new facility is the fourth Beach has had to replace.

At press time, the new kitchen's walls and floors were completed as well as the top floor of the elevator shaft. "The main goal was to get the kitchen rebuilt like the one we had and get it done as fast as possible," Beach says.

It looks like, after seven long years, this goal is about to be met.