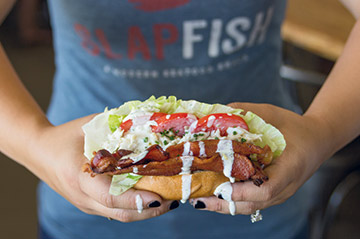 Slapfish is a pioneering, chef-driven fast-casual concept out to fill the gap between fine dining and QSR for seafood. Its menus tout sustainability, creativity and craveability, with cooked-to-order specials such as the Crab BLT. Photos courtesy of SlapfishAt time in the industry when the fast-casual operating model applies to everything from burgers, burritos and pizza to Mediterranean and Indian specialties, seafood has been conspicuously absent from the menu. Andrew Gruel, a young celebrity chef with a passion for the ocean and all of its bounty, set out to change that with Slapfish.

Gruel launched Slapfish in 2011 in a rehabbed food truck in Orange County, Calif., with two menu items: Lobsticles (lobster tails on a stick) and fish tacos. Within a year, he had three food trucks cruising the LA/Orange County market and enough confirmation of the public's appetite for fast-casual seafood that he scraped together $150,000 from friends, family and other debtors to open his first brick-and-mortar Slapfish. Housed in a former bagel shop in Huntington Beach, Calif., it's a location that Gruel describes as off the beaten path and a bit of a hole in the wall. But that was fine with him — and the only economically viable way for him to launch the concept. His focus now, as then, centers on freshness and quality. The concept maintains a casual, "nothin' fancy" seafood-shack vibe.

The concept remains ready to grow. The brand touts nine units, all but one of which reside in Southern California. Two are company owned and the rest are franchised. The chain's sole out-of-state location as of mid-summer resides in Lehi, Utah, although in July, the company sealed a multi-unit franchise deal for the East Coast that will place units in the Northern Virginia market.

Owned and operated by HN Capital, a private equity and real estate development firm with a number of marquee fast-casual brands in its portfolio, it's the first of what Gruel expects to be a wave of franchisee-developed units over the next year by HN and other new franchisee partners.

"Realistically, we should have 25 units open by the end of 2018," Gruel says. "And we have more than 100 in some stage of development. In addition to California, expansion markets include Idaho, Arizona, Colorado, Nevada, Texas and New Mexico. We've recently signed deals for two units in the Albuquerque market, one of which is set to open soon. Internationally, we have agreements in place to take the concept to South Korea and the United Kingdom as well." 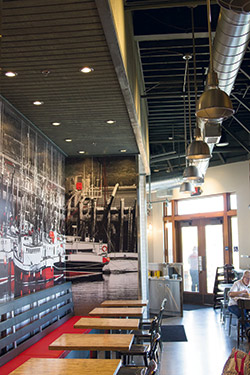 Billed as a modern American seafood shack, Slapfish units are dressed down and comfortable. Currently at 9 units, the chain has 100-plus franchise deals in the works in the U.S., South Korea and the United Kingdom.With sustainable, boat-to-plate seafood at its core, the Slapfish menu features both set offerings and featured fresh-catch specialties. Gruel's approach to menu development has been to give creative spins to familiar dishes, touting the "taste and quality of fine dining with the cost and convenience of fast food."

"Consumers have traditionally had either white-tablecloth restaurant options or low-end, greasy fried seafood options," Gruel says. "There was really not much in between. We saw a great opportunity to tap into the fast-casual model with seafood and do it in a way that's a step down from fine dining but still creative and chef-driven."

One lesson Gruel learned early on was the need to strike the right balance between the more creative, higher-end style of cooking he naturally gravitates to as a fine-dining-trained chef and the type of casual, fun and comfortable foods that people crave on a daily basis. He's landed on a menu of signature dishes that range from Clobster (half crab, half lobster) Grilled Cheese, to Street Tacos with grilled or fried fish, Lobster Rolls, Chowder Fries topped with creamy chowder and bacon, and Baja Mahi Sandwich on brioche with fresh avocado, tomato, cabbage and salsa. Customers choosing the fresh-catch specials promoted via chalkboard menus updated daily can choose to have the featured fish griddled and served as a salad, sandwich or bowl.

House-made items include signature sauces such as Awesome Sauce (creamy and smoky chili), Jersey (creamy lemon herb) and Gremolata. Pickles are also house made and available chilled or fried.

Lobster, a prominent feature at Slapfish, arrives precooked and preprocessed from sustainably managed sources in Maine. Slapfish sources all fresh seafood direct from a carefully curated network of fisheries and cuts it in-house. Staff cook the dishes to order.

Gruel developed much of his supply network for Slapfish even before he launched the restaurant concept. At a time when he was between cooking positions, he directed a nonprofit project at the Aquarium of the Pacific in Long Beach, Calif. Called Seafood for the Future, the program sought to educate and build awareness of sustainability issues in the culinary community nationwide and to connect chefs with sustainable seafood sources.

"At Slapfish, we can tell you the fishing method and the vessel used to catch all of our seafood, which is flash-frozen at sea," Gruel says. "We cut out the middleman, so we know exactly what we're getting has comprehensive traceability."

A typical Slapfish unit's volume splits evenly between lunch and dinner. The chain offers online ordering in some locations, and takeout makes up about 30 percent of total revenues, according to Gruel. Some markets offer delivery and catering as well.

While Slapfish offers flexible store prototypes for locations that range from airports — one unit operates at Los Angeles International Airport — to food halls and other public areas, traditional stores range from 1,600 to 2,000 square feet with a roughly 60/40 front-/back-of-the-house split. Flattop griddles and fryers are the concept's workhorse pieces of equipment, Gruel says, and development costs typically average $1,000 per square foot.