Why Energy Efficiency Matters at Arby’s

After launching a multifaceted corporate responsibility initiative and new energy-saving steps four years ago, Arby’s saved more than $20 million and achieved its goal to reduce energy consumption by 15 percent by 2015. The sandwich chain has also achieved an 8.6 percent reduction in water consumption in its company-owned restaurants. 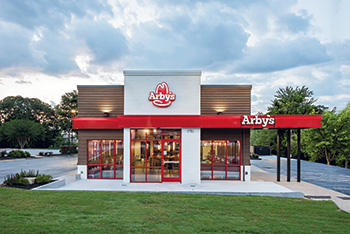 “In 2012 the industry was a little flat, and everyone was trying to find ways to cut costs,” says Frank Inoa, senior director of operations engineering, in explaining why the chain decided to make these energy-saving moves. “It was originally a cost-cutting initiative, and it evolved into its own platform. We spend a lot on utilities in our restaurants, and with more than 1,000 corporate-owned restaurants, even small savings at each restaurant add up to major savings to the bottom line.” The chain spends a whopping $28,000 to $35,000 for electric bills, $4,500 for gas and $4,500 for water — per year, per restaurant.

Arby’s is not alone in its efforts. In response to shrinking margins and growing expenses, many restaurant chains continue to track energy use with the intent of uncovering ways to lower consumption. Some chains, like Arby’s, work with an energy audit firm to first track overall energy use and establish baseline measurements and energy use behaviors.

“What they saw is that we needed a cultural change,” Inoa says. “We had to make a cultural shift in how we operate because energy is just not typically a focus when you’re running a restaurant that’s running 100 miles an hour. No one is focused on shutting off that extra toaster. You have habits you have to break. That’s one of the first observations they made and a very low-cost one.”

Arby’s introduced an on-off schedule with clear recommendations to the operators about when to shut off second ovens or third fryers based on each location’s volumes. “For the most part, that on-off schedule was tacked to someone’s bulletin board but not prominently viewed by our operators,” says Inoa. Instead the chain added stickers to the equipment and reminders throughout the restaurant to keep the schedule top of mind.

The energy audit also noted that the parking lot lights were constantly left on overnight, so new steps were taken to shut down all outdoor lights except one for safety. “When you know you’re doing something good for the community and the environment, people latch onto that,” says Inoa, who adds that none of the changes negatively impacted staff.

Another low-cost but significant change was surveying all restaurants for hot water heater temperatures. “We found the temperatures ranged from 135 degrees F to 185 degrees F and were all over the board,” says Inoa. “We didn’t establish temperatures across the board but simply asked our operators to lower the heaters by 10 degrees.”

That amounted to savings of about $300 to $500 per year, per restaurant, but that adds up over the course of 1,000 company stores. The addition of low-flow spray valves and aerators was also part of the initial 24-month simple payback plan for energy and water reductions. 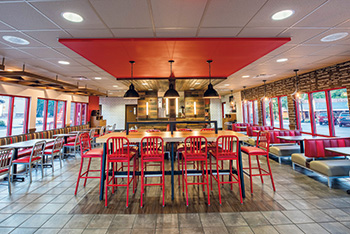 Arby’s opened 69 new restaurants and remodeled 179 in 2015.Arby’s has been able to reinvest the returns from its initial, low-cost initiatives to spend more on long-term projects that might cost more up front but yield even greater results over time.

This included implementing an energy management system, or an “asset management system,” as they call it, to continually audit energy usage and track other data at its stores. Part of the new system includes programmable thermostats with cool-down periods and some overall guidelines that can be overwritten by the operator on hotter or colder days.

The chain also replaced HVAC units, ovens and fryers with more energy-efficient models. During 2015, Arby’s opened 69 new restaurants system-wide including 60 new restaurants in the U.S. — the highest number since 2008. Arby’s also remodeled 179 restaurants across the system with these changes.

“We rolled out 386 high-efficiency rooftop HVAC units as part of the replacement program — the first time we have done this in our history,” says Inoa.

In addition, Arby’s rolled out a new cook-and-hold platform to save labor and energy costs as well as improve food yields. “Traditionally we would roast our beef in a convection oven and then transfer the product to a holding cabinet,” says Inoa. “Now, we cook and hold in the same cabinet that does not require gas or even a hood. We’re seeing the potential for energy savings above 60 percent in our stores.”

Fryers are more efficient now too. “Our new fryers not only save on oil usage, but also on gas consumption,” says Inoa. “They take less energy to heat 20 pounds less oil.”

“We are piggybacking on the Better Building Alliance’s goals to improve our operations and efficiencies,” says Inoa. “Now that we’ve been able to meet our first goal of a 15 percent energy reduction by 2015, we had to come up with another, challenging goal to reduce costs even further. In a restaurant you can only squeeze so many dollars out of the bottom line.” Arby’s is doing what it can to get there — and to do its part for the environment at the same time.