For Zak Dolezal, general manager and chef at Duke's Alehouse & Kitchen, an upscale yet casual gastropub in Crystal Lake, Ill., going green was as much a personal choice as a professional one. 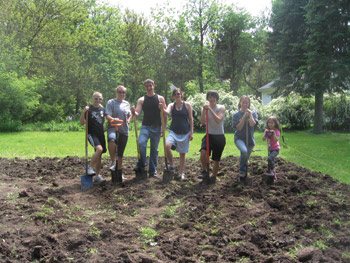 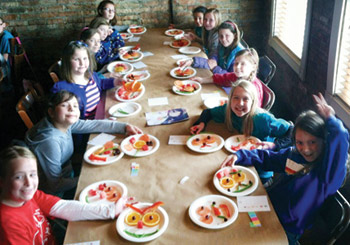 Duke’s Alehouse & Kitchen started a community garden (top). The garden also serves as a hands-on learning space for younger customers and other members of the community. Together with the kids’ classes (above), this helps build awareness of Duke’s sustainability-oriented mission and build awareness about the restaurant."Learning more and more about pollution, climate change and how the commercial raising of animals in this country impacts the environment has affected me to make changes in the food I source and serve," he says. "I want to protect quality, seasonal foods and make sure my kids understand what food is supposed to taste like."

Dolezal's father, Mark Dolezal, opened Duke O'Brien's in 1996 as an Irish pub. When Dolezal came on board six years ago after culinary school and staging in fine-dining kitchens in Chicago, he wanted to put more emphasis on the cuisine and offer more sustainable and local foods — at decent prices. The restaurant changed its name and branding in 2004.

Sourcing more sustainably produced food; managing water, waste and energy; and applying for green-related certifications have all had a positive impact on the growth of Duke's Alehouse. Just in the past few years, since earning the Green Restaurant Association's three-star certification, "restaurant sales have definitely gone up well over 100 percent," says Dolezal. Private events and banquet sales have also skyrocketed.

Dolezal first connected with the Green Restaurant Association (GRA) in 2008, and after some work updating the restaurant's practices to meet certification requirements, Duke's earned the second-to-top level right off the bat. In the dining room, a new draft system was put in place with state-of-the-art, temperature- and humidity-controlled coolers and a more efficient HVAC. Some fresh paint, new seating, 100 percent recycled paper table covers and eco-friendly paint also helped the restaurant become more environmentally friendly.

"The process comes with a cost, but we wanted to make sure we were doing everything we could so we could start with three stars," Dolezal says. "There was also a lot of terminology and sourcing of new products involved." Duke's also worked with the GRA to find more eco-friendly chemicals for its sanitization and postconsumer recycled products for to-go containers.

Dolezal says all the different initiatives — from the food to the messaging and the garden as well as the community and kids' classes — continue to help drive traffic and revenue growth for Duke's. Here's a closer look.

When it comes to the menu, Dolezal doesn't just say he sources from local and sustainable farms, he actually goes out to visit them. This allows him to get to know the farmers and buy as much as he can for both the main menu and to supplement the banquet program. "It's a combination of wanting to serve good food and taking care of the planet," says Dolezal, who began supporting local, small farmers after learning from Rick Bayless at Frontera Grill and Shawn McClain at Spring, a vegetarian-friendly restaurant in Chicago. "Ultimately it all comes full circle," he says of this modern food supply. "By protecting small farmers now we can have sustainable food — and a more protected planet later."

Taking the farm sourcing one step further, Dolezal chooses producers who also have a vested interest in land and energy conservation. "We started meeting farmers at farmers' markets and collecting from several different people, but now we have farmers growing more specific items for us so they have more a direct line to the restaurant," he says. For example, one farmer grows beets and squash specifically for the restaurant while others supply lettuces, apples and other fruits.

In addition, Dolezal started growing his own food two years ago, first in a neighbor's backyard and now by borrowing a half acre at a nearby farm. "This year we just built a community garden in our neighboring business's empty lot using raised beds," he says.

The community garden also serves as a hands-on learning space for their younger customers and community members. "We have a fruit and vegetable class for kids that has really taken off in popularity," says Dolezal. "The kids can get their hands dirty, learn about where food comes from and also have some fun." It's also a powerful marketing tool for the restaurant — which sees many more families come in as a result; and the parents can stay downstairs to eat while the kids take the class. Dolezal and his team have even taken the veggies to local schools to teach classes there.

Though he started with just a friend managing the beds, Dolezal has hired a more experienced gardener to help maintain them, growing tomatoes, squash, fresh herbs, kale and other greens, cucumbers and some varieties of beans.

A while back, Duke's also made a commitment to serving more vegetarian items at the restaurant — both to maintain its Earth- and animal-friendly philosophies and also as a competition differentiator to cater to those with special diets.

In fact, Duke's was one of the first restaurants in the Northern Chicagoland area to embrace Meatless Monday, a nationwide campaign to encourage people to eat a vegetarian diet for one full day. Advocates of Meatless Monday claim that reducing meat consumption can collectively help reduce the carbon footprint of commercial meat production in the U.S.

"Instead of just serving vegetarian items, we also discount all of these items at half price," says Dolezal, whose homemade veggie burger and polenta cake take top billing. "It's a popular day for us because it educates our guests and encourages people to eat a little less meat and focus on the environmental and social impacts of raising animals."

That's not to say Duke's is a vegetarian restaurant. Dolezal adopts a well-thought-out approach to proteins. He chooses grass-fed beef and favors chicken and eggs from nearby sustainable farms that don't use pesticides or antibiotics and that let their animals graze on pasture. Sustainably caught seafood is a must. And Dolezal extends the "local" concept to the bar with his craft beer and cocktail selection, which features many Midwestern brewers and distillers as well as fresh herbs from the garden.

Though these ingredients come at a premium, Dolezal finds that, with careful recipe costing and other money management, he can rationalize the costs and his guests will pay it — though prices aren't unreasonable. It can be hard to measure this impact in terms of ROI; but Dolezal has seen a clear increase in customer traffic, and qualitative analysis (especially verbal, social media and other feedback) has shown a growth in customer satisfaction since Duke's switched to higher-quality ingredients selected with a socially conscious focus.

"Going greener and getting local produce, meats, cheese and other products has brought in a different type of clientele willing to pay a premium, and they appreciate that we cater to people with dietary restrictions as well as vegans and vegetarians," he adds. "Being in the suburbs we can't charge as much, so we offset the cost of those premium items we use in the warmer months with more conventional items during the nongrowing season."

Dolezal thinks of it as having a niche and a leg up on competition. Stepping up gluten-free offerings and paying attention to allergens has also helped edge out other players.

Aside from the 100 indoor and 40 patio seats, Duke's runs a full-scale banquet and catering program for private events, serving up to 100 buffet style or 50 for seated dinners.

When buying new equipment, Dolezal makes sure to purchase energy-efficient models, but he finds that just keeping on-off schedules for equipment helps cut down on energy use even more. "We know how long it takes to heat up an oven and tell staff when they should be turned on for the shift," Dolezal says. "We've definitely noticed savings on our utility bill as a result."

In terms of managing waste, Duke's swapped out its dumpster for recycling and composting bins for both pre- and post-consumer waste, says Dolezal.

He admits the waste management process remains a challenge. "We're always finding ways to eliminate plastics as much as we can," Dolezal says, noting the restaurant switched from plastic wrap to lids (but that those are also still plastic). It's been easier to get the staff to wash lids versus sticky plastic in the middle of a busy shift, though.

"I think challenges with employee training is one of the main reasons other restaurants don't become as green," says Dolezal. "You don't pay workers very much to begin with and asking them to care enough to do those extra steps can be very difficult and continues to be a struggle for many restaurants."