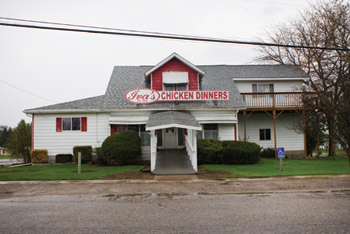 Open seasonally, Iva‚Äôs Chicken Dinners has operated out of its original farmhouse location since 1938."The guys working the oil wells needed a place to live and eat, so my great aunt Iva welcomed the workers into her old farmhouse and rented out rooms," says Kevin King, the restaurant's current owner. "The food was so good, everyone convinced her to turn the ground floor of the house into a restaurant. The rest is history."

King's parents took over and managed the restaurant in 1982, and then passed it on to their son, who purchased the thriving business in 2011 with his wife Natalee. King's two sisters also work at the restaurant. "My mom is still active in making the soup and pies in the morning," King says. "We're doing things the exact same way 76 years later."

Since the restaurant mainly serves tourists who have cottages up north, Iva's Chicken Dinners has become a seasonal business that operates March through October. "We have customers that come in weekly as well as those who visit two to four times a month," King says. "Our local clientele typically takes our food to go, and many people have been coming here since they were young."

FE&S spoke to King about the Iva's operation, including the menu and production process, which have remained the same since 1938.

FE&S: Can you talk a bit about the unique Iva's concept?

KK: We are simple, and our location and product have stayed the same throughout the years. We provide all-you-can-eat, family-style dinners, bringing everything to the table. This includes fried chicken, mashed potatoes, gravy, dressing, homemade biscuits, vegetables, cottage cheese, a relish dish and homemade chicken noodle soup. Along with our chicken, we are known for our unique coleslaw, which is made with a blend of vinegar and sugar.

FE&S: Your chicken-preparation methods have remained the same since Iva's opened its doors 76 years ago. Describe the process.

KK: Our chicken is dipped in flour, salt and pepper, so it's not an elaborate process. It is then fried in an iron skillet, which gives it a distinctive taste and quality. Thirteen pieces are fried at a time on demand. It is then steamed for about three minutes. The entire process takes between 20 and 25 minutes, so we bring our coleslaw out first, similar to a salad first course.

FE&S: You are known as a chicken restaurant, of course, but how have you accommodated those looking for other dishes?

KK: If there is a big group of people going out to eat, chances are at least one person will not want chicken. For this reason, our menu also includes other entr?©es, such as steak, chops and seafood. Still, 99 percent of what we serve is chicken. This makes preparation easier. We also offer stewed chicken, which is healthier than fried. However, we've found that most people will decide to splurge on the fried version.

FE&S: You've been in the same location since Iva's opened in 1938. Have there been any changes to update or expand the facility?

KK: We've added on three different kitchens over the years. Our location is now about 4,500 square feet, with 2,000 square feet allocated to the kitchen and the remainder to the dining area, which seats about 170. There also is a second floor, which is where my parents live.

FE&S: How does your equipment support the Iva's menu?

KK: We rely on a 14-burner gas stove that dates back to the 1950s. This is used to fry chicken using as many as 10 skillets at one time during our busy hours or for a catering event. We also steam the chicken in the skillets by dumping the oil and adding water. We utilize a convection oven for cooking dressing, biscuits and pies. Other equipment includes steam tables, two large walk-in cooler/freezers and two large reach-in refrigerators.

FE&S: It can be challenging operating a seasonal restaurant. How has business been lately?

KK: Our numbers have been way up in the last year. We have served about 3,000 more people this year compared with the year before. We also offer online vouchers that provide discounts. We believe our product is good enough to sell itself, even though the concept is real simple. People that come in once tend to come back again.