After 30 years in business, Bruegger's Bagels is poised to shake things up at its approximately 300 locations. A cobranding agreement with Minneapolis-based Caribou Coffee for its Minneapolis and Raleigh, N.C., sites was a natural evolution for two brands that were operating side by side in these markets. 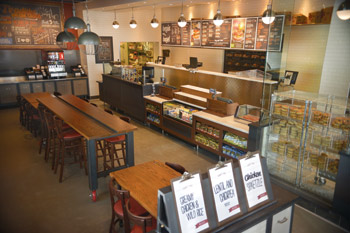 Bruegger's Bagels' strong presence in Minneapolis, Caribou's hometown, provided the perfect opportunity to test the cobranding effort. The two companies worked together to approve the initial designs, although they are still finalizing the aesthetic aspects. The goal is to make the new outlets look like a cohesive brand by incorporating both logos.

"We've been thrilled with the performance of our dual operations so far," Kadylak says. Currently, Bruegger's Bagels and Caribou operate three combined units, with locations in the Twin Cities and Raleigh. The companies plan to open additional bakeries later this year in Raleigh and Iowa as well as a Minneapolis location in the spring that will incorporate design elements of Bruegger's new prototype.

Unveiled in late January of this year and separate from the cobranding effort with Caribou, the new design capitalizes on Bruegger's identity as an authentic New York-style bagel bakery. "Our artisan style is a point of differentiation, and while many of our units offered views into our bakery, we didn't celebrate it," Kadylak says.

The new prototype uses a large glass window to separate the bakery from the dining room. The window serves a dual purpose, providing customers with an unobstructed view of the baking process.

Incorporating a full barista system represents another big change introduced by the new design. "While testing our cobranding with Caribou, we also tested how to develop our own coffeehouse concept," Kadylak says. "We feel having full-time baristas and espresso drinks will create another point of differentiation for Bruegger's."

Another departure from Bruegger's current operations is the new prototype's pay-first model. Previously, guests would order, and then staff would prepare the food; payment was received after the food was delivered. With the redesign moving the baking area to the front and the sandwich prep area to the back of house, the ordering process needed to adapt for added efficiency. "This is something new and different that we're testing," Kadylak says. "These days, guests have come to expect that they will pay first."

Moving the baking area to the front and changing the configuration and payment process also caused the seating area to shrink. "As a result, moving forward we will look for locations with more square footage than our typical 2,200 to 2,400 square feet to compensate," Kadylak says. "We're also planning to incorporate more bar seating and communal areas with sofas and chairs as opposed to booths and four tops that were utilized in the past."

In the new design, dark wood mixes with stainless steel and metal; and concrete floors, exposed painted ceilings and unique light fixtures are part of the equation. Focal points include an exposed brick wall and hand-drawn chalkboard menu boards. The new color palette is black, white, silver and red with splashes of orange throughout. "The focus is more on functional industrial chic," Kadylak says.

The kitchen, being on display, has a clean and open appearance that is flanked by white subway tile. With
Bruegger's Bagels adding fresh-cracked eggs to the system, the equipment package has been amended to include egg cookers and speed ovens. Another new addition is semiautomatic espresso machines. The core cookline also includes 40-gallon steam-jacketed kettles to boil bagels and deck ovens for baking them. Walk-in refrigerators and freezers store perishables.

"In terms of equipment, we seek units that are reliable and offer speed of service," Kadylak says.

Although the Bruegger's Bagels menu centers on its 15 to 20 bagel offerings, breakfast items, specifically egg sandwiches, represent the restaurant's biggest growth segment. Consequently, this is where the operation focuses its innovation efforts, with varieties including sriracha, chimichurri and Cajun egg sandwiches. "Innovative egg sandwiches and unique flavor profiles are driving our business," Kadylak says. The new prototypes are also experimenting with expanding smoked salmon selections, as these are a key component at New York bagel shops.

Addressing healthful eating trends, the focus remains on creating lower-calorie menu items. The chain offers skinny bagels, which are 200 calories, in addition to its traditional 300-calorie bagels. "We utilize a special tool to hand-cut out the middle part of the bagel," Kadylak says. "With this tool, we can adapt any type of bagel." Salads and soups, along with egg white options, also address this objective.

"The bakery café segment continues to grow, and with this new prototype, we're positioned well for growth," Kadylak says. "The process of how we make bagels is what we've always stayed true to because it keeps us relevant and separates us from the competition."