Although many would consider Murray's Restaurant in Minneapolis a steakhouse, third-generation co-owners and siblings Tim, Jill and James Murray stop short when it comes to this designation. 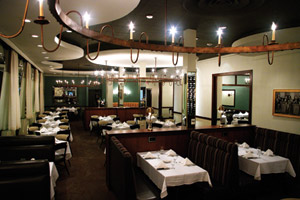 As part of a dining room renovation, Murray’s added booth seating. "We consider ourselves a fine-dining restaurant specializing in steak," says Tim Murray.

Murray's opened its doors in 1946 and still operates from the same location. The restaurant is not only well-known for its aged steaks, but also a diverse secondary menu and busy bar. "During the week, we predominantly serve professionals and those conducting business, while on the weekend, it's families celebrating birthdays and other events," Murray says. "It's a contrast between the midweek and weekend."

FE&S spoke with Tim Murray about recent changes to Murray's, what makes his operation unique and how the restaurant has thrived in the competitive steakhouse segment.

FE&S: Murray's has stood the test of time. What are recent changes that have been made to update your operation?

FE&S: Were there other changes to the décor that helped update the space?

TM: We changed our color scheme. It was formerly pink, and now it is teal. Also, the booth seating pattern was changed. There's more diversity in terms of the dining room's appearance, which has more of a modern look.

FE&S: Were there any changes to the back of house?

TM: Although we didn't renovate the kitchen layout, we did purchase new equipment. This included a couple of cook-and-hold ovens, since ours were very old, as well as a grill. But we didn't make any major changes, as the kitchen was not the focus of the renovation.

FE&S: What are Murray's best-selling and signature menu items?

TM: Our menu changes three times a year in late winter, summer and fall. More than 80 percent of what we sell is either beef or steak. Traditional items are offered year-round, although we may tweak them on occasion. Staple offerings include traditional cuts of steak, including filet, porterhouse and top sirloin. We specialize in 2 dinners for 2, which include a chateaubriand and the Silver Butter Knife Steak, which is a 28-ounce sirloin. Both are carved and plated at the guest's table. Other popular items are lamb chops, pork chops, chicken, walleye, salmon, lobster tail and pasta dishes that change every couple of months. Au gratin potatoes are our most popular side, in addition to traditional mashed potatoes, asparagus and a spaetzle dish. We offer seasonal vegetables as well.

FE&S: Describe your production process and back of house.

TM: Our steaks are aged for 30 days at a local meat plant. When we receive the meat, it's held for a couple days before being hand-cut and served. The broiler is custom-made in a larger size to handle our big steaks. The cookline also includes a six-burner sauté station, deep fryer and convection oven. The kitchen level includes two large walk-in coolers, while there are two others in the basement for storing produce and dairy items. We also have a few reach-in coolers and one stand-up freezer.

FE&S: What are the main attributes you look for when purchasing equipment?

TM: Much of the equipment we've had is more than 20 years old, including our grill and ovens.
It's important that units offer consistent results and are both durable and reliable. We can't afford to have equipment break down constantly.

FE&S: With consumers' increased focus on healthful eating, what challenges have arisen at Murray's?

TM: People's awareness of their salt intake and general health issues have become bigger factors in how they are eating. One particular challenge here stems from the way we season our meat, which we feel sets us apart. It's a unique seasoning that a small few consider too salty. Still, 99 percent of our customers prefer the unique taste of our steaks that is due to this seasoning. Even though more people are watching what they eat, there will always be people looking for good steak. People will eat healthy four or five nights out of the week, then not hesitate to visit a good steak restaurant.

FE&S: What does the future hold for Murray's, and how will you continue to persevere in this segment?

TM: We're always very conscious and cognizant of not becoming old and realize we have to keep refreshing our brand to keep it interesting, inviting and appealing. It's about the overall experience, and we are very aware that we can't rest on our laurels. Expanding may be in our future, but it would have to be the right situation.