The Hummus & Pita Co.: Authentic Dishes and a Growth-Mindset Kitchen

Dave Pesso and his family have been interested in the restaurant industry for most of their lives. Growing up in Brooklyn, Pesso started hanging out at the bagel shop down the street at just five years old. Every now and then, he would do an odd job at the shop or run a simple errand for the owner, who would give Pesso a few dollars for the help. By 12 he was bagging bagels and then, at 15, working the register.

His mother, Janice Axelrod, was interested in foodservice as well. A partner in a mortgage bank, she was part-owner in a handful of restaurants over the years. It wasn’t until the beginning of this decade, though, that the family truly became restaurateurs. 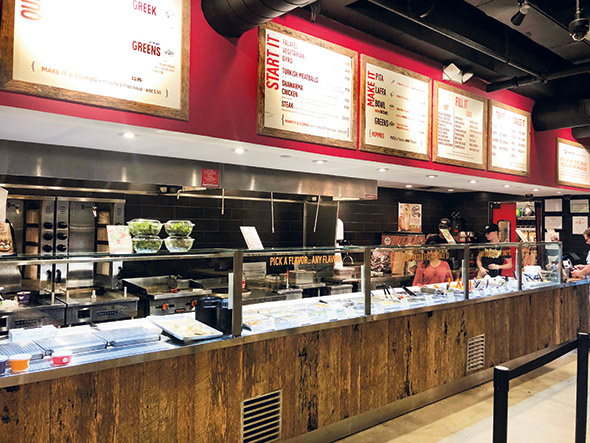 Just before the Great Recession, Axelrod sold her shares in the mortgage bank. She and Pesso, who worked there as well, helped the bank through the transition, but by 2011, it was time to move on. “The business wasn’t the same anymore,” says Pesso. “We wanted to do what our passion was and go into the food business, maybe become a franchisee.”

The family started by visiting franchise expos. After attending a few, though, they didn’t find a concept that really impressed them or felt like a fit.

Their decision: Start their own restaurant. “My mother said, ‘Now is the perfect time. Why don’t we do the food that we love, which is our food.’”

With that, The Hummus & Pita Co. was born.

As the concept’s name indicates, the menu features primarily Mediterranean/Middle Eastern cuisine. Axelrod has roots in Israel, while Pesso’s father is Greek. Growing up, then, Pesso remembers taking long trips to reach ethnic grocers, and eating hummus and pita, eggplant, lamb and falafel.

With Pesso’s family not limited to one specific country’s cuisine, he and Axelrod decided to do the same for their concept. This approach, says Pesso, allows the restaurant chain to appeal to as many people as possible.

“When people go for Greek food, they’ll go once every couple of months. The same for Turkish or Israeli or halal. We wanted to make something that someone could visit every day and feel that they’re not just going for Mediterranean or Middle Eastern food, but they are going for healthy and delicious food,” says Pesso.

This nonethnic approach to the food carries over to the restaurant’s design.That means, first and foremost, the restaurant doesn’t use ethnic design elements like decorative hookahs or pictures of Greek islands. Instead the design simply remains bright and clean, even corporate. 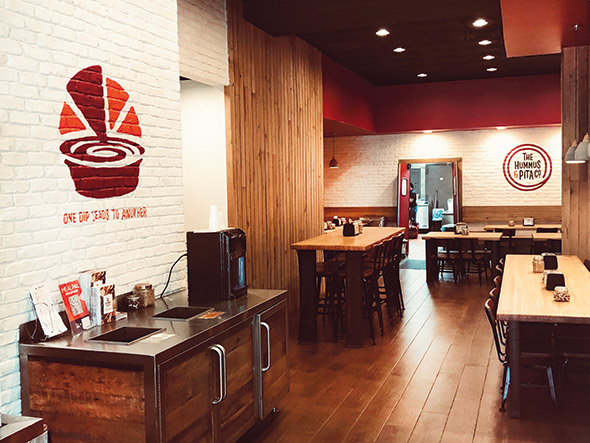 That was no accident. While the concept was started by a family that’s passionate about the food they know and love, its founders were never out to open a mom-and-pop restaurant. Developing a successful franchise was the plan from the beginning.

Natural, authentic materials fill the interior of the restaurant space. The dining area uses reclaimed wood tables in conjunction with chairs and banquettes, as well as some counter-height seating at the front window. Walls are brick, some painted white, with murals showcasing the restaurant’s logo and touting its food.

Like so many other fast-casual concepts, guests walk down the make line, seeing their options and making their choices as they go. The line itself has a polished appearance, with barnwood on the face and static menu boards against a red background.

These design choices, Pesso emphasizes, help give an individual restaurant the appearance and ambience of a scalable concept. “When we originally built the place, it was always in our mind to build it and have it look like there are hundreds of them. We wouldn’t want to look like the normal shawarma or falafel place.”

To get to the point of franchising, the founders always knew they’d need more than good food and a clean appearance. They’d need a partner. They weren’t looking for just an investor, says Pesso. They sought a group that could help guide them through the franchise process and help develop the operational processes and business practices necessary to be a successful franchisor. 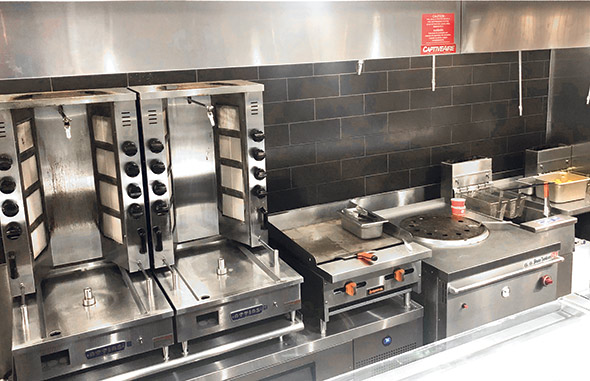 The hot line in the front of the house starts with two shawarma machines, followed by a 30-inch flattop, then a tabun oven.

“Going back to our visits at the franchise expos, a lot of franchisees’ main problems were they never got enough support from the franchisor. We knew that was something that we didn’t want to happen. We wanted to go a little top-heavy on support.”

They found the right partner, Pesso says, in Kitchen Fund, a New York-based investment company that specializes in emerging restaurant concepts. The firm, says Pesso, helped The Hummus & Pita Co. fine-tune practically all aspects of its business, from waste management to portion control to training processes to, yes, kitchen design.

In this realm, much of Kitchen Fund’s advice focused on selecting the right equipment. As relatively new operators, says Pesso, the chain’s leadership team didn’t have a firm grasp of the different manufacturer value propositions or the calculations that justify investing more on a higher-quality piece of equipment with lower maintenance and a longer life cycle.

The investment company also helped the chain make its kitchen design more efficient through the use of overhead shelving and more logical placement of equipment. “Before, it was spread out, and there was no real rhyme or reason. We want it to be as simple and convenient for our employees as possible,” says Pesso.

Much of the work to produce The Hummus & Pita Co.’s food takes place in the back-of-the-house kitchen, where staff make salads, sauces and dips in bulk. 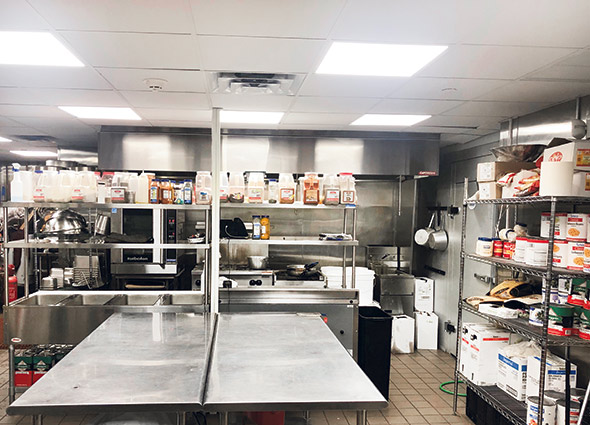 Prep begins at 7 a.m. each day with a single staffer who works until around 2 p.m., when enough food is prepped for the dinner hours, Pesso says. Much of this team member’s work focuses on breaking down produce from whole to the different cuts required for the chain’s recipes.

Each store has a cook and a cook’s assistant who make items like rice and couscous, different dips (including 10 types of hummus) and several salads.

The kitchen’s hot line starts with a convection oven — typically a single unit but sometimes a double-stack if demand warrants it. Here, staff roast veggies and bake pastries like baklava and Moroccan cookies.

Next to the convection oven sits a 28-inch gas-fired chargrill on casters, which is used exclusively to grill eggplant for baba ganoush. Another eggplant-focused unit comes next, in the form of a single fryer. The eggplant fried in this unit produces a Spanish eggplant dip, made with eggplant, tomatoes and seasonings.

Next comes a rangetop with six or eight burners, depending on the location. Here cooks boil chickpeas for hummus (day two of a three-day process for making hummus), make rice and other grains in bulk and more.

Notably, there’s no undercounter refrigeration on the hot line. Instead, team members store items in the restaurant’s walk-in cooler or 180 degrees away in two undercounter units with work surfaces, where prep staff and cooks do much of their work. A steam table separates these undercounter units and stores bulk hot items, such as the aforementioned couscous and rice.

Restocking food up front is practically a full-time job in and of itself, says Pesso. Like so many fast-casual operations, when an ingredient is running low up front, assembly line members use a telephone or intercom system to notify a co-worker in the back, who then fills a new pan or tray and brings it to the front.

“When you come to our line, it is vibrant and full, and it looks great. We never want it to look dry, like it’s been sitting out.

This guest-facing food display in the front starts with an insulated breadbox, which keeps pita and laffa warm. It’s at this spot that guests choose from four meats (lamb, chicken shawarma, chicken breast and steak), falafel or a non-falafel vegetarian option made with fillings like grilled vegetables, chickpea salad or hardboiled egg.

Alternatively, they can choose from one of four popular items on the restaurant’s express menu, with preselected toppings and fillings. Guests who order from this menu can then skip the assembly line and head straight to the cashier. This option, says Pesso, helps simplify the process for new customers or those in a hurry, while also improving throughput.

Following the breadbox are the various ingredients that guests can add to an order. A cold table with wells starts the lineup and displays the chain’s 10 hummus types. After that comes a steam table with rice, grilled vegetables, chicken breast, steak and more, followed by another cold table with various salads, dips and other cold items, such as tabbouleh, stuffed grape leaves and beet salad.

Toward the end of this guest-facing line sits a shake machine. Here staff make the concept’s proprietary Chickpea Chiller, a shake-like dessert item made with hummus, almond milk and fruit.

While the shake machine marks the end of the guest-facing assembly line, a front-of-the-house hot line sits on the back wall, just a 180-degree turn away. At the start of this line (directly across from the insulated bread box) are two vertical broilers (aka shawarma machines) used to cook chicken thighs and lamb. When guests order one of these proteins, a staffer turns around and slices it fresh. The machines sit on a large refrigerated base that runs nearly the entire length of the back wall.

Next to the shawarma machines is a 30-inch flattop and then a tabun oven, a close relative of the tandoor. These two pieces are used in concert, says Pesso. Raw chicken breast and steak (held in the refrigerated base) are placed on skewers and then cooked in the tabun. Both are then cut for use in the short term.

Since chicken takes 30 minutes to cook in the tabun (versus just 10 minutes for steak), the restaurant staff make extra breasts and store them whole in a separate, covered pan. “If we’re running out of chicken, we can take it from the steam pan, throw it on the grill, cut it, warm it, marinate it a little bit and then it’s beautiful,” says Pesso.

After the flattop is the fry station, where staffers make fried eggplant, falafel, french fries and more. This station consists of two fryers (with one dedicated to gluten-free items) along with an 18-inch worktable where the falafel mix is made and held.

With its operations, business processes and branding all nailed down, The Hummus & Pita Co. has set an aggressive franchise plan for itself: 100 restaurants in the next 5 years. The chain is starting to ramp up to reach that number. Four of its seven current restaurants are franchised, with another two set to open soon, and several additional stores are in development.