The founders of Balance Grille were clear about their goal for the concept when first profiled in FE&S in November 2016: a mission-driven business dedicated not just to “clean Asian food” but also to rethinking how a restaurant venture treats its employees, its food and its guests. 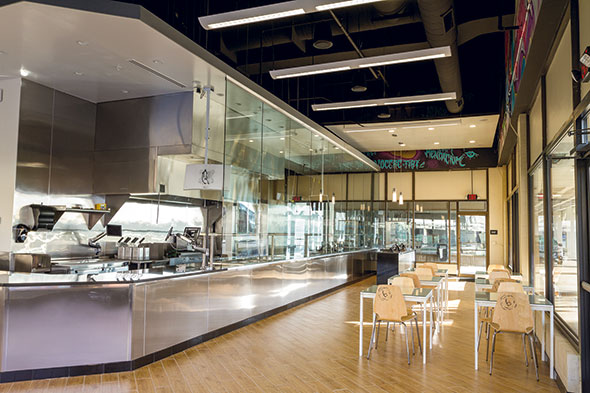 The extreme open kitchen design supports Balance Grille’s commitment to food transparency.“Everything we’re doing is really seeking to create a balance again,” co-founder Prakash Karamchandani said at the time. “[We want to be a place] where employees don’t feel subjugated to serve others but are instead respected in the customer interaction a little bit more and paid like they are; where customers understand what’s in their food and get a little bit of ownership and control back through transparency and knowledge; where we’re conscious about how we affect our environment.”

A little more than two years later, the chain has advanced that mission in ways both impressive and unexpected.

While Balance had just three locations back in 2016, it now has five stores, including a new prototype in Cleveland and a new corporate flagship store in downtown Toledo, Ohio. The company has also moved away from its commissary model to have all sauces made in each store, better connecting employees and guests with the food.

The chain also refined its prototype design. In keeping with its commitment to transparency, Balance Grille’s kitchens have always been fully on display behind glass. Matching that, the chain now has customer-facing walk-ins, allowing guests to see how the staff store and prep food. The chain also moved to a custom kitchen design: All equipment is now the same height, making for a cleaner appearance, and all pieces are on casters, making them easier to move and clean. The front of the house, meanwhile, was given commercial-grade decor (such as flooring and furnishings) instead of relying on items from Ikea and Home Depot, says Karamchandani.

While all of that shows how the company continues to move forward as a business and an agent of change, Balance is actually on the verge of opening another venture that embodies so much of its mission: Balance Farms, an urban farm set to open in the first quarter of 2019.

Located next to Balance’s new flagship store in downtown Toledo, the farm will grow organic produce for Balance’s four Toledo locations. It will also raise and sell ornamental koi fish along with tilapia for pond stocking (not consumption).

The farm operation isn’t just a symbol of Balance’s commitment to sustainability. It’s going to be a serious food source. “We’re not just growing some living basil and a few heads of lettuce. We’re growing real food,” Karamchandani says.

Balance Farms measures 8,600 square feet, but with its use of vertical hydroponics and aquaponics, its will have the equivalent of 30,000 square feet of grow space.

While Balance Farms should operate in the black, it won’t be a serious moneymaker on its own, Karamchandani acknowledges. But that’s not the best way to evaluate the venture. “You’ve got to look at it from a number of angles,” he explains. “It’s not really a profit center as much as it is a great cost savings for the restaurant enterprise.”

The plan, says Karamchandani, is for the farm to sell 70 percent of its produce to Balance Grille’s Toledo stores at a 10 percent discount. That will offset 60 percent of the restaurants’ produce needs. Given how veggie-centric the chain’s menu is — it spends more on produce than on protein — that 10 percent represents a major savings.

The farm’s sales to the restaurant alone, meanwhile, will completely cover its overhead. It will earn extra profit through a number of revenue streams. The remaining 30 percent of its produce will go to local groceries, and the farm may even offer produce box delivery to area residents. Fish sales will also support the farm. Meanwhile, Balance Farms will sell compost made from plant clippings and fish solid waste. It will raise the worms to feed the fish in the compost, while nitrogen from fish liquid waste will become fertilizer for the farm. 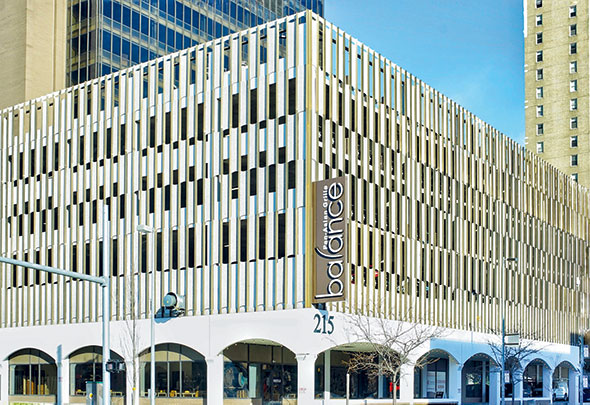 An empty space next to Balance Grill’s new flagship store will turn into an urban farm.

With all its mutually supporting parts, the farm, says Karamchandani, “is very much tied into our brand, being as balanced and ecologically conscious as possible.” The farm, then, supports many of the company’s goals, including being environmentally conscious and serving healthful food that guests can understand. In the past two years, though, the chain has also been innovating in the labor space.

First, Balance eschews hierarchy in general. Employees can easily access most information and data about the company online. On the ground, the company doesn’t have store managers, only shift managers, with administrative tasks handled at the corporate level.

This system, says Karamchandani, works through peer-to-peer accountability, backed up by online resources and carrots for good performance. When employees clock in, they receive an electronic checklist of tasks to complete. As they finish each task, they mark the job complete.

Balance Grille then compiles results from these checklists to create reports on key performance indicators (KPIs). The company openly shares average KPIs with staff, while employees get their own KPIs via private message. Pride in a job well done, then, encourages good performance.

Employees also choose their own roles when they join Balance. Staffers can select the type of job they want, such as a prep, production or a customer-facing role. They can also choose their path through the company.

This system, Karamchandani says, “encourages both lateral and vertical growth. Some people want to come in and have a gig. Others want to specialize in something and want to grow vertically.”

This approach has made Balance a hit among employees, both current and potential. While most restaurants struggle with hiring, Balance actually keeps a waitlist of people who want to join the company.

Employee empowerment. Community building. Environmental stewardship. Clean, local food. These all support the mission of Balance Grille. The past two years have seen the company successfully pursue this mission. In doing so, the company is positioning itself for success on its own terms.