The Refuge Bar & Bistro owners initially felt they would need to hire a magician to create kitchen space in the bar/lounge Mark Zientek purchased in The Woodlands, Texas. So, John Egnor of JME Hospitality in nearby Houston put on his wizard's hat and got to work. The bar/lounge, situated on the ground floor of a 24-story building, took up just more than 2,000 square feet of space. It is located on a bar and restaurant row area called The Waterway, so it has a lot of competition. The location had two former lives, neither of which succeeded, and eventually closed.

Zientek, a foodservice veteran, wanted to add an hors d'oeuvres menu, which required a kitchen. He and Egnor collaborated to create a menu that would work in a small kitchen area. Zientek says his experience managing foodservice operations for The Woodlands Development Corp. gave him an edge in thinking every element through, from storage to production.

The original back-of-the-house area in the 2,080-square-foot space was small, housing just an ice machine and two refrigerators to support the bar. The project team tore down walls, took some space from the front of the house and closed in 237 square feet for kitchen space, roughly 11 percent of the total square footage. The lounge area seats up to 80 people, including barstools. The bar portion of the lounge space takes up 182 square feet.

The menu boasts Baked Mac & Cheese Pot Pie, Pork Belly with Goat Cheese, nachos, a variety of flatbreads, cheese and fruit plates, and sliders. Egnor and Zientek decided on a convection conveyor oven that could handle most of the menu items. The menu also cross utilizes ingredients.

Zientek and Egnor maximized every inch of space, putting shelves above all the equipment, using every nook and cranny for dry storage, and choosing a convection conveyor oven that could handle most of the menu items. Everything was predicated on a menu that was developed carefully to be produced with the equipment that would work in a small kitchen.

The Refuge Bar & Bistro, which has now been open for five years, handles around 250 people over the course of the night. Nine months ago, Zientek opened The Refuge Steakhouse and Bourbon Bar, also designed by Egnor. Larger than The Refuge Bar & Bistro, it totals about 4,500 square feet in front and has a 1,000-square-foot kitchen area. An executive chef now handles both locations, leaving a staff of two to run the bar kitchen.

Before the second location, orders would have to be split and be more
frequent, which drove up the cost. Now, the bar provisions can fold into the Refuge Steakhouse order, which avoids the cost increases related to small orders. The steakhouse also can prepare food for catered events and deliver them to the bar, relieving pressure on the smaller kitchen.

Zientek's tip for success is to focus on the planning up front. He and Egnor were able to achieve the efficiency and productivity of the tiny area by thinking through every element from storage to cooking to dishwashing.

It's working. As Egnor says, "Mark's numbers are phenomenal." 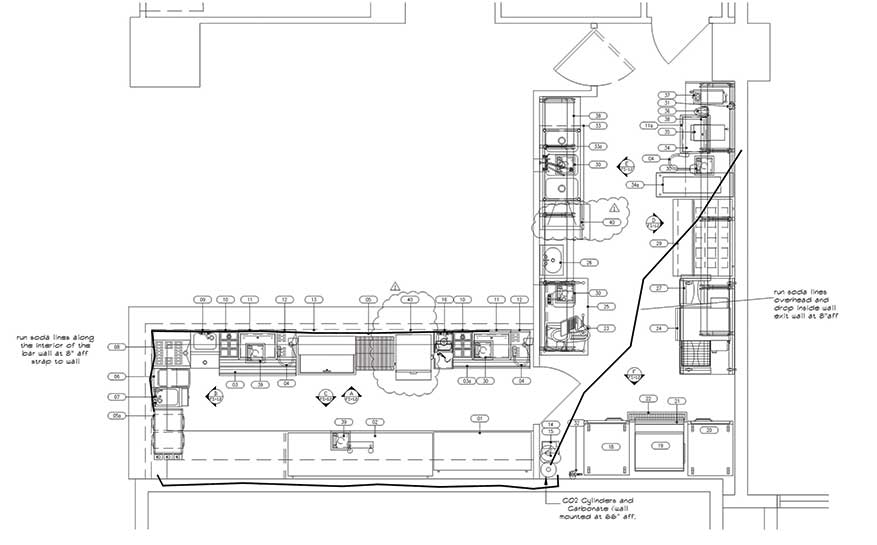 This schematic shows the layout developed by John Egnor of JME Hospitality. The 237-square-foot kitchen sits in the right perpendicular area. The kitchen area includes a door that opens into the bar, which is the horizontal area on the left. The back wall of the bar includes cooler space for beer, etc. The bar faces into the lounge.

The kitchen design optimizes flow in two functional areas: drop-off and pickup. “As the server comes in the door from the lounge (top left of kitchen), he or she drops off dishes and glasses on the right at the warewashing section,” Egnor explains. “On the opposite wall is the staging and pickup area.” The kitchen’s work area includes a microwave and a shuttle oven, the latter helping with menu versatility and volume. In the lower right of the schematic is the refrigerator/storage/ice machine section.

“The key to designing in a small space is to understand the menu,” Egnor says. He adds that the trend is to downsize kitchen space, saying, “Small is the future.”