Third U.S. location planned for 2019, with additional international locations in the hopper. 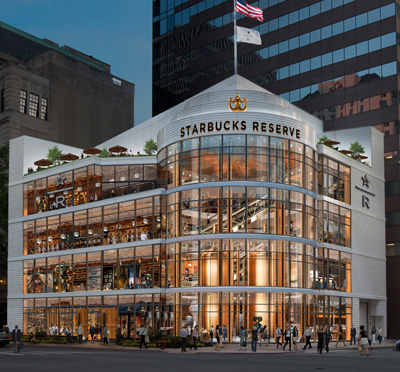 A rendering of the planned Reserve Roastery that Starbucks intends to open in Chicago.Starbucks plans to open a Starbucks Reserve Roastery on Chicago’s Magnificent Mile strip of shopping and eateries in 2019. That will make the third Roastery location, following the opening of its flagship Seattle site in 2014 and the New York City store, which has an open date of 2018. The 4-story, 43,000-square-foot Chicago store, which will reside in the spot currently occupied by Crate and Barrel, will offer multiple brewing methods, specialty Reserve beverages and mixology.

The coffee giant plans to open international Roastery locations in Shanghai later this year and Milan and Tokyo during 2018.

Starbucks plans to open between 20 and 30 Roastery locations around the world and as many as 1,000 Reserve stores. The Reserve store retail concept is not yet open to the public, but Starbucks did announce a Reserve store will open in Seattle in 2017, with another location set to open in the West Loop area of Chicago in 2018.

Reserve Roastery locations will include fresh on-site baking through an arrangement with artisian baker Rocco Princi. Princi food will also be available in the new Reserve stores.