New Roles in Store for Starbucks’ Schultz and Jones

Starbucks’ Howard Schultz will step down from his role as chief executive officer and become executive chairman for the Seattle-based coffee company, effective April 3. At that time, Kevin Johnson, presently Starbucks’ president and chief operating officer, will assume the duties of CEO. 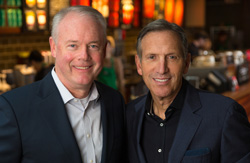 Schultz will continue to serve as chairman of the board and will focus on innovation, design and development of Starbucks Reserve Roasteries around the world, expansion of the Starbucks Reserve retail store format and the company’s social impact initiatives.

Johnson's career spans 33 years in the technology industry which included a 16-year career at Microsoft and a 5-year tour as CEO of Juniper Networks. In 2008, he was appointed to the National Security Telecommunication Advisory Committee where he served Presidents George W. Bush and Barack Obama. He joined the Starbucks board in 2009 and the management team in 2015.