A job as a busboy at a Mexican restaurant hooked Rocco Mangel on the idea of developing his own eating establishment. He spent two years working and formulating his idea, but a chance meeting with his former employers, partners at multiconcept operator Big Time Restaurant Group (BTRG), brought it to fruition. BTRG was interested in adding a Mexican concept to its portfolio and teamed up with Mangel, who subsequently spent 6 months visiting more than 60 restaurants across Mexico and refining his Rocco’s Tacos & Tequila Bar concept.

With Mangel’s vision and charisma — he’s known for donning white platform shoes, dancing on the bar and pouring tequila shots into customers’ mouths — and BTRG’s infrastructure and support, the first Rocco’s opened in West Palm Beach, Fla., in 2007. There are now six units, including five in Florida and one in New York. 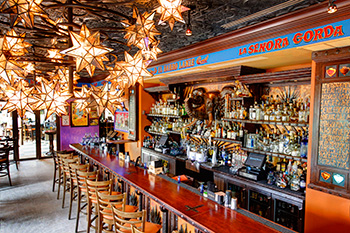 A high-energy tequila bar serves as the anchor of each Rocco’s Tacos restaurant.Rocco’s is a full-service concept anchored by a high-energy tequila bar, which is the marquee feature of every dining room, and an extensive menu of rustic, authentic Mexican street food. Its offerings encompass scratch-made versions of standards like burritos, quesadillas, seafood entrees, salads, sandwiches (tortas), fajitas baked in lava rock bowls and much more. Staff prepare guacamole tableside to order and serve it with fresh chips seasoned with Rocco’s proprietary spice blend.

“Everything is made by hand, and our kitchens are designed to support extensive scratch cooking,” says Lisabet Summa, partner and director of culinary operations at BTRG. “Many of our fillings are slow-cooked braised meats in sauce, which require advance preparation, but we also have a lot going on in the kitchen that’s done at the moment. All of our salsas and sauces are made daily, which takes a lot of precision, a lot of chopping and weighing of spices to ensure consistency. Our tortilla chips are handmade, and our corn tortillas — to the tune of about 1,000 per day in an average location — are prepared continuously throughout service. We’re so big and so busy that we’re really doing large-scale production. It’s product in and product out every day.”

“Large-scale” also applies to Rocco’s ever-expanding selection of tequilas. While the first unit had 125 to choose from, the newest unit, opened in Brooklyn, N.Y., last November, has 450, many of them small-batch specialties discovered by Mangel on frequent trips to Mexico. 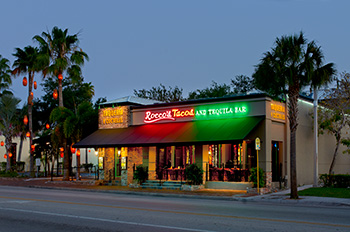 Rocco’s Tacos is a full-service concept anchored by a high-energy tequila bar.The size of Rocco’s Tacos units has grown as well. The Brooklyn restaurant, the brand’s first and only outside of Florida to date, measures 14,000 square feet. That’s 10,000 square feet larger than the original unit and the largest of the six.

While the units have gotten progressively bigger, the prototype’s look and feel has not changed. Large, front-and-center bars provide the energy, and the casual decor package, highlighted by items such as tabletops, lighting, furnishings and artwork sourced in Mexico, is consistent in theme, if slightly unique at each location.

Summa says one significant change the company has made in its two newest locations, in Brooklyn and Orlando, is to open up the kitchens. “It adds so much interest to the dining room,” she says. “And it sends the message that this is a chef-driven kitchen. We have chefs and sous chefs, not kitchen managers. People have such a heightened interest in food production and cooking and chefs, it’s great to open that experience up. It’s also great for the chefs in the kitchen to be able to experience the vibe of the dining room, so it works both ways.” 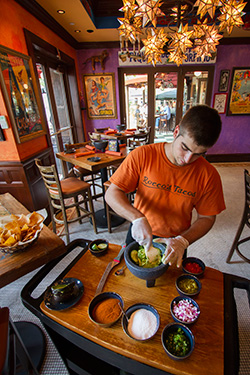 Staff prepare guacamole tableside at Rocco’s Tacos and serve it with chips that feature the chain’s proprietary seasoning.Another change has been to experiment with freestanding locations. Mangel says the Fort Lauderdale and Orlando units are stand-alone facilities, while the rest are in strip malls. “We’ve found that the freestanding ones perform best,” he notes.

With a planned expansion rate of two units per year, Mangel says Rocco’s Tacos will grow slowly and steadily, primarily in Florida and the Northeast for now. Other markets are being considered, however, include Atlanta and Washington, D.C. And a nontraditional location is in the works, thanks to a licensing agreement with HMS Host for a unit at the Fort Lauderdale airport.

“We’re getting emails every day from people wanting to franchise, which we’re not going to do, and from developers who want to bring us into their projects,” Mangel says. “We’ll look at any opportunity we can find that makes sense, but we don’t want to grow so fast that we lose control. Do we want to have 150 Rocco’s Tacos? Maybe one day, but we’re not going to get there at the expense of the brand.”