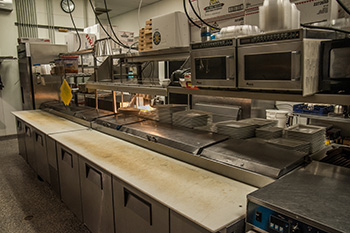 The Jonathan’s kitchen uses two refrigerated make tables: one for salads and cold sides, the other for finishing burgers and sandwiches.Supporting all of this is a surprisingly small kitchen, which is located in the back corner of the restaurant and basically cuts a rectangular shape out of the bar area. Its main section has two lines (one for hot-side equipment and one for salads, sandwich finishing and plating) with staffers working back to back.

The cookline starts on the back wall with a 48-inch chargrill, used for cooking burgers, chicken breasts and other proteins. Staff cook these items to temperature and then move them one station over to a flattop, which also measures 48 inches. Here, kitchen staff finish items, add toppings, melt cheese, and so on. Staff also use the flattop for toasting wraps and sandwiches. Beneath the chargrill and the flattop, an undercounter refrigerator provides easy access to protein items.

Next to the flattop sits a six-burner range with a convection oven below. Staff use the range for sautéing and steaming vegetables. Kitchen staffers also use the range to make pasta for dishes like the linguini with grilled salmon or blackened chicken, as well as cooking house-made soups, which lean toward heavier cream-based offerings in the colder months, and lighter soups in the summer, Mason says.

The oven, meanwhile, is used to cook croutons, baked potatoes and rolls, as well as warm skillets for fajitas.

Next to the oven/range station resides a bank of three heavy-duty fryers, marking the end of the cooking line. The fryers are used to cook french fries, sweet potato fries, wings, fried pickles, mozzarella sticks and two styles of calamari — traditional and tossed in buffalo sauce. To retrieve these items, the cook at the fry station must turn around to pull them from a two-door upright refrigerator that marks the start of the salad and sandwich finishing line.

Following the upright refrigerator are two refrigerated make tables, each with three undercounter doors. Staff use the first table to assemble salads and cold sides like seasonal fresh fruits and coleslaw. The second is used to finish sandwiches and burgers. As such, it holds cheeses, sliced tomatoes and onions, lettuce and condiments. In each unit, the undercounter storage holds prepped backup items. When staff assemble salads, finish sandwiches and plate entrées, team members working this line pass items through a window, where a server retrieves them. At the end of this line sits a slight anomaly, a cook-and-hold oven, where the chain slow cooks its prime rib.

Not all of the food served at Jonathan's comes off these two lines, though. One of the chain's most popular offerings is its pizza, made with house-made dough and fresh toppings.

Facing the cookline, the pizza station sits against the wall on the left. The station consists of a refrigerated make table with undercounter storage and a two-level conveyor oven. Going with a conveyor oven at this station was one of the biggest changes the brothers have made to the kitchen since they took over, Curt says. The first Jonathan's used a stone-deck pizza oven. While that did the job during slower periods, they found it difficult to maintain product consistency at peak volume. Now Jonathan's takes full advantage of the double-layer conveyor by offering two-for-one pizzas (as well as two-for-one beers) on Tuesday nights, turning what was one of their slowest evenings into one of their busiest.

Two walk-in refrigeration units consume the bulk of the remaining back-of-the-house space. One unit measures 18 feet by 6 feet and holds produce and meats, as well as cakes and other pastries. At the end of this refrigerator is a door to a 6-foot by 6-foot freezer that holds ice cream, fries and other frozen items.

The second walk-in is dedicated to beer. It holds both bottles and kegs and sits directly behind a wall covered with televisions.

One thing that Jonathan's kitchens lack is a large prep space. Other than a 48-inch worktable on casters and some smallwares, Jonathan's prep area is nonexistent. Instead, four to five team members arrive at 9 a.m. each day to slice vegetables, cut fruit, portion ground beef into burgers, and prep house-made sauces and dressings, as well as place the prime rib in the cook-and-hold oven for serving no earlier than 5 p.m. After the lunch rush is over, the team takes stock of what's needed and performs prep for dinner.

This approach to prep has helped Jonathan's maximize its front-of-the-house space, where the money is actually made. While many casual dining concepts dedicate 30 percent to 35 percent of their space to the kitchen, the back of the house at Jonathan's only takes up 25 percent of the restaurant's footprint.

With Jonathan's menu and operational style having gained attention and customers, the task ahead is growing the business while keeping an eye on its fundamentals — a tall order for two relative newcomers to the industry who are simultaneously running four restaurants, building two and looking for locations for two more.

To keep the business manageable, then, they plan to limit Jonathan's expansion to the Nashville area, at least for now. If and when they do expand out of the Nashville area, the brothers will likely tap a long-time employee steeped in the company's culture to run its remote locations.

"We really don't go for downtown, urban concepts. We're more about the suburbs," Mason says. "We like being the local place among the big chains. We like finding where Darden and Buffalo Wild Wings are and going in next to them."

Even with the success of this approach, the Revelettes don't see themselves trying to cash in by setting up a franchise system, at least not in the near term, adds Mason. The partnership between the brothers has gone so well, they figure, why tinker with what's working? "We have played around with the idea of franchising," he says. "At the end of the day we just keep coming back to us as a family and a team unit. We want to keep everything in house."

With innovative and healthful options, high-end furnishings and a unique bar/restaurant approach, two brothers have turned a low-growth mom-and-pop restaurant into one of Nashville's most popular sports bar chains in just four years.