Keith Richards took a loan against his house and his love of Greek food to create this rockin’ “fresh casual” chain. 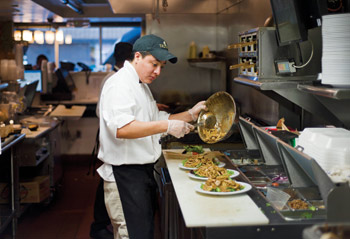 It sounds like the beginning of a cautionary tale that people in the restaurant industry would tell their friends. A couple takes a vacation to Greece, falls in love with the food and decides to open up a Mediterranean restaurant when they get back home. The story too often ends with a failed venture and the aspiring restaurateurs facing financial ruin.

But that's not how Keith Richards' story ends.

When Richards and his wife, Amy, chose to start their restaurant, he already had years of foodservice experience under his belt, including a decade at Bottega, one of the mainstays of fine dining in Birmingham, Ala.

That experience allowed Richards to turn a $50,000 loan — signed for with his house as collateral — into Taziki's Mediterranean Café, an emerging "fresh casual" chain that now boasts 33 units and counting, located primarily in the Southeast.

Keith and Amy's Greek vacation took place in September 1997. When they returned home, they spent the next few months crunching numbers and figuring out if and how they could start their restaurant. While Richards had plenty of operational know-how, he lacked funding to make his dream a reality. The only cash Richards could get, in fact, was the aforementioned loan against his home.

The limited budget led to Richards literally building Taziki's with his own hands. After taking over the space previously occupied by a hot dog restaurant, Richards, along with his wife and parents, did much of the construction work, including removing old tile and laying down new flooring, running electrical wires, and hanging lights.

Richards also used the previous tenant's kitchen design as a cost-saving measure. With the hot dog stand's natural gas, electrical and water hookups already in place, Richards designed his kitchen to match those utilities. And the design created around those hookups still serves as the basis for every Taziki's kitchen today.

In addition, Richards took steps to cut the cost of the equipment that went into that first kitchen. "We had to do this on $50,000. I went to restaurant auctions and bought used equipment," he says. "Even today in some of my restaurants I have some of the original tables. They're probably 30 years old because I bought them at auction 17 years ago."

With all that he went through to make that first Taziki's location a reality in 1998, it's no surprise that Richards is incredibly committed to the concept. Jim Keet, now the chain's president and CEO, probably best sums up Richards' feelings about Taziki's. "This," Keet says, "is more than just a labor of love on Keith's part." As Richards explains, with real passion, it's his baby.

After risking all that he had and more to start Taziki's, Richards was rewarded with quick success: Business started booming almost immediately, he says. In 2002, Richards opened a second Taziki's location in Birmingham and then a third 18 months later.

Over the years, several parties approached Richards about partnering to grow the business, either through licensing, franchising or straightforward logistical support, but he turned them down consistently. With a handful of restaurants to run and 2 sets of twins — yes, 2 — born less than 18 months apart, the time never felt right for him to get aggressive with expanding Taziki's. Until 2008, that is.

That's when a pair of successful multiunit operators — Michael Bodnar and Nick Pihakis — approached Richards. After learning about their experience and track record, Richards decided that the time to take Taziki's to the next level had come.

In 2008, Richards began licensing the Taziki's name, menu and operational know-how to a few partners — including the current CEO Keet — and in 2012 the chain officially started a franchise system. That same year, Keet, a longtime hospitality industry executive, became the company's CEO, while Richards took on the chief development officer role.

So what's drawn so many people, from customers to hopeful partners, to Taziki's over the years?

First, there's the food. Save for the pita bread, each Taziki's restaurant makes everything from scratch with high-quality ingredients. That includes sauces, salad dressings, pasta and chicken salads, soups, salads (for which all vegetables are hand cut on-site), lamb gyros made with meat from whole lambs' legs (not compressed meat on spits) and more.

Taziki's features an inviting atmosphere too. Richards says he wanted a place where people could come to enjoy a nice meal and really talk to one another. For that reason, none of the Taziki's locations have televisions. Most include a community table that can seat 12 in order to accommodate large families or groups of friends.

Instead of decorating Taziki's in the blues and whites found in many Greek restaurants, Richards opted for two shades of green (one dark and one light), solid wood tables and chairs with dark finishes, wooden wainscoting (also referred to as beadboard) on the walls that goes from floor to chair height and faux marble countertops.

Large canvas prints of photos that Richards and his wife took on their vacation to Greece decorate the walls along with triptychs of famous Greek locations such as Mount Olympus and the beaches at Santorini.