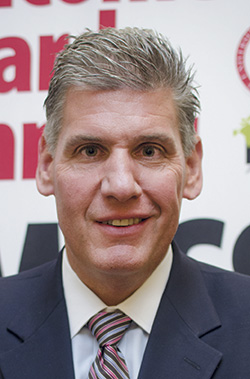 Eichstaedt is the director of Retail Dining at UMass Amherst. He graduated with his MBA from the Isenberg School of Management in 2009. Under Eichstaedt’s leadership the retail dining department has developed into a nationally recognized and award-winning dining program that has experienced annual double-digit revenue growth for each of the last seven years. Prior to joining UMass Amherst, Eichstaedt was employed as a regional manager for the Compass Group in the national accounts division.

Peter McGillicuddy, senior associate, Colburn & Guyette, oversees the overall production and coordination efforts of all projects assigned to his team. Beginning his career at Colburn & Guyette as a production team member, he quickly learned the production operation. This, coupled with his attention to detail and communication skills, proved to be valuable as he led production on higher-profile projects.

Dan Raih, AIA, LEED AP, has been a senior architect at Bruner/Cott for more than 35 years. From the inception of design through the completion of construction, he has been responsible for many of the firm’s college renovation projects and new buildings, particularly student centers, dining and food service projects, and conference facilities. A graduate of the University of Notre Dame with a bachelor of architecture degree, he has numerous professional associations and has won many awards.

Robert Simmons, AIA, LEED AP, principal of Bruner/Cott, Bob Simmons joined Bruner/Cott in 1987. With his strong background in design he has significantly contributed to many of Bruner/Cott’s best-known projects, including the MIT Faculty Club, the rehabilitation of Memorial Hall at Harvard University, the Sarratt Student Center, Commons Center at Vanderbilt University and the adaptive reuse of the former Sears Roebuck warehouse in Boston, now known as Landmark Center. A graduate of Carnegie Mellon University with a bachelor of architecture degree, he has numerous professional associations and has won many awards.

Van Sullivan, manager of Campus Center Foodservices, has been a manager at UMass Dining since March 2010. He oversees foodservice at the Campus Center, including the new Blue Wall, Campus Catering, 11 smaller outlying cafes, and 2 late-night operations. He has an extensive retail background along with catering and retail operations experience, including positions at Brooks Brothers and Barneys New York.

Ken Toong is the executive director of Auxiliary Enterprises, which is comprised of UMass Dining, Hotel UMass, UMass Conference Services, Licensing, UMass Catering, University Club & Restaurant, as well as the University Bookstore. Auxiliary Enterprises provides the core service that supports the academic and extracurricular goals of the university. Toong is the founder of the World Chef Culinary Conference hosted at UMass Amherst. Toong’s many awards include the IFMA Silver Plate and the 2012 White House Campus Champions of Change Award.