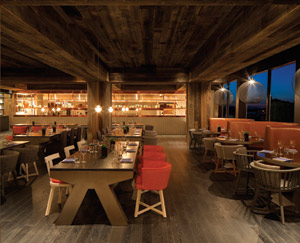 The dining room’s earthy color palette, natural woods and soft lighting complement the menu, which features locally sourced and locally purchased ingredients. Photo by ©Gerry O’Leary/www.gerryoleary.comWhen the Radisson Blu hotel opened in March 2013, it became the first hotel linked by skyway to Minnesota's world-renowned Mall of America. The 13-story, 500-room, $137.5 million hotel is part of the mall's second expansion phase. Today the mall spans 4.2 million square feet with 520 stores, 50 restaurants and several theme-park-like attractions. Located about 15 minutes from downtown Minneapolis and St. Paul, the megamall attracts nearly 42 million visitors annually. This and other projected expansions will add up to 5.6 million square feet and bring in another 20 million visitors.

Branded by Radisson's parent, the Carlson Rezidor Hotel Group, the 260 existing Radisson Blu properties are referred to as the "upper upscale hotels," with locations in Chicago (Radisson Blu Aqua opened in 2011), Europe, Africa, the Middle East and the Asia-Pacific region. The promotion materials for the Bloomington, Minn., Radisson Blu present this hotel line as "an edgy, fashion-forward aesthetic with chic, modern Midwest appeal." For example, the lobby's porcelain-like panels create a multifaceted sculptural installation referencing a cool, pristine shopping bag.

"We identified this location as a strong investment opportunity for one of Carlson's flagship hotels in part because of the volume of U.S. and international visitors drawn to Mall of America annually," says Thorsen Kirschke, Carlson Hotels' global chief operating officer. "It also presented a unique opportunity to partner with the high-end design aspirations of the mall and meet the need for additional 'upper upscale' hotel offerings in the market."

Guests who take an elevator up one level from the lobby find a lounge with ultramodern chairs in bright red and other colors. Turning to the left of the escalator, visitors see the entrance to the FireLake Grill House & Cocktail Bar, modeled after the first FireLake, which opened 10 years ago at the Radisson in downtown Minneapolis.

"The Mall of America is one of the biggest malls in the world, and we wanted the FireLake Grill House & Cocktail Bar to be a comfortable refuge for people either taking a break from spending the day in the mall, or staying in the hotel as a business or leisure guest," says Jim Hamilton, creative director at Graven Images, the firm that designed the restaurant.

"Given the hotel's unique location, the main challenge was to create a warm, relaxing environment in what is otherwise an extremely contemporary hotel experience,"
Hamilton continues. "We complimented the Minnesota-centric menu produced by the executive chef, Paul Lynch, by using reclaimed Minnesotan barn wood to clad the majority of walls, columns, beams and ceilings in the restaurant and bar. These were sourced from old barns all over Minnesota. Apart from the incredible texture and tone the wood provides, by the end of their visit, guests will have gained an understanding of the region from both the food and from the décor."

Featuring a mix of classic American heartland flavors, the menu incorporates as many fresh and locally produced ingredients as possible. According to Lynch, who conceived and opened the first FireLake location and now leads dining operations at the Mall of America location, the area's Scandinavian, German and Irish populations influence the food in the region. "The restaurant is about the flavors of real burning wood from the land of 10,000 lakes," he adds.

The menu features items categorized primarily by their production methods: grill/mesquite; oven/white oak; flavor of the flame/hickory; simmered and tossed; plancha and skillet. The other menu items are more generic: pastries and cream; to share or not (appetizers); and small plates.

Efficiency was the key driver for the back-of-house kitchen layout. "We're very lean, which is very much in keeping with today's facility designs," Lynch says. "Overall, the square footage is one-third smaller than the kitchen downtown for twice the volume."

Placing the entire kitchen, restaurant, bar and banquet rooms on one level also contributes to the facility's efficiency. In contrast, the downtown facility's layout is on two floors.

"Our challenge was to create a central circulation spine to the space to accommodate traffic from the storage to the production areas, food going in multiple directions to the restaurant, banquet areas and employee dining as well as dishes flowing back from those areas," says foodservice design consultant Steve Carlson, FCSI, LEED AP, president of Robert Rippe & Associates, based in Minnetonka, Minn. "The space was typical of a hotel kitchen with the closely placed column based on the hotel rooms above. This resulted in a long, linear space which made it challenging to position two cooking lines face to face and still get decent traffic aisles. We knew the corridor couldn't be too narrow because it had to accommodate banquet carts, plate carts, ice machines, room service warmers and a space for servers to walk."

Another challenge appeared when the planning team discussed the size of the back-of-the-house corridors behind ballroom and meetings rooms. "It was a challenge to get back-of-the-house corridors wide enough for all the equipment and staff needed for plate-out and bussing," Carlson says. "So the architects made the corridors wider [so they would] be functional. We had to compromise on access to the junior ballroom. Staff can go through the back of the house to take catering carts to the main ballroom, but staff must take carts through a public corridor to get to the smaller ballroom."

Food arrives at a dock two floors below the kitchen where a receiver checks the orders. Elevators transport deliveries up to the kitchen so staff can place food into storage, which includes coolers for produce, meat, dairy and banquets, as well as one freezer and one area for dry goods.

"Storage and production are on one level, so we don't handle food twice," Lynch says. Unlike at many hotels, this Radisson Blu does not have a main storage area where staff initially store food before reissuing it. Cooks for each restaurant production station go to the appropriate storage areas and take the ingredients they need. On the other hand, cooks in the banquet and executive lounges fill out requisition forms before coming to the storage areas to secure what they need for their stations.

The hotel's dining receiving and purchasing agents work from 7 a.m. until 5 p.m., and the storerooms are also open during those hours. After 5 p.m., only supervisors and sous chefs can access the storerooms. "My office sits outside the storerooms, and I'm here often," Lynch says. "There's a great benefit for this positioning because I can keep an eye on what and how much is being taken out of storage, including from the freezer and nonrefrigerated storage areas holding items such as china. Also, I hear conversations so I can pick up on the staff's needs and challenges. Tight purchasing and usage controls, along with the way we've set up the production means I am coming in below my 25 percent food budget at 19.2 percent." This setup reduces theft, as well.

The production layout maximizes efficiency in product usage and labor. For pre-preparation, the kitchen features a garde manger area containing a prep counter with sinks, a maple-top counter, a food processor and a one-gallon blender. The meat and seafood preparation area contains work counters, a sausage stuffer, a vacuum-packaging machine and a mobile warming cabinet and smoker. At the adjacent pantry/bakery, staff use work counters, a 1-gallon blender and ingredient bins, as well as a batch freezer, reach-in refrigerator, 30-quart mixer, 5-quart mixer and combi oven shared with the restaurant hot prep area to make Amish malted chocolate peanut butter pie, peach rhubarb cobbler, lemon Chantilly-blueberry pie and dark chocolate truffle tart. An ice cream and gelato maker rounds out the equipment in this area.

To make sauces and soups such as Minnesota wild rice; tomato and fennel; and seasonal variations, staff use 40-, 6- and 12-gallon kettles. They use a 40-gallon tilting fry pan for searing and large-batch cooking. The hot prep area also features a two-section fryer, a charbroiler and a grill with oven beneath.

The kitchen also contains three combi ovens and a blast chiller, which contribute to the meal preparation for banquets. Staff prepare planned dishes using the combi ovens, which Lynch selected because they control temperature, time and humidity. Staff quickly cool cooked items in the blast chiller. On the day of a banquet, staff remove the chilled food, portion and plate it and place the plates on mobile plate racks that fit into the roll-in combi ovens. When a function starts, plates are rethermalized (an eight-minute cycle), then moved to the thermal holding cabinets adjacent to the ballrooms and other meeting rooms. At the point of service, staff add garnishes before the serving staff deliver plates to guests.

For Lynch, this system minimizes stress on the production process. "I prefer this system compared to the more traditional plate-up system at the point of delivery, because I need many fewer staff for preparation and serving," Lynch says. "We can serve 800 guests with less stress than when plating for 200 guests. I feel we get much fresher food this way because we cook the food in advance, chill it to the exact temperature we need it to be, plate it exactly the way we want because we're not working under the same pressure at the point of service, and then reheat at automated, tested temperatures. At the point of service, we can add crisp fried onions, micro greens and fresh herbs."