Tijuana Flats Does More Than One Thing Well

This fast-casual Tex-Mex chain’s redesign features a more efficient kitchen and other elements to improve the experience for off-premises and dine-in guests.

Do one thing well.

That (possibly apocryphal) line from Steve Jobs serves as a pretty good description of the fast-casual sector. Most successful concepts focus on a single offering, be it burritos, hamburgers, individual-sized pizzas or something else. They may add a quesadilla here or black bean burger there, but the focus clearly remains on doing that one thing well. 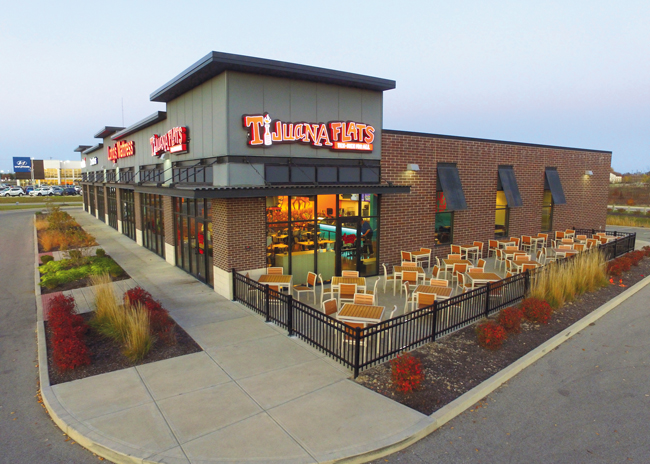 The chain prefers spaces with outdoor seating. Future locations will have multicolored umbrellas designed to attract the attention of passersby.

Based in Maitland, Fla., this fast-casual Tex-Mex concept does lots of things well. Its menu includes not just burritos, but also tacos, chimichangas, enchiladas, flautas, quesadillas, nachos, tostadas and more. With 125 units, the chain clearly does them well enough to keep its customers happy and coming back for more.

The chain serves most of these customers, notably, via company-owned stores. In fact, franchisees run only 20 of Tijuana Flats’ restaurants, and until recently, the chain hadn’t opened a new franchised location in more than a decade.

That’s about to change, though.

Restarting franchise sales takes more than a flip of a switch, of course. To get to a point where it could successfully sell and support franchises in the 2020s, Tijuana Flats needed a makeover, so much of Wright’s first 18 months was dedicated to developing a new prototype. The first location with this new design was opened last November in Noblesville, Ind. 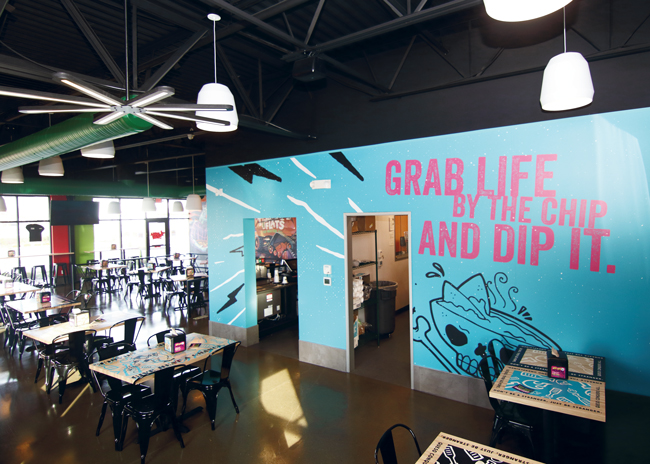 One of the challenges facing Tijuana Flats’ legacy design was its back-of-the-house operations, according to Wright.

While the company’s menu expanded over the years, its kitchen operations didn’t keep pace. The chain’s straight production line forced staffers to move back and forth, crossing paths on a regular basis. Operational challenges only intensified in recent months and years as more business went to off-premises orders.

In the new design, Tijuana Flats deploys a T-shaped kitchen with mirroring assembly lines. This setup increases kitchen capacity by 50%, says Wright. “Everything moves in one direction toward the front of the house,” he explains.

The top of the T sits on the production area’s back wall. This space features hot equipment used primarily for prep work and batch cooking. The hot line begins with two larger burners used to make items like sauces, ground beef taco meat and other items.

Next to the burners sits a steamer, which staff use to cook rice and to reheat and hold pans of prepped food, including rice, queso and chicken. Beneath the steamer, an undercounter refrigerator stores these pans.

Following the steamer comes a bank of fryers. Here, the chain makes tortilla chips and crispy taco shells fresh daily, along with on-demand items like flautas and chimichangas. Legacy restaurants could have two or three fryers, but with the recent addition of wings to the menu, all new locations will have three fryers, says Steven Culbert, senior vice president of operations.

Past the fryers is a flattop sitting on a set of refrigerated drawers, which staff use to batch cook chicken and steak as well as to produce offerings like grilled flautas and quesadillas. To execute these items, a small steam table with ingredients sits next to the flattop.

While the steam table/flattop combo marks the end of the top of the T, the perpendicular section comprises two identical lines for order assembly. Each line opens with the only piece of new equipment in the redesign, a panini press used to heat tortillas. “Before, [staffers] would have to turn around to heat the tortilla on the grill. That press by itself will do great things for speed of service,” says Culbert.

Following the panini is a steam table with a work surface where kitchen team members add the dish’s core ingredients such as rice, beans and meat. Staff then move orders down to a three-foot cold table, where culinary staff add items like cheese, lettuce, salsa and sour cream. From there, staff either plate orders for dine-in guests or bag the food for off-premises customers.

The dine-in/off-premises split, though, comes into play much sooner in the production process. With two identical assembly lines, Tijuana flats now splits orders, sending dine-in/carryout down one line and delivery/online orders down another.

“Those orders might have 20-minute lead times because they’re coming in from off-premises. This way, our dine-in orders aren’t going to be behind a longer lead-time ticket. It’s going to help us provide better service for our dine-in guests without interrupting the flow of our takeout business,” Culbert says.

To help manage workloads on these two lines, the company has built some adjustments into its newly deployed kitchen display system, Culbert adds. If one line gets overloaded, half or even all of its orders can be transferred to the other with a push of a button.

Though the new kitchen design gives the chain more throughput and more flexibility, it didn’t meaningfully add to the equipment package cost, says Culbert. For the most part, it simply used the same equipment in a new layout. The old straight-line kitchen, for example, had two 3-foot cold tables next to each other; the new T-shaped kitchen with mirroring lines just places these back to back.

Labor costs are flat as well. During peak times, one staffer handles the hot equipment while the matching assembly lines have two staffers each. This results in less crossover, fewer steps and a more efficient operation. 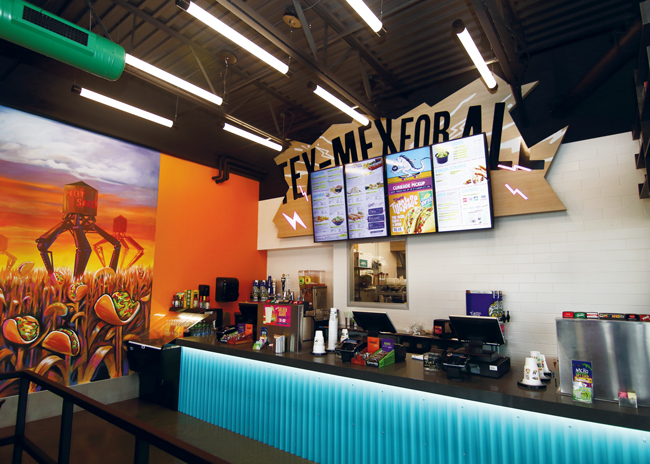 Tijuana Flats’ redesign didn’t stop with the kitchen. It also includes an entirely new front of the house.

On that front, Tijuana Flats was due for an update, says Wright. “If you look at the original design, it had anything from superheroes to cartoons to monsters painted into the murals of the restaurants. We did a number of focus groups — the majority in our major markets — and what we heard from consumers was that the brand has not evolved with time,” he says.

The redesign brought Tijuana Flats’ appearance into the 2020s while maintaining some of the chain’s key personality traits. The murals and art pieces, for example, maintain the brand’s lighthearted, irreverent personality. Key elements include a gecko character and a person in a hazmat suit handling hot sauce bottles with tongs.

Guests entering the redesigned restaurant find a space that’s brighter and much more open. The design partially achieves this through Tijuana Flats incorporating a blacked-out open ceiling instead of using ceiling tiles.

Overhead design elements aren’t designed to be invisible, though. Quite the opposite, in fact. The lighting package features an eye-catching combination of bell-shaped pendants along with custom-made star fixtures sprinkled throughout. The ductwork in this first location is painted a forest green, though it will be updated to a lime green in future stores, giving it more of a pop, says Wright.

The front-of-the-house redesign also introduces some operational changes to the chain. The POS counter now includes a reach-in cooler the chain uses to store bottled beverages and dips. Due to the success of this feature, Tijuana Flats intends to use a larger model in future stores. “We really underestimated what we could do and how we could capitalize on that grab-and-go process,” says Wright.

The chain also has plans to introduce ordering kiosks to the dining room. A single employee can staff this area to help customers and drivers retrieve online orders and assist guests using the kiosks as necessary.

With the new prototype in place, Tijuana Flats will now focus on growing its store count, with the chain aiming to double in size in the next five years. While franchising is an important goal, Tijuana Flats will continue opening company-owned stores in its home state of Florida. 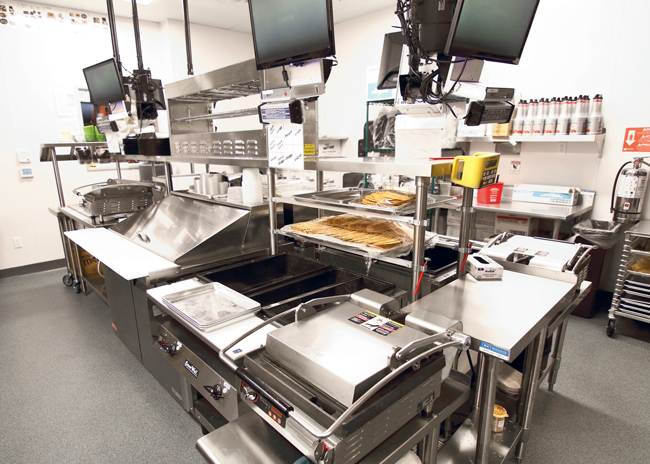 The assembly lines mirror one another, allowing dine-in and off-premises orders to be produced separately.

Tijuana Flats at a Glance