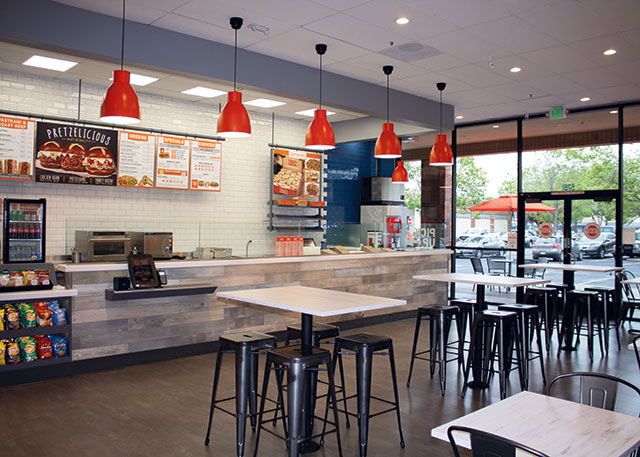 Togo’s new design includes a change in its ordering system, something that is now proving a benefit to the redesigned units that have remained open during the COVID-19 pandemic. New self-service ordering and payment kiosks are located under a huge “Skip the Line” wall graphic in the front of the store. Customers who want to place their orders at the counter now pay at the beginning of the sandwich line, so the ticket travels all the way down the line with the sandwich. Order accuracy has increased, says Farid Biglari, vice president of operations for the 200-plus-unit chain. That increased accuracy has led to labor savings and waste reduction, he says.

Previously, Biglari says, “customers would walk up to the counter, their hand goes on the counter and they talk to the sandwich maker.” Now, a glass partition separates customers from sandwich makers but still allows for communication.

Dubbed “Togo’s 3.0,” the revamp brought a fresher look to the front-of-the-house area, powered by brighter colors and eye-catching graphics. In the prep area, Togo’s switched to a speed line sandwich assembly system.

“It’s a drastic change from what it used to be as far as equipment, layout, seating, decor,” says Biglari. “Everything’s changed.” Speed, convenience and guest efficiency drive the 3.0 service model, he explains.

The most obvious change is in the sandwich construction line. Previously, customers would work with one crew member who took the sandwich all the way through the assembly process. That meant separate stations loaded with meat, cheese, bread and other staples for each sandwich maker. “With the new 3.0 model,” Biglari says, “there’s one station that cuts bread; there’s another station that does the protein and the cheese.” 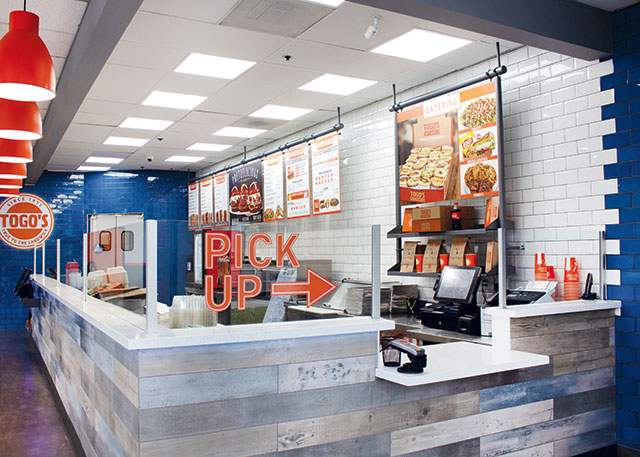 The store refresh includes a lower counter with glass partition that allows customers to watch as staff prepare orders.

The new sandwich-making system has shown benefits in saving time and product. Staff working the queue-type assembly line can assemble sandwiches more quickly, an important factor for a chain that does most of its business at lunchtime. Biglari adds that the redesigned stores are averaging anywhere between 1% and 2% in product savings due to decreased waste.

Designing a line that produces sandwiches more smoothly took some rethinking of equipment. “In the old service model,” Biglari says, “there was a lot of going back and forth from back of house to front of house to stock up the fridges,” he explains. The new design relies on undercounter refrigeration units at each station that can hold all the ingredients needed to make the sandwiches. Instead of the 27-inch sandwich tables used before, the new assembly line features 72-inch mega-top prep tables positioned atop the undercounters.

The front-of-the-house area also underwent a fairly extensive transformation. The previous Togo’s design was based on dark wood, with green and orange as major accent colors. Since the chain’s logo is orange, that was kept in the new design scheme, but many of the main walls are now white with orange accents. LED lighting was added behind the decor for extra emphasis. “When you have something orange on a white wall, it really pops,” Biglari says. “It’s more of a modern look.” Hanging lights were removed in favor of recessed lighting, which reduced lighting costs by 35% to 40%. Ceilings were raised in units where feasible to do so. The modifications give the Togo’s units a more open look. Biglari says, “Guests have actually asked me, ‘Did you make the store bigger? Did you add to it?’”

Part of Biglari’s goal in the 3.0 design was to find cost-efficient equipment while maintaining what he calls “the wow factor.” In sourcing equipment and decor for the redesign, Togo’s bucked the trend of developing customized equipment. Biglari’s strategy was to approach equipment suppliers and ask them for products that were “extremely close to what I need, without customizing.” That helped Togo’s to source products at a lower cost and with a shorter lead time than some of the customized pieces they had previously used. The cost savings implemented with the new design have had a real impact on the cost of opening up new units, he says, estimating that the initial startup cost per store has been lowered by as much as $100,000. “At the end of the day,” Biglari says, “I want [it] to be as cost-efficient for the franchisees but don’t want to lose the wow factor.” 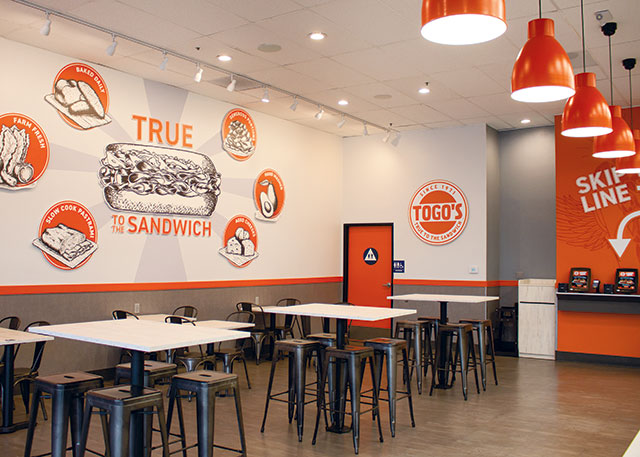 The brighter, more contemporary design of Togo’s appeals to younger customers, according to the chain.

Learnings from the early 3.0 installations are being implemented into newer installs. For example, the back counter in the sandwich prep area was previously a single long stainless steel table. In the new design, that counter is sectional. “So, let’s say in five years, we want to redesign or change something. We don’t have to do major construction anymore; we can pull one unit out and put something else in there,” he says.

Approximately 25 units have the 3.0 design so far, and the franchisees with the redesigned stores have reported pre-pandemic sales increases of around 18% to 20% over the previous year. “They’re happy because they have better sales, better costs and happier guests,” Biglari says.