Offering what it deems the best of all the regional barbecue styles, this fast-casual outfit commits to authenticity in both design and cooking. 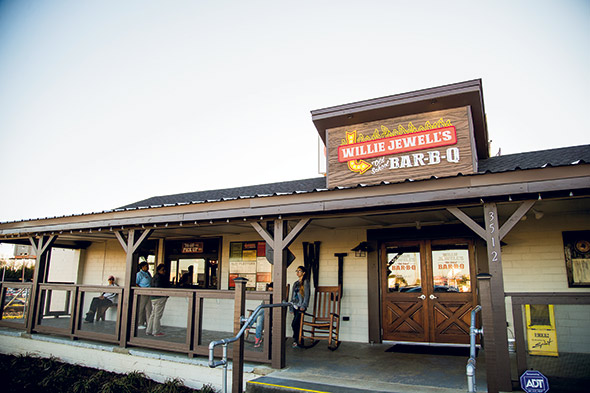 It’s fair to describe the two concepts, you see, as parent and child — a duo that looks and acts so much alike that you can’t help but notice how similar they are.

At 69 years old, Jacksonville, Fla.-based Bono’s plays the parent in this metaphor. The chain, with about 20 locations primarily in that market, specializes in serving authentic pit barbecue, with the pit itself sitting in the center of the dining room. This provides a great dinner-and-a-show experience, says Josh Martino, president of Bono’s and Willie Jewell’s.

“Our dedication to the quality and authenticity of the product and how we do it at Bono’s is the reason we never grew to 200-300 units. While it may have held us back in the eyes of some, I think it’s the reason we’ve had such great longevity over the course of 69 years,” says Martino.

Still, Bono’s is a business, and it’s the nature of businesses to grow. So, about a decade ago Martino began exploring how to grow Bono’s. One of the biggest obstacles to the chain’s expansion, he says, was the cost of opening a new store. At between $1.8 million and $2 million, it was simply out of reach for many potential franchisees.

The company then began exploring an operation with a lower price tag. The result was Willie Jewell’s, a fast-casual barbecue concept with a price tag between $550,000 and $750,000 to build. 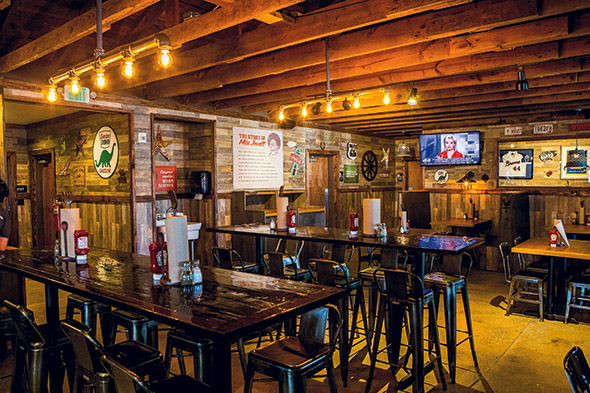 The Best of Barbecues

In many ways, Willie Jewell’s is a scaled-down version of Bono’s. In fact, the company at one point considered calling it “Baby Bono’s” or something similar. (To avoid confusing Bono’s customers, the company took the name from another source; more on that later.)

The menu of Willie Jewell’s for example, is nearly identical to Bono’s. Willie Jewell’s also matches Bono’s in its unusual lineup for the barbecue space, which is intensely regional in style. Instead of serving one type of barbecue, Willie Jewell’s offers what it deems the best of all the different styles: The ribs are St. Louis, the pork butt Carolina, the brisket Texas, and more.

Despite having fairly similar menus, the exact method Willie Jewell’s uses to cook its meat differs from Bono’s. Bono’s, recall, uses a pit in the front of the house. Today’s landlords, however, aren’t keen on this model, Martino says. Instead, the chain relies on a smoker that sits in the back of the house, with a loading and unloading door flush against the restaurant’s back wall. This approach, Martino adds, saves valuable space inside the building while also eliminating the need for an expensive hood designed for solid fuel exhaust.

Beyond that, the concept features a relatively simple back of the house. A hand sink next to the smoker makes it easy for staffers to wash up after loading raw proteins. The back of the house also includes worktables for prep, a three-compartment sink, a dish area and dry storage.

A walk-in cooler/freezer combo that measures about 8 by 12 feet handles cold storage. Like the smoker, this walk-in sits flush against the restaurant’s back wall, with an entryway built into the building.

“Your three biggest pieces of equipment are your smoker, your cooler and your freezer. We don’t like to pay rent on those. If we get a landlord that lets us put them out back and frees up space inside, that’s an ideal lease opportunity for us,” says Martino.

A staff member removes meat from the smoker, placing the protein in a pass-through warming cabinet. The other side of this cabinet opens to the front-of-the-house cookline. 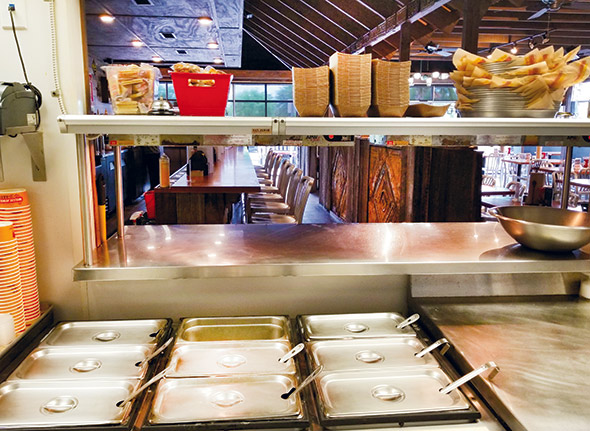 After sides are plated, staff place finished dishes on the pass-through window for delivery by table runners.

This warming cabinet is the piece of Willie Jewell’s equipment package that’s changed the most since the first store, Martino notes. The original cabinet wasn’t a pass-through unit. Instead, staffers would unload meat, place them on a cart and roll them to the front-of-the-house production line to load them in the warmer.

The hot holding cabinet is just one part of the main production area, of course.

The pass-through sits along this area’s back wall. Moving right to left is a lowboy refrigerator-freezer, which holds premade salads along with items for the fryer. These include french fries, hushpuppies, catfish, onion rings, fried pickles and chicken tenders. All fried items cook in just two fryers. No single unit is dedicated to one type or group of items, simply because there’s no need to do so. The chain has tested and worked with its products for years and feels it doesn’t have a problem with flavor transfer.

Following the fryers sit a gas-fired chargrill, then a six-burner range with an oven below. Staff use the grill to make hamburgers, including one topped with pulled pork and cheddar cheese, as well as grilled chicken used for sandwiches, salads and a dinner platter. On the range, staffers make items like Brunswick stew (a tomato, bean and vegetable dish) and use the oven to cook desserts like cobbler.

While just a few pieces make up the back side of the production area, the side facing the front of the house is just as simple. Starting from the right, directly across from the warming cabinet sits the cutting station. While most of the production line is behind a wall, this station has a cutout, along with a food shield to protect the food. Willie Jewell’s exposed this station, says Martino, to show customers it serves real barbecue cut to order. It’s not uncommon, he adds, for guests to stand at that window and talk to this quasi pit boss about the chain’s food.

Again moving right to left, next comes the middle station. The staffer here serves as the production area’s maestro. He or she calls out orders from the ticket printer to the meat cutter, then takes the cut meat and places it on a platter, salad or bun for a sandwich. This spot holds the restaurant’s breads, including buns and garlic toast. Other than a table for holding bread, the lone piece of equipment at this station is a toaster, which was recently changed to a wall-mounted version to save space.

After the middle station comes a four-pan steam table, which the chain uses to hold its sides, including mac and cheese, collard greens, sweet potatoes, green beans and more. Culinary staff usually make these sides daily, with backups in the same holding cabinet that stores the barbecued meats.

After plating the meat, the order moves down to the sides table and finally staff place it on the pass-through window. There, table runners deliver food to guests by calling out their name — a more personal method than assigning numbers, Martino says. During slow periods, he notes, a single staffer can handle both the middle section and the sides station.

This represents a markedly different approach than the kitchen set up at Bono’s. At roughly half the size of that kitchen, Willie Jewell’s has a far more compact and efficient back of the house. Ahead of the first Willie Jewell’s openings, in fact, the company’s leaders were afraid the restaurant’s kitchen would be too small to handle high volumes. Now, says Martino, they see how much dead space is in Bono’s kitchen. They have even implemented process and design improvements at Bono’s that incorporate lessons learned from Willie Jewell’s. 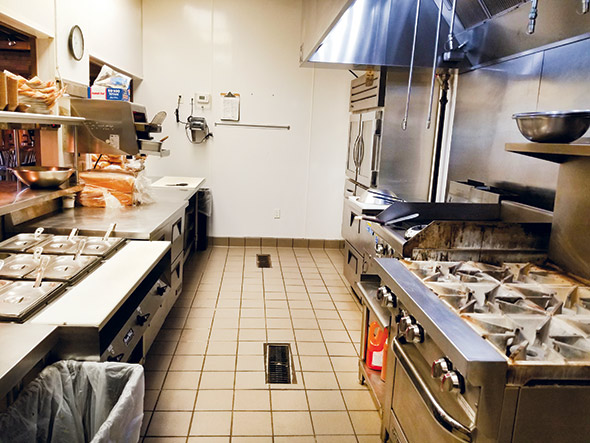 The production line includes just a few pieces of cooking equipment and is designed to minimize steps. Willie Jewell’s kitchen is far smaller than that of its parent concept, Bono’s Pit Bar-B-Q.

An efficient kitchen making authentic barbecue is just one aspect of a successful fast-casual barbecue concept. Put simply, Willie Jewell’s design reflects an old-school barbecue joint. While that may seem like a no-brainer, it’s not.

Recall that one of the benefits of fast casual in general, and Willie Jewell’s in particular, is the low buildout cost compared to similar casual-dining restaurants. For many operations, this includes the use of less expensive finishes and furnishings that, says Martino, can create an artificial aesthetic, such as plastic chairs and faux-brick rubber wall coverings.

Willie Jewell’s leans in the opposite direction. The chain pays extra for the real deal.

“We want to be a barbecue spot that feels authentic, with smoke in the seat and walls. We tried to capture that with Willie Jewell’s, using real wood, with the textures and colors we chose and the signage ... When you walk in the door we want you to feel transported to a rustic barbecue joint,” says Martino.

The chain has a stained concrete floor (not a worn-looking laminate) and relies on local providers for seating (including banquette, booth, high-top and floating two- and four-top tables) and custom millwork. It will even spend more money on authentic materials for the right appearance.

At one point, for instance, Willie Jewell’s used a wood laminate on the walls, but now uses pallet wood.

The menu (static, of course) along with other custom signage uses colors and fonts that impart a slightly aged appearance. The signature piece among these is a sign honoring the concept’s namesake: Willie Jewell, a long-time employee/close family friend of the Adeeb family — she actually escorted CEO Joe Adeeb on his first date —who developed many of the recipes and sauces used today by both Willie Jewell’s and Bono’s.

“We decided when we were coming up with a name, that would be a great homage to her and to tie it back into Bono’s,” says Martino.

Franchisees employing the owner/operator model are the type of partners the company is most comfortable working with, says Martino. The company looks for people with restaurant experience and who will trust the Willie Jewell’s systems and processes instead of trying to reinvent the wheel, he says.

While the chain’s initial growth was very slow — launching at the start of the Great Recession was a stroke of bad luck — expansion has been picking up steam. There are currently 11 Willie Jewell’s, located primarily in the Southeast, with another 4 set to open this year.

“We’ve got a lot of irons in the fire. This is definitely our growth vehicle, especially as trends lean more toward shrinking footprints and more takeout and delivery. There’s no need for big dining rooms and big kitchens anymore, at least for the foreseeable future.”

Willie Jewell's at a Glance